Still only 21, he has the safety net of youth to dampen any fall his career may suffer. It is the apparent demise of his Arsenal stay that must rankle with him. He had made only twenty two first team appearances at St Mary’s before departing for London, and he has made only fifty seven first team appearances in total. It is fair to say that these years are still formative, and we have not seen anywhere near the best that he can produce.

One thing a young prodigy IS meant to exhibit though, is progression. Something to show for the many lessons that are doled out to them in training and in the heat of battle. At Arsenal, there is a ceiling in place which is currently stifling his growth.

In his first impressive season at Arsenal, he amassed 23 appearances – either in his original right-back position or in the centre – and his displays earned him his first senior England cap.

In the following season, he popped up in a Gunners shirt just twelve times. At his age, it is vital he gleans as much gametime experience as possible. Much like a fresh piece of pottery needs the heat of the kiln to finalise its form, Chambers and his fresh-faced kin need minutes on the pitch in order to ensure development.

The major obstacle, from an outsider’s point of view (a fan that has no clue as to how these players perform in training) looks to be Gabriel. The hotheaded South American has sneaked in ahead of Chambers at centre-back, despite having more than a predilection for the rash. His mistakes last season were many, and he quickly went from prospective defensive lynchpin, to liability in the space of months.

Yet, he remains a hurdle in which Chambers is unable to overcome. Why is Gabriel on the figurative top bunk, whilst Chambers has to endure the bottom bunk? When Chambers has been called upon – especially in his first season – he has earned rave reviews. His aerial ability is fantastic, and his reactions are far quicker than most of his defensive cohorts in the Premier League – thanks to his upbringing at right-back. If he is compared to another hot English prospect in John Stones, then he can hold his head high in regards to skill and defensive nous.

It is his second season which has hindered him. As a youngster, he undoubtedly let his head drop when chances to play became scarce. It is then up to the elder statesmen in the squad to ensure he continues to put everything into training, so when he is inevitably called upon, he can hit the ground running.

Again, from our view outside of the club, it appeared as if he managed admirably with adversity. He played regularly with the Under-21 squad, and his demotion to the England Under-21 side was not met with anything but good cheer and a steely look of determination. He has fronted up to the negatives and worked harder than ever to succeed. It points toward a very determined character who deals well with detraction. A fantastic asset to have at such a young age.

Defenders invariably improve with age up to a certain point, which is the opposite to strikers and most midfielders. With age comes experience, and experience is invaluable to defenders. With each game comes a new threat which must be nullified, but these dangers have a specific skillset which is different to the last. Think of each attacker as a Swiss Army Knife, and every one has a different appendage attached. They may all carry foldable scissors, but one may have a nail file, and another may have a horseshoe scraper.  The defenders selected must find a way to silence the threat, no matter the utensil used.

Last season was a waste for Calum, although training each day would hone him to a degree. He craves games, and his progress demands it. So what are his options?

Well, his parent club have reportedly been sniffing around, with a view to a loan being arranged. There are positives to this happening, as he would be given opportunities to shine on a frequent basis, in a familiar place where he would feel just as comfortable as if he was back at Arsenal. He would face off against Virgil Van Dijk and Jose Fonte as rivals for the centre-back spots, so he would probably get more games thanks to his elevated standing.

Or, he could go back to his original position. Whilst I don’t agree with this, as everything about Chambers screams central defender, he would get more opportunities. His display against Borussia Dortmund in the Champions League campaign of 2014 surprised me, when he played on the right of defence and linked up so effectively with The Ox. His footwork belies his defensive leanings, and he has more than a touch of pace when he needs it. He could revert to type if necessary.

The third option would be to continue to fight. Gabriel had the whole of last season to integrate and push his rivals out of the picture, but his inconsistency and his decision making has left the door open for someone to state a case against him.

That player can be Chambers. His inclusion in the recent Under21 Toulon team of the tournament, and his captaincy of the winning side, shows he can take the spot with conviction if given the chance. Pre-season will tell us a lot, and it will also give Calum the very open 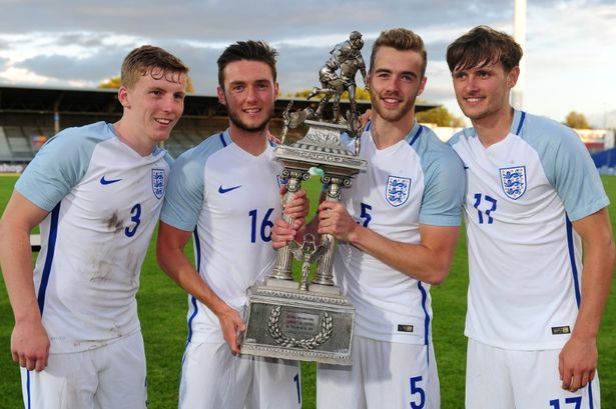 Calum could either be at Arsenal for a very long time, becoming a defensive stalwart for club and country – or he could go elsewhere, where the grass is never as green – just ask a long list of departed ex-Gunners.

The choice is ultimately up to him.