From the hottest temperatures are the most valuable of treasures born. The most precious metals are twisted and formed in unbelievably scorching heat, and under duress are beautiful objects crafted and hewn.

The same rule applies for footballers.

Hector Bellerin – who some rate as the best right-back in the Premiership – had his debut in 2014 against a rampant Borussia Dortmund side and was taught the most severe lesson in a 2-0 defeat. The young Spaniard learned a years worth of lessons in ninety minutes.

It was not just a baptism of fire, it was akin to tying him to a pyre. 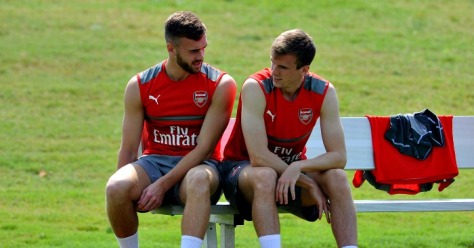 Calum Chambers and Rob Holding went through a similar unveiling ceremony in the first game of last season, when Liverpool smelled a hint of blood and eviscerated the duo in a brutal – if slightly lucky – 4-3 win at The Emirates.

Arsenal were in control when the second half began, but Liverpool’s Mane, Coutinho and their cohorts took advantage of the green nature of the Gunners defensive centre, and cashed in opportunistically.

It was the harshest of lessons, but one that needed to be taught. Chambers was fresh from leading the England youngsters to victory as Captain in the Toulon tournament in the summer and his stock was high, as well as his confidence. An unceremonious bringing back down to earth meant that whatever illusions Chambers may or may not have had about having ‘made it’ were dissipated quickly.

The same goes for Rob Holding. He was making his competitive debut for Arsenal and he must have been counting his lucky stars. Snatched from the bowels of Bolton and now playing a Premier League fixture against Liverpool, Holding could well have thought this was where he deserved to be.

The bottom line that was emphatically delivered to both is that the work had not yet finished for the starlets. The lesson they must learn is that the work NEVER finishes. All top class defenders will extoll this loudly when asked.

This is why defenders reach their peak later than their outfield compatriots. Different strikers bring different challenges and defenders must constantly shift and adapt to meet the task head on.

In pre-season before the Liverpool game, Holding and Chambers saw plenty of minutes and with the pressure off to a degree, they shone. With Krystian Bielik as another youngster given the opportunity to play, the three young defenders gave great accounts of themselves. the level of competition and the lack of competitive heat was not present though.

This is why Chambers going on loan was the best idea for his progress. With Koscielny, Mustafi, Gabriel and Mertesacker as rivals for the two central spots, Chambers’s development would have been hampered by a lack of gametime. With this season-long loan at Middlesbrough, we saw what he was capable of on a weekly basis. It was the perfect way to gauge whether he truly is up to the mark of playing for Arsenal.

The answer is yes, very much so. Chambers has been a pivotal member of the Boro back four which has put up a brave resistance. With their attacking threat being far less than the majority of teams in the Premiership, it has meant more time defending for the Teessiders. A real scrutiny has been on Chambers and he has passed with flying colours.

Rob Holding was retained within the Gunners squad, and his sporadic appearances have been an indicator as to what type of player the former Trotter will be. He plays it safe, is not prone to panicking and makes correct decisions. There is much room for improvement, but at such a tender age, the signs on his progression are that the only way is up. Just look at his display in the FA Cup Final and his shackling of Chelsea’s malevolent force of Diego Costa – the boy done good.

Both players allow Arsenal to plana a little ahead. They represent the future of Arsenal’s defence, and if they can keep hold of Hector Bellerin, then many years of solidity stand in the Gunners future. What other clubs can boast of such things?