A ruthless attitude is perhaps the most vital of attributes that successful entrepreneurs possess. Business acumen can be accumulated throughout a career, and a sound financial knowledge is always desirable – but without the ability to separate personal and business attachments, a potential tycoon will never get close to that personally branded helicopter.

Stan Kroenke is someone who has perfected that art. His comments recently have perfectly illustrated his opinions on the numerous sports teams he has in his portfolio, and it shows the vast gulf between the previous shareholders who resided on the board and Kroenke with his KS Enterprises.

” If you want to win Championships, you wouldn’t get involved.” 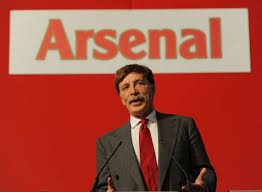 Unfortunately, he has entered an arena that requires a modicum of sentimental attachment and personal feeling. Without it, he is simply the man who owns the majority of Arsenal’s shares. The comments were made at a business expo in the US, and coming from a man who makes a handsome sum from his involvement in sport – they were a tad naive.

The comments can be construed as insensitive, cold, and erring on greedy. They paint a picture of a man sitting atop a gilded throne, frivolously burning banknotes whilst the world burns. It shows that his chief interest is, and always has been, revenue. Cash money.

If you dig a little deeper however, there is a little more substance to his verbal offerings. Newspapers took snippets of his comments, but if kept in context, then a slightly different bent is given to his words.

” I think the best owners in sports are the guys that sort of watch both sides a bit. If you don’t have a good business then you can’t really afford to go out and get the best players unless you just want to rely on other sources of income.  Over there [in the Premier League] it was sort of like ‘well, we’ve got guys from the Middle East, the oil price is over $100, they can spend anything they want’.

“But the problem I saw with all of that; those people can lose interest. It doesn’t mean that they will, but I sort of threw that out there: ‘What happens when the Middle Eastern family, this thing’s costing a lot of money and they decide to go home?’ I said what really happens in those situations is the fans get hurt because the players get picked up and paid if they’re good, the front office gets other jobs.”

Again, it is all about context. When seeing the headline that started the article regarding Kroenke’s comments, I, along with the majority of Gooners, saw it as another indicator regarding the greed of the owner. The stark contrast between the previous shareholders and Kroenke does nothing favourable for fans opinion toward the moustachioed American either.

The previous owners of the shares had an intrinsic passion for The Arsenal. They drove towards a common goal – Glory for the Cannon – and the raison d’être for their involvement was not to chase readies.

What can be clear is that Stan Kroenke’s motives are to make money. What fans should be fretting over is will this be to the detriment of the club?

The short answer is no – at the moment.

Kroenke and his team are shrewd. They realise that a healthy Arsenal can bring in a continuous stream of revenue, as opposed to an ailing franchise. They will seek to boost the clubs reach across the globe, and as long as the club are maintaining their current flightpath, then KSE can rest easy in their Lear Jets.

In regards to pushing the club further, in accordance to how much money the club brings in? That is where Stan Kroenke is fallible.

He has a unique opportunity to take this club and elevate it to dizzying new heights. With a little investment, rather than using it as an occasional £3m debit card,  Arsenal could duke it out with the cream of Europe. They could finally establish the Gunners – and the all-important brand – as a superpower of football.

At this current moment in time, Arsenal are treading water, and the whole fanbase can see a missed opportunity. Stan is facing the ire of Gooners as this seasons title slips away. His comments regarding Championships could not have come at a worse time.

If you are not involved in sport for glory, then you are doing it wrong. Stan Kroenke though, doesn’t see the element of sport. To him, Arsenal are simply an opportunity.  His St Louis Rams ( Now L.A Rams ) side, as well as the other franchises he owns, are all aimed at keeping his fortune healthy and topped up.

His comments though, do also highlight his awareness that his commitment to Arsenal is not a short term project. He aims to continue to push the Arsenal brand and boost the clubs coffers. He states –

What did I learn specifically [from England]? You learn very quickly what that brand means,” said Kroenke.

“We have a gentleman who comes to Arsenal games, he flies his helicopter from South Africa, Cape Town to London quite often. It’s just an example of what a brand can mean, and what we can do in sports.

“We’re all working on that and that’s the big opportunity. Michael Jordan showed it – you can get paid a whole lot more if you can extend your brand. Manchester United showed it. They established benchmarks that people had thought heretofore unattainable, but their brand extension made people want to pay for it.”

Kroenke is indeed in it for the money, as a businessman that is a given. We can of course look back fondly when we had a board comprised of Arsenal fans, but with the influx of cash the Premier League has had over the last decade, our club was always going to be in the shop window.

Now we have Stan Kroenke and his KS Enterprises at the helm, and his opinions regarding investment and pushing the club out of its comfort zone must be questioned. What we can be thankful for however, is that we didn’t end up with a Randy Lerner. Or a Glazer family. Or a Mike Ashley. Whilst Abramovich keeps Chelsea afloat and should be commended for proving everyone wrong in regards to his commitment – if he were to leave, there would have to be wholesale change in order for Chelsea to stay solvent.

Kroenke is aiming for Arsenal to continue on its current path, and fans want to see a different approach, one that takes advantage of the sound financial footing the club can boast of. With his comments separating football from business and him revealing his sole focus, it has shone a light on what he and his company are focusing on. It has taken the doubt from the mystery that is Silent Stan. He and his Wal-Mart fortune could indeed bankroll a revolution at The Emirates, but he seems more than sated with the current situation. He doesn’t yearn for glory, he seeks only a healthy club, which puts him at loggerheads with fans from the outset.

It doesn’t quite make him a villain, but Silent Stan perhaps should stay Silent in the future.

One thought on “Silent Stan Kroenke Reveals His Hand”