With perhaps the most surprising title winner of all time lifting the Premiership trophy, the go-to thought amongst experts and Gooners alike is that this season was a missed opportunity of epic proportions.

This is of course a disservice to Leicester City. Losing only three times all season and refusing to buckle under the huge pressure doled out by all who expected the Foxes to crumble, they showed they were worthy Champions.

Two of those three losses were inflicted by Arsenal however. So many questions regarding the events that unfolded through the season. Where was our title challenge lost? Was it really in March that the wheels came off? Or should we have expected our annual blip and made more of our games beforehand?

Fear not. This article will pore over each month and attempt to dredge up the real reason why Arsenal finished as runners-up. Gloves on. Goggles on. Let’s get started – 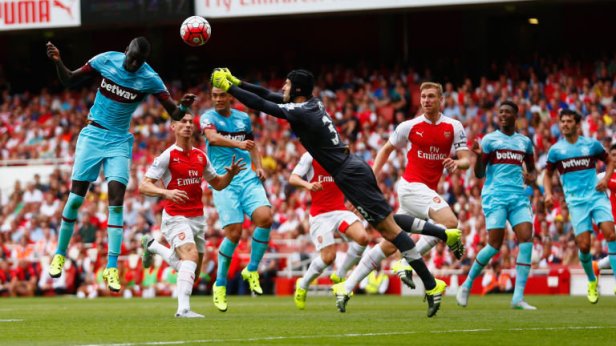 The season started so optimistically. Winning the Charity Shield by beating bogey side Chelsea convinced nay-sayers that we could make the final leap from also-rans to winners. Not only that, the final piece in the Arsenal team puzzle was acquired in world-class keeper Petr Cech…..

Who, in his first Premiership game against West Ham, was at fault. We lost 2-0, and optimism gave way to the more familiar vibes of morose realism.

The next game saw an away victory – a tight 2-1 win over Crystal Palace which was stilted and painful to watch – but more dropped points were to follow.

The perennial phrase ‘a game of two halves,’ was made for our 0-0 draw versus Liverpool. Denied a clear penalty in the first half, we spent the entire second half on the back foot. Plus points for proving we had defensive nous and steel, but our attacking touch had vanished once more.

We finished the month with a hard fought 1-0 away win against Newcastle United.  Not the best start to a title tilt…. 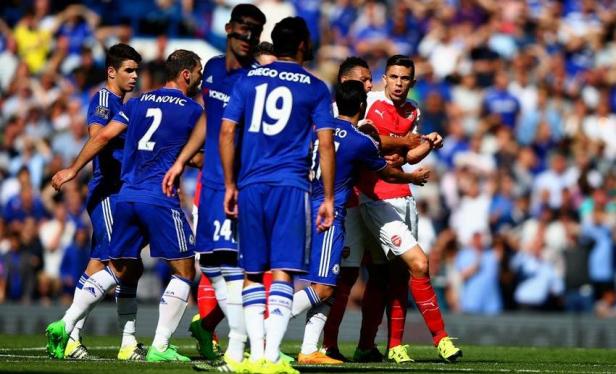 September started well. A routine 2-0 win over a Stoke side that was far removed from their previous incarnations meant that we were riding on the coattails of runaway leaders Manchester City. An awful start to our Champions League campaign though – a 2-1 loss to Zagreb – took away any momentum we always painstakingly gather.

An Arsenal void of confidence is a painful, laborious beast, but a golden opportunity was on the horizon. Chelsea were next up, and if we had thought we had started slowly, then the boys in blue from the Kings Road had to go one better and flirt with relegation.

This was our chance to lay to rest some awful performances and results against Jose and his team, and for Wenger to earn a first win over his Portuguese tormentor.

Everyone forgot to change the record however, so we had another defeat, we failed to score, and there was more controversy with Gabriel being sent off for an altercation with the demon that is Diego Costa. The Brazilian had his card rescinded, but the damage was done.

We rolled with the punches though. A thoroughly memorable 5-2 win at the home of Claudio Ranieri’s Leicester was ninety minutes where our attack clicked for the first time. Alexis and co blew them away with our movement and once again, we were on the crest of a wave. Could we do it on a consistent basis? 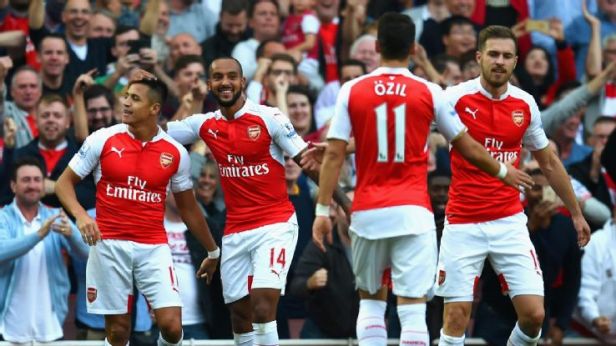 October was our most convincing month for league results, by far.

What a way to start as well. Our 3-0 win at The Emirates over United was our most thorough display. The first 45minutes we were rampant, and Van Gaal’s defence had no answer to the blizzard of questions we threw at them. The second half was a defensive masterclass that showed we have more than enough teeth to deal with the slings and barbs of the high end of the table.

Next up was Vicarage Road, and another 3-0 victory. This was markedly different to the previous game, as the Hornets, for 60 minutes, were more than a match, but they crumbled under the pressure we inflicted on them.

A famous 2-0 win over Bayern Munich followed this, and the belief was coursing through our side, not to mention the fanbase.

A 2-1 away win over Everton was the next triumph. Two goals in the first half was enough to see Arsenal at the top of the league – the first time since February 2014.

The only blip on October was the embarrassing 3-0 defeat at the hands of Championship side Sheffield Wednesday in the League Cup. The fans who watched and attended this game are still attending counselling sessions…..

The month ended with a 3-0 win over Swansea at the Liberty Stadium. All three goals were scored in the second half, which showed that patience and not deviating from an effective gameplan were becoming another arrow to what looked like an impressive quiver.

If October brought us bountiful pleasure, November was the polar opposite. The 2-0 victory over Bayern? Erased comprehensively with a 5-1 drubbing.

We had three Premier League games this month. First up was a 1-1 draw in the North London derby, a point that on the basis of play, we scarcely deserved. Kieran Gibbs was the unlikely hero as he rescued our point from yet another Ozil delivery.

Next was a 2-1 loss at The Hawthorns. We took the lead – Ozil supplying Giroud which gave him seven assists in seven games – but James Mclean equalised, but worse was to come.

Mikel Arteta, on for the injured Coquelin, diverted a cross into his own net, for a heartbreaking cameo. The second half saw the inevitable pressure poured onto a Baggies backline, and we even had a late penalty to restore balance, but Santi Cazorla slipped as he kicked and the ball was sent into orbit.

To compound the growing ill-feeling, we then went to Carrow Road and drew 1-1. November truly was awful, and with hindsight, it was to prove quite telling….

The fixtures came thick and fast in the festive schedule – which was a blessing. When hiccups occur, it is always good that the next opportunity for redemption isn’t far away.

The previous horror show of a month wasn’t quite erased, but our 3-1 over Sunderland at home meant we were at least back to winning ways. It was followed up by a regulatory 2-0 victory over whipping boys Aston Villa.

We were still within touching distance of the top, and dreams had every right to flourish. They downright burst into vivid colour when we defeated fellow title contenders Manchester City 2-1. Two first half goals from Walcott (his goal was one of his few highlights of a poor season) and Giroud, set up a second half where once again our defensive merits were put to the test. Yaya Toure scored a late goal, but our line held firm and the three points reinvigorated our team – and our fans.

Arsenal being Arsenal though, meant we couldn’t enjoy ourselves for too long before we fell on our face. A 4-0 hammering at the hands of Ronald Koeman’s Southampton – thoroughly deserved as well – showed that whilst our squad may be stronger, our mentality was fragile.

We ended the month with a 2-0 win at home over Bournemouth, but the result against the Saints had left scars. We were at the top of the league at the halfway point. A great position to be in for the new year.

The second half of the season to follow in Part 2!