How do you judge the highest highs and the lowest lows? The peaks that made you giddy? the troughs that had you on the ropes?

Arsene Wenger’s 22 year spell as Arsenal manager has finally ended the rollercoaster ride that has in recent years, kept journalists in a job and fans heading for the exits.

His tenure can be split into sections, with the first decade being the reason why expectations are so very high now, dragging the club firstly into contention, and then ensuring its survival at the forefront of a sport that was transforming rapidly.

Then came what most know as the stadium years, when The Emirates required funding and the fallout from this was the transfer budget had to be created, rather than given. Perhaps his greatest feat was keeping Arsenal in the Champions League during those lean years, when other clubs were burning money to keep warm.

And then came the years of doubt, where Arsenal were supposed to herald in a bright new dawn, free from the albatross of uber-debt around our neck, we could now compete with the big boys, but instead, we slipped further down the ladder as Wenger’s shortcomings in tactics and his recalcitrant approach to these failings meant that not only was a first title since 2004 well out of reach – we also let in clubs that were previously playing perma-catch-up.

If we look at Wenger’s highs and lows on a game by game basis, naturally we’ll look to his first ten years for the best moments, and his last decade will be littered with references to instances when we feared the worst.

But there are matches in every season that could be nominated for either.

Our 8-2 and 6-1 stuffings at the hands of Man Utd are obvious picks when highlighting nightmares. What of our 6-0 hammering by Chelsea though? Or when Liverpool pasted us 5-1? We’ve also racked up a few derby defeats as well, after going so long without one. Let’s not forget our European nightmares too (we don’t talk about Paris).

In terms of high points, our 1-0 win at Old Trafford to win the league in 2002 was golden-hued, and I’ll never forget our recent FA Cup wins. We thumped Inter Milan at the San Siro, we were the first English club to beat Real Madrid in the Bernabeu, and winning the league at the pisshole down the road ranks pretty highly too.

So many of either to mention, but if I had to pick just one of either…

This match broke United’s previously unbowed spirit. We had the perfect gameplan, we had the back 5 as the perfect foundation, Vieira and Petit were patrolling midfield and in Marc Overmars, we had a weapon that was unanswerable. The flying Dutchman chased a flick on and headed the bouncing ball into his own path, before finishing low past Schmeichel. It was a signal, to both Fergie and our own fans, that we were a real force. It was unforgettable, and it was the beginning of the best years as a Gooner for quite some time – if ever. 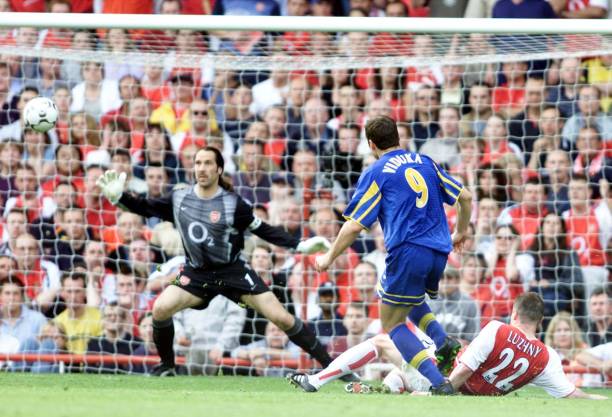 We’d won the double the season before, and humiliated United in the process by winning it at Old Trafford. The next season had been given the perfect platform, and we made it count for the most part, but our slip against an underwhelming Leeds side managed by Peter Reid. Mark Viduka had one of his games where he was unplayable, and we shot ourselves in the foot. It handed the title back to United, meaning we failed to regain the Premiership yet again. This was a title we should have won, but defeats like this hampered us. Thinking about it even now gives off waves of ‘what should’ve been,’ and of massive missed opportunities.

These are just my own choices. Mentioned before, there’s plenty of both to choose from. Our 3-2 defeat to a weak Man United side and subsequent loss to Swansea City in 2015 ran the Leeds loss unbelievably close.

What are your personal high and low matches in Wenger’s reign? Drop me a comment, it should make for interesting conversation!