There’s been a lot of change at Arsenal recently, but in terms of playing personnel, the focus has been very much elsewhere.

Aaron Ramsey reminded everyone of his importance to Arsenal last season with his consistency. His ability to make a difference on proceedings helped us stave off more than a few negative results, and served as a reminder of how valuable he really is.

As he enters his last year under contract, the decision on his future is perhaps his most important yet.

Put yourself in his shoes and mull over the variables. 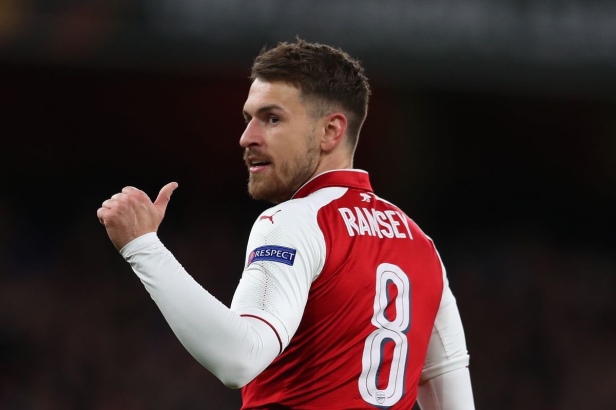 He is entering the prime of his years, knowing full well he could cash in his chips and earn more elsewhere. Somewhere that his chances of glory aren’t so unsettled. Somewhere that may well see him as a central midfielder rather than an asset that can be used in alternate positions. Somewhere that offers him a change he may well crave.

The 27 year old has been at Arsenal since 2008, and has intimated in the past how he would be open to playing in a different country, if it could further his career. Well, his career is at the biggest crossroads so far.

He stood by Wenger as the Frenchman stood by him when he suffered his horrific leg break. The comfort of familiarity was probably an enticing one in the seasons that followed, but now Wenger is gone, and Unai Emery is the replacement – and everything is now in flux.

Emery is known to be quite demanding on the pitch, and he will have to be just as severe at Colney if he wants to implement the pressing game which served him so well at Sevilla. Fitness levels will have to be optimised, but Rambo should have this covered. Another plus point aside from his stamina levels is the reports coming from all corners of the media, suggesting Emery wants to build a team around the Welshman and Pierre-Emerick Aubameyang.

If this rumour is tangible, then Ramsey could well be tempted to stay. The problem though, is the unknown factor. None of the current squad will be able to tell if the future is full of trophies or struggle at Arsenal. Should Emery’s tactics stick, then Rambo and co could be in for an enjoyable stint.

If not, then a decision to stay could have ramifications and regrets.

Ramsey’s stats last season were impressive, but all were sourced from his attacking prowess. Goals, assists, these are the parameters of an attacker, and a world class attacker is exactly what he is. He does track back, but his tackling and defensive input is not exactly up there with the best of the central men.

It’s a good thing that Emery enjoys employing a 4-2-3-1 formation then, as this offers Ramsey a spot in one of the four in the attacking quartet. It is safe to say that the striking slot will be taken by Aubameyang, and one of the three in behind the Gabon man will be Mesut Ozil – who could play from the left. Then that leaves two spots, and given Mkhitaryan’s links with Aubameyang bearing fruit, then the Armenian should book the number10 spot.

That leaves the spot on the right for the Welshman, and he has done extremely well there before. Can he provide the defensive merits that a wideman needs to have though, in order to satisfy Emery?

The only other option is for Ramsey to use his superhuman stamina and improve his defensive leanings so that a central slot won’t leave gaping holes in our play. Ramsey needs a partner who will cover him – his greatest asset is his ghosted runs into the box – but if he can ebb and flow with the game and provide another covering body when things get messy?

Then Emery may well have the answer to our central midfield conundrum. The Spanish boss is used to having excellent midfielders who do their duty – the finest example being Marco Verratti at PSG.

Ramsey finds himself in limbo.

He can either stay and fight, prove himself to be a central midfielder who can possess both sides of the game.

Or he can go elsewhere and earn more cash, perhaps more trophies.

What will be in the level-headed player’s mind though, is how close he is to becoming an icon at the club.

His tenure at Arsenal is a long one in comparison to the majority elsewhere. An extension and a relatively free injury record in the near future and his appearances will skyrocket. Ally that with a title win and Rambo could well be one of our best.

So many if’s – what does Rambo do?