It isn’t just Arsene Wenger that deserves a fitting send-off.

How’s about an Islington born boy who has been at the club in numerous capacities since 1986, making the newly formed Arsenal Ladies side the most successful English ladies side in history, winning thirty two honours, being awarded an OBE and now is the man responsible for ensuring our club are kitted out? 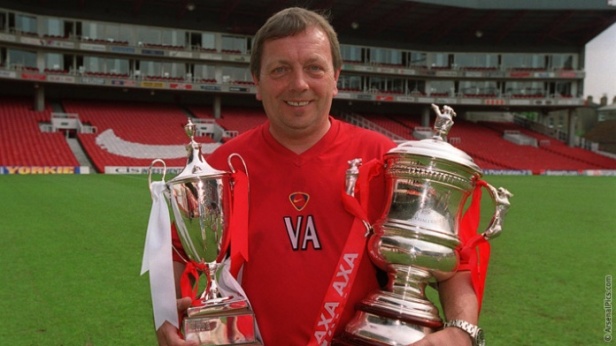 Vic is the embodiment of what us fans want from a player. True dedication, nothing but love for the cannon and puts everything into his work. Akers has not only served Arsenal well – he shone a light on the Women’s game that wasn’t illuminated previously.

His Arsenal Ladies team’s – and it is plural as he reinvented the side regularly in his tenure as Manager – highlighted the skills on show in the female game. His all-conquering Gunners side were also the first English team to lift the European Cup.

Thanks to his work, the WSL is now growing at an exponential rate, but from a humble seed do mighty oaks grow, and the bedrock for the success in today’s incarnation of the English Women’s game lies at the feet of Vic Aker’s Arsenal teams.

The man famous for sparking the ‘Postman’ fashion trend – perennially in shorts, no matter the weather – Akers has been a mainstay during the reins of both Graham and Wenger, and this season will be his last at the club.

His work will be continued by his son, but not much is known about Akers prior to joining Arsenal as part of the Community scheme the Gunners were running at the time and continue to do.

Vic, much like other successful managers, was a journeyman professional football player, playing as a full-back during the 70’s for the likes of Cambridge United and Watford. Upon hanging up his boots, he took the chance to join his boyhood club working behind the scenes and strengthening the link between the club and the locals. A job very much close to his heart being a local boy himself.

It will be his efforts as Arsenal Ladies Manager from 1987 through to 2009 that set him apart however. 22 years and 32 trophies is a record that sees him in illustrious company, and even in the last decade when competition for trophies became fiercer than ever, his tactical nous and training ground work saw his Gunners girls stay ahead of the competition, even winning the European Cup in 2007 – something the currently cash-rich Chelsea and Man City Ladies team’s have failed to do.

Vic Akers will no doubt say goodbye to the club with well-wishes from everyone at the club, but fan recognition for his service will be lower than he deserves, simply because he flew below the radar, letting his work do the talking rather than take the plaudits he so richly warrants.

Arsenal have been lucky to have had some bona fide legends in their time, but Vic Akers is without doubt one of the biggest. We owe him an enormous debt of gratitude for what he has achieved and also – how much he loved the club when he did it.