At the start of this season, the majority lauded what we perceived to be the finished article. Finally, after what had seemed an age, our squad had the necessary tools to compete with the very best in our league.

Year after year of putting up with strict budgets and excuses from the Board and Arsene Wenger had begun to take its toll on our patience. Promises made and subsequently broken regarding our competitiveness only served to push our tolerance levels to their highest.

It was time, and like a Hollywood script, we finally rode into the screen in the nick of time with the winning formula.

Granit Xhaka had performed admirably for Switzerland in Euro2016, and his displays in the Bundesliga for Borussia Monchengladbach had the experts purring about his talent. Our midfield had been crying out for a potent mixture of pugilist and transitional master, and Xhaka from deep had shown he was adept at both.

We had all been painfully aware of our defensive shortcomings, with Mertesacker getting no younger and Gabriel yet to prove his worth. When we finally met the asking price Valencia were asking for German international Shkodran Mustafi, it appeared excellent business.

Mustafi was in La Liga’s team of the year in his time with Valencia. He was a regular in Joachim Low’s Germany squad. In his first months as a Gunner, he did not taste defeat.

It appeared as though we had finally found the secret recipe. Our patience had been rewarded.

The cherry on the cake was Lucas Perez.

The striker from Deportivo La Corun had an impressive goal return, and his clever touches in and around the box looked like we had the perfect attacker to complement our style of play. 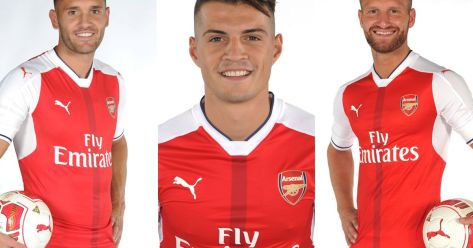 Fast forward to the present day, and a large percentage of our fans think our players are suddenly not good enough.

What has changed, aside from results?

Results are the currency on which football lives on. When we are not achieving results, then everything is open for discussion.

Our level of talent in the squad has not changed, so why do a large percentage of our fans now think we need a clearout?

It is down to mentality.

When the chips are down, it is the competitiveness, the desire for victory that picks up players from their haunches and ensures they carry on. Well, an unacceptable run of results from January through April cost us dearly and have left this season as the worst under Wenger, but nearly every player has at times appeared to be downtrodden and lacking the spirit to fight their way out of this problem.

And it is exactly this that we need. That Arsene Wenger needs in order for our team to start crawling back up the league. As the players seem unable to reverse the fortunes on the pitch and sometimes don’t appear as if they want to – does the blame for this fall at the manager’s or the players feet?

Both. The players we have at our disposal are far better than results suggest, and it is quite obvious the current regimen does not fit well for our players. They have seemed ill at ease. Our players don’t look like they want to put in the effort.

Whether that is because they are assured of their place and have lost their edge, or it is down to tactics is unanswerable. The only people who know the root cause of our apparent demise are the ones who are in our dressing room every week.

A clearout of our players may be a bit hasty though. Early in the season, they were good enough in all of our eyes, as results were of a sufficient standard to see us near where we perceive them to be. Now the results have dried up, but these are the same players as before.

A different manager may just be the exact ingredient needed to summon the best from the players who are not doing the business for us right now. It may need someone in the squad to finally step up and give them the tongue-lashing they sorely need.

It may require this group to wake up and realise they are doing our club and our badge a great disservice, and they MUST do better.

Either way, we have seen they are capable of doing better than they are right now. Have we all become unable to discern what is simply bad form and what is a lack of skill?

Some players have worn out their ‘Get Out Of Jail Free’ card, and some deserve the benefit of the doubt. A lot will happen in the summer and pre-season, and it will tell us if these men have the fire in their bellies that we need, or if the fire has been put out.

One thought on “Summer Clearout? Or Second Chance?”