When Mesut Ozil signed for Arsenal in the summer of 2013, the German made it abundantly clear that his decision to leave the glitz of Real Madrid and sign for the Gunners was down to one man – Arsene Wenger. 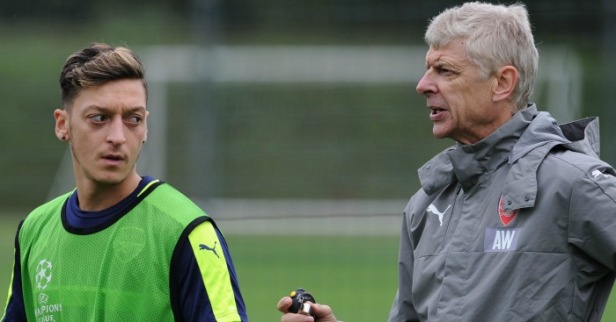 The cynical among us will also point toward his princely wages as another thing that would have swayed his decision-making process and they would have a point. What undermines this particular topic is that although the weekly amount he earns for his services is amongst the highest in the league, it is an amount he could have recieved if he had moved to any other large scale club.

Mesut Ozil has previously focused on the confidence Wenger has in him and the professional candour he shares with his playmaker. The relationship between each of them is of respect and the fact his Boss rates him and expects so much of him is bound to make Ozil feel far taller than he actually is.

Imagine if you went into work and your boss pulled you aside for a ‘chat.’ After immediately questioning what rules you might have broken over the course of the last month, you would sit down and wonder why they have decided to focus on you. What have you done to deserve this? Then fast forward to ten minutes later after they have told you in no uncertain terms how brilliant you really are – you would float out of that office and your work would benefit as a result.

Man management is a whole different type of role that a modern day gaffer must incorporate into their day-to-day job. It is not enough anymore to pick an optimum system for the team and scout the next few opponents effectively. Each precocious talent requires a different tact to lure the best out of them.

Mesut Ozil needs to feel trusted. He requires that bond between he and his manager. Wenger believes in Ozil, and the majority of the fans do to. His relationship with Gooners helps massively, but it is that invisible tie between the boss and player that will hold firm when other clubs and contract negotiations come calling.

Mesut Ozil’s deal runs until the summer of 2018. It is the general concensus that the German is fishing for more money. At 28, the contract he manages to obtain next will be his biggest and most important. It will see him past his prime age where he can choose his destination from any team in the world. When this next contract duration is up, he can of course go to the majority of clubs and nations,  but he will be well into his thirties and the demand will be far less than the clamour would be if Ozil’s name was dipped into the shark tank.

Make no mistake – if we fail to come to an agreement with Ozil, he will have no trouble whatsoever in finding a team that is willing to pay him his market worth. Ozil’s latest comments seem to highlight a different requirement that the German’s camp want settled before any ink is splashed on Arsenal headed paper.

Ozil said of his contract negotiations “The club knows that I am here most of all because of Arsène Wenger.
“He is the one who signed me and he is the one whose trust I have. The club also knows that I want to be clear what the manager is going to [in the future].”  – courtesy of the Daily Express

That is pretty transparent in regards to what the stumbling block appears to be. As Arsene Wenger ticks down the last year of his contract, the club and apparently Mesut Ozil are waiting on tenterhooks to see whether Wenger will sign yet another extension or he will bid adieu to the club with which he is now intrinsically part of.

The next announcement is key. After a statement of this nature from Mesut, it means that the club will not announce an extension or otherwise until they are ready to also declare what Arsene’s future will be. As soon as we are all made aware of what our playmaker is going to do, we will automatically know what our manager’s future will be.

If Ozil decides to stay, then we can assume Wenger will too. If Ozil goes, then we will probably be in the market for a new manager. The two are now one and the same. The announcement has all fans – both pro and anti Wenger – waiting for any slice of news as to the immediate future of our club. A new manager will radically change the the scenery we are to see over the next few years, and it will have huge ramifications on the future of not only Ozil’s destination, but other players too.

Ozil made the life-changing decision to come to London, and he has openly declared his love for the city. You need only scroll through his Instagram feed to see that he loves the freedom this bustling city brings. His career hinges on more than his setting when not at work. He decided to switch Madrid for London because of the trust Wenger placed in him – something that was missing from the tail-end of his time at the Bernabeu.

You cannot fault the fact he places so much importance in what his boss will do. If Ozil signs a contract and then Wenger decides that he will call it a day, it leaves Ozil in a potentially sticky situation.Who knows what kind of manager will replace his current gaffer?

Ozil wants the setup he enjoys right now. That is testament to how happy he is at Arsenal.

It all hinges on Wenger, whether we like that or not. Keep your ears pressed close to the ground – the next announcement will be positively earth-shattering.

6 thoughts on “Ozil Waits On Wenger ”