The very definition of the perfect day at the office.

This comfortable victory sees Arsenal climb to third in the table and match the result of the shadow dwellers who won at home to West Brom. Arsene Wenger can take some satisfaction from the manner of victory, especially as Swansea did provide some hairy moments when we toiled at 1-0. We showed the bottle that we needed in our recent comebacks against Preston and Bournemouth, but this time there was no comeback required. 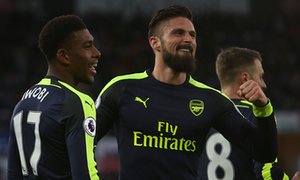 This win also puts an end to our recent poor away record, with no win in three prior to this result, and this will hopefully be the start of a sequence of games where we can mount some decent form. The ninety minutes at the Liberty Stadium is reason enough for optimism to shine through the Gooner masses, as possession was bossed, chances were created and our defence stood strong.

The same team that heroically came back from capitulation against Bournemouth two weeks ago was named, and that meant Olivier Giroud again enjoyed a starting role. With four goals in his last four games, the Frenchman was on fire and he would be the man to break the deadlock.

Some neat interplay saw Aaron Ramsey able to scorch a pass across the six yard box. Giroud was lurking but was inches away from the touch which the pass needed to divert the ball into the net. Alexis retrieved the situation wide on the left and his scooped pass was met by the head of Ozil. The header was blocked but Giroud cleaned up with a neat finish from six yards in an unmarked position.

It was deserved, as while Swansea were posing an intermittent threat, Arsenal were slowly cranking up the heat. This was to be the only goal of the half though, despite some pressure from both sides.

Cech had dealt with whatever had come his way, and former Gunner Fabianski had also snuffed out some good opportunities in the opposite goal. At half time  the Gunners were ahead, and it was soon to be doubled in the second half.

Nacho Monreal stopped an attempted counter with an outstretched foot and the ball bobbled back into the Swansea box. Alex Iwobi was alive to the loose ball and he ran onto it and fired toward goal. The ball took a huge deflection from Jack Cork and the ball arced over Fabianski and into the net. It may have been a huge slice of luck, but it had been ten concentrated minutes of pressure from Arsenal after the break and the home side had been desperately doing everything to stop Arsenal from scoring.

Just over ten minutes later, Arsenal put the game to bed. Iwobi was involved again, as another quick conversion of possession and a great pass put Iwobi into the box. He was being tightly marshalled, but a few shimmies from Iwobi’s locker gained him half a yard of space. He chose to square the ball and that man Own Goal once again made the difference, spinning the ball in off of Kyle Naughton’s heel.

Alexis got in on the act six minutes later and Iwobi was again the difference maker. His slide rule pass set free second half substitute Oxlade-Chamberlain, and his cutback found Ramsey. Ramsey was all set to fire but was clipped and the ball lurched forward. It was snaffled up by Alexis like lightning and the game was cooked.

There was much more incident and noteworthy stuff during the game, but here are the five keypoints from the match;

Some are bemoaning the fact we have resorted to last seasons shape. They have a fair point. The fluidity and sharpness we have when Alexis plays as centre forward is not present when Giroud is up top. Five goals in five games though, tells the other side of the story. We always implore managers to pick a side based on form and not reputation, and this is the result. Whilst we all want Lucas to play and he cannot do anymore to implore Wenger to pick him – we must use Giroud whilst his purple patch is in place. Alexis is still our first choice, but a player must play when he is in form – otherwise what is the point of the rest of the squad trying so hard?

Iwobi over the hump 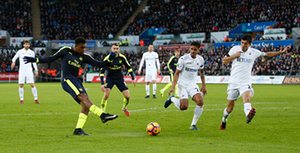 The shaky spell that every youngster will suffer from after making their debut? Iwobi had that at the start of the season. The last few games – and increased competition from The Ox – has seen ‘Big17’ pull out of his slump and rise above it. He has shown he really is the real deal and his touch and passing was there for all to see. He can still be polished, but what promising signs from this youngster. He is only going to get better.

A competitive start for once

The last few games has seen the return of an ugly trait. The sluggish start. Too often we have let teams gain the initiative mainly due to our inability to wake up from the start. This game we at least were at the game, and we put up a fight. There is plenty of room for improvement, especially as we all know how we can start games, but this was a step in the right direction.

This partnership has always had promise, and some have always seen its potential (I cannot claim to have seen this partnership as the best we have to offer, and I still do not). With Santi, Elneny and Coquelin all missing, this combo simply had to work. The mandatory starting of both has helped forge a partnership and it is slowly starting to form. The test will be our next big game – early February against Chelsea – but the signs are good. Balance between defence and attack has been sensible and both look to be potent. Good signs and long may it continue.

Winning the next few games

Every game is a must win. With the smallest margin for error, it seems any dropped points have the largest ripples in the Premier League pond. With the next games against Burnley (at home crucially) and away to Watford, six points are the order of the day. A draw at Stamford Bridge in the subsequent fixture would not be the worst result, but maximum points against these teams we should take to school will instill confidence and hopefully see the teams around us drop points as we have done recently.

There was a lot more incident in this game. Ki’s booking for simulation after we had taken the lead, Cech’s return to a semblance of form, the return of Koscielny, the dissatisfaction from Alexis when taken off in the second half – but the points above encapsulate the game as a whole – hopefully. I hope you enjoy reading, and above all, enjoy the win.

It’s not often we have nothing to moan about. Enjoy it.