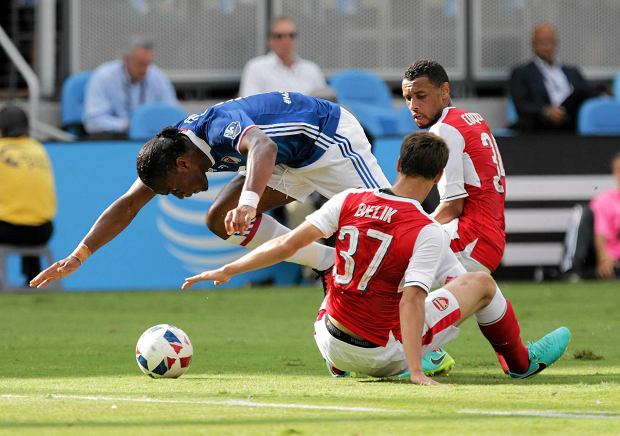 Krystian Bielik joined Arsenal in January 2015 from Legia Warsaw as a defensive midfielder, but it is his conversion to central defence that has seen him encroach upon first team territory.

Fans expected much from this Polish prodigy, reports of his fast track to the Legia first team, and his overall technique, saw him unfairly compared to Patrick Vieira, but Gooners would have to wait to see him take to the field in the first team.

His debut was made in the inauspicious – and quite frankly disastrous – 3-0 mauling at the hands of Sheffield Wednesday in the Capital One Cup. He replaced the overwhelmed Glenn Kamara in defensive midfield, but his development in defence had already far before then.

It was only a few months into his Arsenal career that his talents were perceived to be a fine fit for the backline, and he started to make appearances for the Arsenal youth team in defence ( thank you to Jeorge Bird, who you can follow on Twitter at @jeorgebird if you want the heads up on all Arsenal youth ).

Bielik had made an astronomical rise at Legia Warsaw in his short time there. He was just 16 when he made his bow, and it seems that Bielik is more than familiar with defying odds. You need only look at his displays in this bout of pre-season friendlies to see that Bielik has again made huge strides in his progress.

Appearances in the 1-1 draw against RC Lens, and the victories over the MLS All-Star team and Chivas de Guadalajara, have underlined the potential that Bielik possesses. In particular, his half that he played against the creme of the MLS showed that Bielik may yet be an option for the near future.

Tasked with quelling the threat of David Villa and perennial Arsenal destroyer Didier Drogba, most would have fairly been of the opinion that the Pole would struggle. Throw in the fact that his partner at the back was new signing Rob Holding – and you had a recipe that potentially could have been another crushing blow to his hopes akin to the Sheffield Wednesday nightmare.

We needn’t have feared though. His performance was imperious. Rob Holding may have grabbed the headlines, but Bielik and his composure at the back was just as important. He also showed he was more than adept at playing the ball out from the back, being the catalyst for moves. His origins in midfield seemed to provide him with just another arrow to his quiver. His passing seemed slick, and his awareness was on point.

Another plus point was his physical prowess. His aerial duels with Drogba were compelling viewing, and he more than held his own. The fact that Bielik is still in his teens and he is capable of this level should inspire much confidence.

Could this mean that he can make the step up this season? Probably not. He has much competition for a role in the heart of the back, with Koscielny, Mertesacker, Gabriel, Chambers and Holding ahead of him in the pecking order. Once again, the Capital One Cup represents his best option this coming season. His season for the youth team has done him no harm though, it appears, so another term for the reserves may just elevate him still.

If his appetite for football exceeds this level though, then a loan spell for a Championship side – or even a Premier League team – beckons. There would be no end of takers for such promise, and his development may just require a keener test than he faced last season.

Either way, Bielik is a testament to the good work the coaches are doing for our kids. His advancement is proof that what is taking place on the training fields is working, and Bielik is reaping the rewards.

He may yet have to show patience, but his time may yet be coming. The answer to Arsenal’s defence in the next few years may comprise of three parts – with Chambers, Holding and Bielik all impressing when given the chance.

It is good news for Bielik. His path may yet be long, but the distance he has to cover to reach his goal is far shorter than it was when he joined.