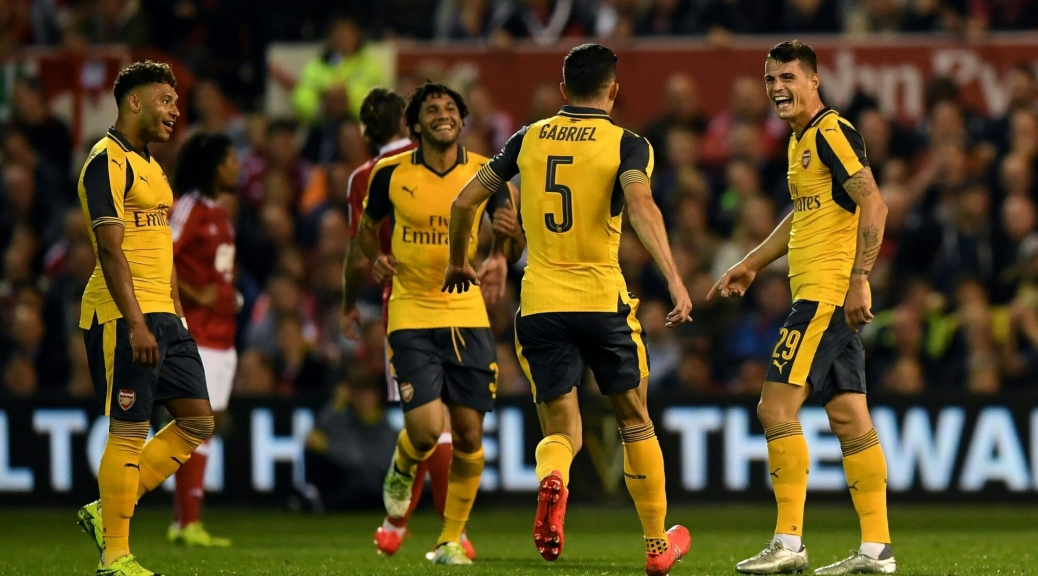 Seen as a gamble before kickoff, the heavy mix of youth with a few experienced heads paid dividends as Arsenal dumped Forest out of the EFL Cup and made their way to the Quarter-Finals.

A Lucas Perez double – his first goals for the club – a Granit Xhaka exocet and The Ox from a Lucas assist, gave Arsenal the win, and there were a few of the youngsters who really impressed, as well as some who are trying to force their way from the bench to the first team.

Xhaka and Elneny mixed well, and did their prospects no harm, and Chuba Akpom was involved in most of the moves which broke through the Forest defence. Lucas Perez in only his second start was effective, and despite a few shaky moments, the defence as a whole coped with the variables of unfamiliarity and lack of minutes, to keep out the home side.

The team was liberally sprinkled with youthful talent, and perhaps more so than in recent years, but the experienced pro’s that were in the team gave the side a real edge.

Lucas Perez started only his second game since arriving in August, and the midfield base of Granit Xhaka and Mohamed Elneny – who represent some fans optimum central combo, provided the foundation for prolonged spells of possession. In defence, Gabriel returned from injury to partner the promising Rob Holding, and Kieran Gibbs provided a certain reliability on the left of the backline.

The Ox was given another chance to impress, on the right of attack, and Chuba Akpom started on the left of attack. Most surprisingly, and pleasantly, was the choice to include the much heralded Jeff Reine-Adelaide in the Number10 position, and this was the best chance fans have had in quite some time to get a close look at the young Frenchman. It was also his biggest opportunity for the first team to date. ‘The Jeff,’ in flashes, showed that the hype could be deserved. Good vision, allied with excellent control, if he can improve his strength and his concentration, he will be part of the long term future of the club.

Oxlade-Chamberlain again flattered to deceive, and patience has to be running a little thin, as it is in the stands. Frustrations toward the England man is mainly due to knowing what he can do, but his lack of consistency, and his lack of growth, means The Ox is more or less the same player we signed. His goal was a great finish, and it provided that little flash and reminder of what he can do, but his whole display could again be better. It seems the best of him always comes to the surface when the pressure is off and the game is in the bag.

There was plenty more to pick out from within the ninety minutes, but here are 5 key points from the game:

Lord Bendtner has still got it, good and bad –

Within twenty minutes, we saw the best and worst of our former striker. He put a chance on a plate for Patjim Kasami who screwed wide, held the ball up well and had a great effort just off target, but also put in a tackle on Granit Xhaka that was verging on X-rated. The Dane was bombed out of Wolfsburg in the summer, and was branded a ‘menace’ by the Board at the German club, but he certainly still has something to offer, but he needs to rein in his flamboyant ego if he is to resurrect his career.

Granit Xhaka has dynamite in his boots

The Swiss star has the backing of nigh on every single Gooner in regards to being in the first XI, and we are all more than aware of how effective his passing is, and how destructive he can be in the face of opposition attacks. What is maybe less known is his ability to shoot from distance. Last weekend he scored our 4th goal in our win over Hull City with a howitzer from 30yards, and he opened the scoring in this tie with a shot from similar distance. It took a slight deflection, but it seemed to be going in anyway, even when the keeper made contact with it! The clean connection he seems to obtain means that his boots could yet be a viable option of attack. If Wenger allows long range shots that is!

Chuba Akpom may just have an Arsenal future

Named on the left of attack, it was going to be interesting to see how the young England lad fared out wide and cutting in, but we needn’t have feared. He had an early chance which the Forest keeper did well to stop, and his link-up play, which comes to the fore far more out wide, was impressive. It was he who also latched onto a through ball which allowed Lucas Perez to score his first Arsenal goal, via a penalty. He isn’t a one-trick pony, he can do more than score goals, but it is how many times he hits the net that he will be judged upon. It is nigh-on impossible to decide if he will be given a shot in the seasons to come, but on this display, he’s giving it everything he has got.

Gibbs was the right choice for Captain

The boy – although he’s far from a boy now – has been at the club since 2007 and is the second longest serving player behind Theo Walcott. It isn’t simply his tenure that means the armband was warranted though. He has been in and out of the side for two years now, and it is ongoing. Have you ever heard him moan via the media though? He has been the utmost professional, and he isn’t just picking up his paycheque either. Whenever called upon, he has done a solid job, and if given a run in the side, he would not let anyone down. He isn’t the vociferous type, but the youngsters on the field can look to Gibbs for the example to follow, and aside from the early mistake which allowed Bendtner to set up Kasami, Gibbs did the shirt, and the captaincy, proud.

We may have another viable penalty taker – and Lucas is it

Alexis may be able to give defenders twisted blood, and he may be able to play as a striker ( time will tell ) but he cannot be considered for penalty taking duty. Santi Cazorla is the nominated spot-kick man, but Lucas Perez scored his first goal for the club in this game, through an accomplished penalty that indicated he is a reliable option if the need arises. On the whole, Lucas played well, but the service again wasn’t exactly plentiful. His movement was ok though, which Ozil will enjoy, and getting off the mark will relieve a lot of pressure.His second goal also exhibited his strength, as he shrugged off Michael Mancienne and had the composure to round the keeper before tapping home. He then registered an assist, a slide rule pass for Oxlade-Chamberlain to finish, and it was a great display from the hitman from Deportivo.  Let’s see how he goes from here. The next penalty earned should be a straight fight between the two Spaniards.