The old adage goes, “If you love something, let it go.”

Well, in both of Arsenal and Tony Adams case, to tear themselves away from each other must have been an incredibly difficult task.

You see, both go hand in hand. Arsenal and Tony Adams cannot exist without the other. When you think Arsenal, then surely Tony Adams would be one of the first you envisage. When you hear the name of Arsenal’s greatest ever captain, then you think of Arsenal. 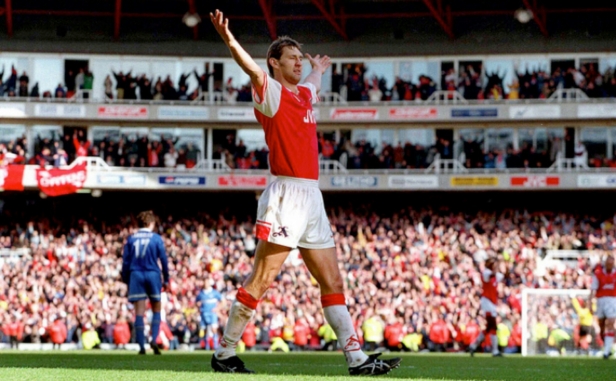 So, surely the news of Tony Adams rejoining the club after several years in the wilderness is a source of joy?

At least, it was – until Mr Arsenal flew the coup once again after an incredibly short tenure as Youth Coach, to give in to the lure of a shedload of Yen.
Fans have seen many notable former players leave the Gunners nest recently, men who could add their valuable experience and talent to the Colney fold. Mikel Arteta, Patrick Vieira are just two who smack of a missed opportunity for our coaching team.

Tony Adams played his last season in 2002, and his parting gift to his adoring Gooner faithful was the Double. His body had put it all on the line, and it was now time to impart his footballing wisdom in a managerial capacity.

His leadership qualities cannot be questioned, and the captains armband ran far deeper than the material that sat proudly on his arm. For more than fourteen years, he was the symbol that every teammate looked to when inspiration was low and the opponent was baring their teeth. He never buckled, he never wavered, every battle was another opportunity to test himself, including the most difficult time he faced – the fight with addiction.

His managerial career though, is in the starkest contrast to his playing career. He began his ill-fated journey at Wycombe Wanderers, but relegation soon followed, and after a year, he left, citing personal reasons.

From the Chairboys, he found himself in the Netherlands, coaching the youngsters at Feyenoord, and then Utrecht. It wasn’t long before the Premiership lured him back in though, and Portsmouth were to be the recipient of his services.

He was appointed in the capacity of Assistant Manager to Harry Redknapp, and that season saw Pompey’s highest ever finish in their history, and a victory in the FA Cup to boot. The next season, Redknapp departed, and Adams was to be given his chance, despite very little in the way of top flight experience at the helm of a club.

He had sixteen games, and earned ten points. It appeared as though Adams could not convert his obvious expertise on the field, and the experience he accrued, to managing a football club.

From Portsmouth, he travelled to Azerbaijan, and FC Gabala. He stayed a year there, and again left the scene, only to return two years later in 2013 as Sporting Director.

That was the last job he has had in the fierce world of football management, and he has spent his time with his Sporting Chance clinic, which aids professional sports stars with their addiction problems.

Now, it is apparent that Arsenal welcomed him back into the fold, and it appears as though it was a nod to previous coaching structures. Is there any person better qualified to instruct young starlets about the ‘Arsenal Way?’ The very way to carry yourself, to have impeccable conduct off the pitch, as you represent one of the most illustrious of football clubs. It is an honour to wear the cannon on your chest, and they should never take it lightly.

Adams joined another player who is cast in bronze outside The Emirates – Thierry Henry. Both of these icons would have ensured the Under-18’s were be versed in not only skills on the pitch, but making sure that these youngsters carry on the traditions that make Arsenal such a unique club.

Some men are destined to be entwined with their club for a lifetime. Temptation will always follow a player, but if staved off, they have an opportunity to forever ingrain themselves into the folklore. Adams goes beyond this. He is our greatest ever Captain, and the sentiments from his former teammates – and opponents – attest to this.

His managerial career may be pockmarked with failure, but Claudio Ranieri had a thirty year career leading some massive clubs, and only winning his first title with Leicester last season. It may have been hard for a winner such as Adams to take, but it won’t taint his entire memory.

This appointment was a chance to polish the lustre that Adams has at Arsenal. If he could have found a way to pass on his knowledge and findings in the game, he would be given the chance to further his career. This could have been the first stepping stone to another illustrious chapter in his Gunners journey.

The grass is never greener on the other side – and former players who flew the coup earlier thanks to temptation have crowed this on many occasions. Adams may have suffered the ignominy of failure at other clubs, but this chance at Arsenal is the perfect opportunity for him to show he has the chops. He will be given every resource, including that precious commodity of time, to make a success of this position – but it is also the litmus test for his managerial aspirations.

Many of his former allies in that watertight defence have gone on to punditry to distribute their anecdotes, their battle scars and their experience.

Tony Adams had another chance – just like in his playing career after recovering from a spell under Her Majesty’s Pleasure and alcoholism – to go another route away from the TV studios.

And he has instead chosen money over returning back to the nest. Adams has opted to coach in China, where currently the yen is luring more players to the Chinese League than people are luring pokemon.

And so, money wins again.

Let us hope that the next time he is afforded another opportunity to come home, that he finally does. It is the only place that he should be.

2 thoughts on “Mr Arsenal Was Home – But Not For Long”