The news surrounding Mertesacker’s injury layoff should have been met with widespread dismay.

With our primary backup being the rash Gabriel – before his injury of course – and given the supposed severity of the Big German’s injury, the fans emotional barometer should have been pointing toward the negative end of the spectrum. 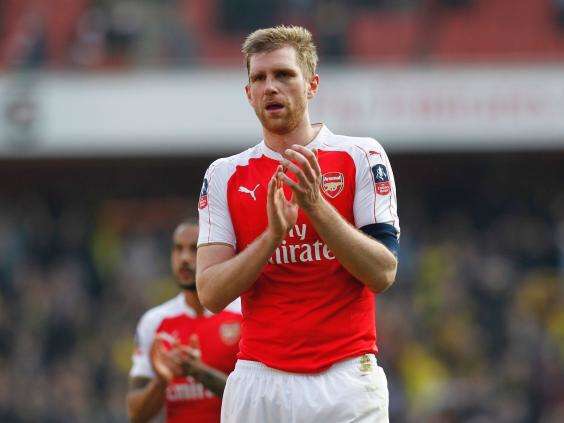 Yet again though, a large portion of our fan base provided the rest with an opportunity to smack our foreheads with weary resignation, as some celebrated the loss of Mertesacker.

His obvious lack of pace has ever placed him at the front of the queue when dishing out labels for scapegoats, but his presence in our back line was a reassurance for his partner, Koscielny, and he offered excellent positioning as well as leadership for the back line.

His layoff has already forced Wengers hand somewhat. The stubborn Frenchman had to offer reassurances to fans via the press that he would indeed scour the market for an ‘experienced’ replacement. Normally tight-lipped in regards to transfer plans, his frank admission was as much an attempt to placate the rumblings from back home, as well as a comment which goes against his grain.

From that moment, keyboards were bashed in a frenzy as links to a smorgasbord of defenders were typed out and sent out into the ether, in the hope these tasty nonsensical titbits would be hungrily snapped up by famished Gooners.

Some fans rejoiced as – in their opinion – Mertesacker is the weak link and ripe for replacement.

Then, a strange parallel occurred. Gabriel suffered an injury in the friendly win over Manchester City, and a certain portion of fans again took pleasure from one of our players being unable to play.

Of course, if we are in the market to improve what we have, then everyone should be happy. Mertesacker though, isn’t the problem.

The Big German still offers much, but if we are in the market to replace, then a step up from what we have means a big player, for big cash.

Gabriel has had so many opportunities to impress, and yet nearly every game he has appeared in, he has made an error. Mertesacker offers a far better track record, but his faux pas are a little more high profile – and thus more memorable.

Prior to playing the MLS All-Stars in the US, Arsenal trained and reportedly used Coquelin as an emergency centre back in some of the regimen.

The outcry amongst social media was instant. This move in training was obviously Wenger’s move to penny pinch a little more. Why spend when we have a ready-made replacement?

Of course, he has a track record of this. In recent seasons, we have seen Monreal and Debuchy play in the centre of defence. The move to use Coquelin in the same way though, is far removed from this.

Firstly, we didn’t have enough centre backs to complete the training methods. Usually, they use four, and we only had three, so Coquelin filled in.

Secondly, Wenger has already stated he will purchase a replacement. So this should have allayed any panic. Yet, until we have concrete proof a reputable defender is being brought in, the tidal wave of negativity will continue to wash over everything.

Everyone is desperate for our club to break the glass ceiling which has been placed over us for many a season now, and next season will be even harder.

Fans know this, and with every day we wish for our squad requirements to be addressed. We foolishly place faith in rumour, even though we know that it is more than likely a pack of lies.

We have Calum Chambers in our ranks, and he has all the tools at his disposal for a fine career, and yet if he was given a chance in place of Mertesacker, rather than a new signing, the outrage would be tangible.

What is the point of buying these youngsters if we aren’t willing to blood them?

We hope. Whilst our rivals may be spending dough, they will require integration. If we can hit the ground running, who knows?

We all need to take a step back, and a deep breath. The summer is being ruined.