To say that it was expected for Arsenal to make safe passage would be fair, as Championship leaders Hull City travelled to The Emirates and a replay was the last thing that both Managers would have wanted.

Well, that was exactly what they were rewarded with, after Hull City showed little to no aspirations in attack and Arsenal put in a disjointed display which meant that a stalemate was always on the cards.

I attended the match and part of the ritual of going to The Emirates is always the pilgrimage to Piebury Corner. A true delight for the tastebuds and packed to the rafters with Arsenal memorabilia, you simply have to make it part of your matchday routine.

After meeting some friends there, we descended upon our choice of watering hole and then we took our seats after repeated bag searches as security was stepped up.

Arsene Wenger rang the changes as expected, with nine players coming in from the team that defeated Leicester City so valiantly. His opposite number though, made ten alterations.

Fans forgot the rule however, that affects only opposing goalkeepers.

Eldin Jakupovic had an absolute stormer in between the sticks, saving eleven shots on target, which is the most that any keeper has stopped against us this season.

Chances were not at a premium as Arsenal looked to stretch a stoic and deep lying Hull backline, with Mohamed Elneny in particular, looking to play it out wide time and again. The Egyptian, whilst always looking like he played within himself, had no problem with his distribution.

In fact, there was a half-hearted penalty appeal coming from a shot from the new boy. It cannoned into Alex Bruce’s arm, and seeing as there was ten yards at least between Elneny and Bruce, it could have been given, but referee Mike Dean refused appeals – not a surprise. 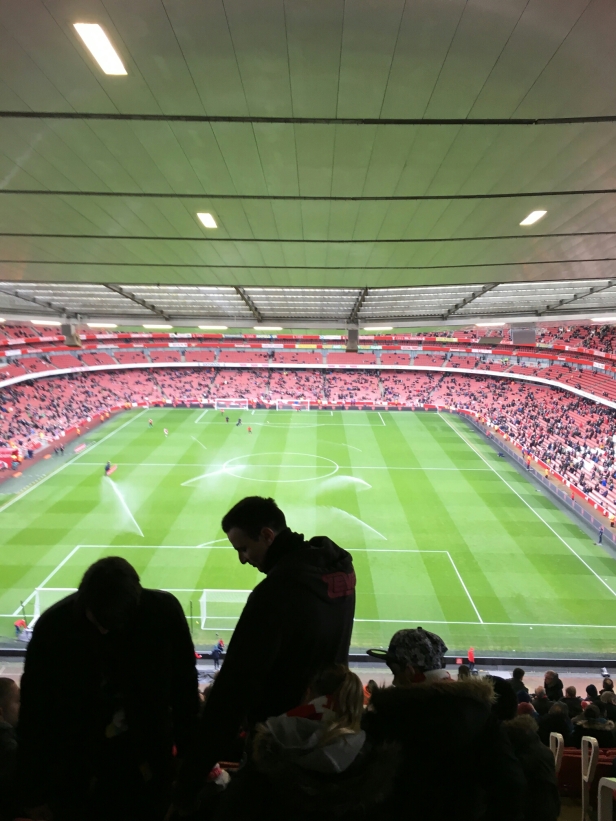 Danny Welbeck and Alex Iwobi also had chances in the first half, but Jakupovic had summoned the spirit of Lev Yashin – just as Fraser Forster had recently. Whether it was a combination of finishing that didn’t require the best of gloves, or it really was a heroic act is up for discussion, but from my seat in the stands it appeared as if he had supernatural powers.

The tests continued up to the the interval, but predictably, Jakupovic was the equal to all that was flung at him.

Half time came and went and Arsenal upped the tempo from the off. Theo Walcott – who had looked effective in the first half as he interchanged with Danny Welbeck – forced Jakupovic into an impressive save, before Joel Campbell took a free kick about twenty five yards from goal that the Hull keeper got fingertips to. Those tips of his fingers put the ball onto the post and the score was still 0-0.

This flurry of action showed that the team were capable of playing at a higher tempo. Seeing as Hull were playing with two banks of four just in front of their own box for the majority of the match and had less than thirty percent of the possession, a ball that zipped and a team that moved was a must if Arsenal were to break through.

The sixty-seventh minute saw the usual Wenger substitutes, as Olivier Giroud and Alexis Sanchez – players that really shouldn’t have had to come off the bench – took to the field. More chances and more saves, but the pace of the game slowed, and it just seemed from the stands that there was another gear that our team possessed but were unable to find. It was incredibly frustrating.

The match could have been oh so different, and Hull nearly snatched it in the end, but Ospina saved well as the final whistle blew and the dreaded replay became reality. Four games in eleven days, which include Barcelona, Manchester United and the North London derby.

If only the team could have maintained the up tempo they had in spells then who knows if the 24 shots fired at Jakupovic would have been more – but the chances were good. It was in these vibrant spots of play that we were at our most dangerous.

Theo Walcott was our main danger, and his display should give him a little more confidence. Alex Iwobi was tidy in possession with good feet with close control. Danny Welbeck flitted in and out of the game but he zipped about in earnest. The lack of intent from Hull City was alarming but they barely deserved a draw. Now, Arsene Wenger must hope these very players who couldn’t maintain the effervescent spells that stretched the game, can come in during this exhausting run of games and fill in when necessary.

We are still in with a chance of winning a third consecutive FA Cup, but with a game against Barcelona and the Premier League so tantalisingly poised – can we really afford yet another game? The replay in Hull must be a case for the same team to do what they should have done in these ninety minutes – and ensure progress to the next round. The result put a dampener on the game but the day is always better than average when you can attend Matchday.