All clubs have their heroes. Every club has had a player they recall with a twinkle in their eye and a smile. Those players that were capable of changing fate with a deft swish of their boot.

Most clubs have had one or two of these game-changers on their roster. As an Arsenal fan, we are blessed to be following a club that has boasted a plethora of these miracle men sprinkled liberally throughout its existence.

Bergkamp. Henry. Overmars. Limpar. Wright. Pires. Just some of the many who have graced our presence with their speed of thought and unerring inclination for the spectacular.

These players are rightfully tagged ‘legends’ due to their exploits on the pitch and the success they inspired. It was the flashes of genius though, that fans hold dear.

One player should have scaled these heights. A place amongst the greats was robbed from him by a man clad in a Birmingham City jersey, stealing a living pretending to be a professional football player – when in reality he was no more than a hatchet man.

If not for Martin Taylor, then this Croatian with a Samba heart would have scored his name upon more than many Gooners memories.

Eduardo Alves Da Silva joined us in 2007 after bagging 74 goals in 111 games for Dinamo Zagreb in his newly adopted home country. A little known fact is that whilst in Dinamo Zagreb’s ranks, he scored the first goal in a European competition at our newly opened Emirates Stadium. His team went on to be roundly hammered 5-1 on aggregate but it was an omen and a reminder to Arsene Wenger – who no doubt already had tabs on him – that he was the man that could offer a diff

That he did. 21 goals in 41 games overall for the Croat with the South American flair. It is lamentable that the number of  games played is so low – especially when you notice the goal scored ratio for both clubs. The number should have been far greater.

23rd February 2008. Eduardo had cemented his position in the team alongside Emanuel Adebayor and the man affectionately known as ‘Dudu’ in his native tongue had been in prolific form. Add to this his teams dizzying position at the summit of the Premier League and Dudu was proving to be a surefire hit. This date though, was to be the watershed for not only Eduardo’s hopes of forging forward with his Arsenal career, but also the Gunners title bid.

The injury was so horrific that even Sky Sports – normally like buzzards around a carcass whenever a whiff of controversy is scented – refused to show the replay. Opponents blanched at the sight of the strikers mangled leg. Teammates were utterly distraught. The game went on to finish 2-2, in no thanks to the match official’s mystifying decision to award a late penalty for a foul from Gael Clichy.

This game also saw the now notorious William Gallas sulk. Refusing to leave the pitch thanks to the dropped points and the referees performance, it took Arsene Wenger to take to the pitch to drag him off. The newly appointed captain had gone off the rails and set a bad example to the many youngsters who were in the team.

All of these events conspired to end the attempt for a first title in four years. It was the harrowing memory of Eduardo’s injury and his absence from the pitch that had the biggest impact though.

Nearly one year later to the day, Eduardo made his comeback. Everyone awaited the prognosis on whether he could return to the same levels as he had shown before his injury. The problem was though, that Wenger had his hand forced by the sheer

length of layoff that Dudu had suffered.

Whether he did or didn’t elevate himself to the heights he was at previously was a moot point. His days were numbered as first choice striker as a new formation including the ‘Human Meerkat’ – new signing Andriy Arshavin – were employed.

He left our club in 2010 for Shakhtar Donetsk. He spent four years in Ukraine before leaving in 2014 for Flamengo in Brazil, where he has seemingly found his groove – but I’ll leave the Brazilian football expertise to @Stillberto

It was goals like his volley Vs Burnley – which was scored after his injury – and his chest and volley Vs Manchester City which spark feelings of nostalgia and sorrow for missing out his full potential. We never witnessed the array of finishing this man possessed. Whilst he didn’t own the set of lockpicks that Bergkamp and Pires had that unlocked tight defences, his finishing and ability to find space in the box was on an even keel with the best we have had at the club.

Ian Wright always maintained that to get the edge on a goalkeeper, you have to do the unexpected. Take the shot when they don’t think you can, go for the implausible. Eduardo was of the same ilk. He was the perfect combination of the countries that conspired to make him the man he is today – he had the destructive finishing and mechanical efficiency of his Croatian counterparts such as Davor Suker, but he also had in his armoury the ability to adapt his body and thinking in milliseconds in order to maximise his scoring potential, a la his Brazilian brothers Romario and Ronaldo.

Before anyone raves that I’m comparing him to these titans of the game – I’m not. What I’m attempting to illustrate is that he had certain abilities that can be best described by using these players as examples. Dudu was not on the same plain as these ethereal beings. 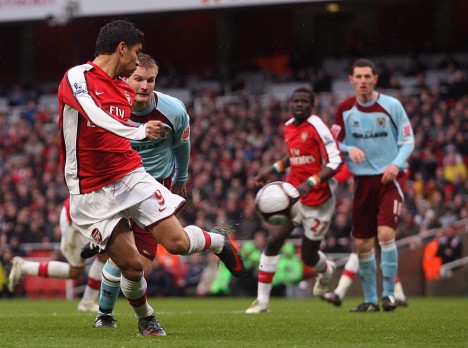 He was however, a special player who deserved a slice of recognition that was stolen from him. His nickname in British slang  is a crude word used to describe defecations to youngsters. He deserves a far better moniker and a much better Arsenal career.

One thought on “Eduardo – The Man With the Ill-Fitting Nickname”