At the start of last season, I released an article regarding Jack Wilshere and the level of performance he must show in order to cement his future at Arsenal.

Seeing as Aaron Ramsey was revelling in the deserved adulation from Gooners after a sensational season capped by scoring the drought-ending goal – Jack needed to start the season fit and in form.

Ramsey  couldn’t quite replicate the previous seasons displays and tallies and the tail end of the season saw him farmed out on the right of midfield – a fact he wasn’t exactly fanatical about.

This season, transfer rumours abound regarding a host of midfielders who are being targeted. At this current moment –

Where do Jack and Aaron fit in to Arsene’s plans?

Jack would have been aware of the massive amounts of pressure on his shoulders before the season got underway ( his extra sessions of training told a story of a man determined to show his worth ) but he dealt with the burden well – he and Alexis were the two players who were chiefly responsible for keeping a punch-drunk Arsenal team on its feet and capable of rectifying a woeful domestic start. He also took his international team by the scruff of the neck and put in a string of Man of the Match displays at the base of a midfield diamond.

Wilshere was fulfilling his end of the deal. He was showing what the years of potential could amount to. If only the rest of the team were singing from the same hymn sheet then he could have worked wonders.

Lo and behold though, his ever-haunting adversary – injury – reared its vile head and cursed our English Terrier once more. A hamstring tweak or a slight muscle tear wouldn’t have delayed his progress or hampered his form too much, but Paddy McNair of Manchester United felt a need to test the elasticity of Jack’s ankle ligaments and that would mean more than four months out of the side. 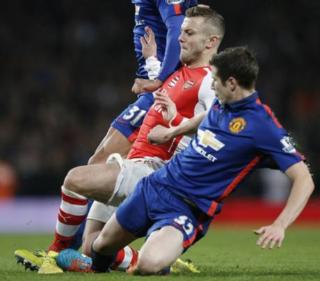 Another extended hiatus. His absence from the side coincided with a quite fantastic run of form and the discovery of a combative midfielder who resided in a spot just under our nose. Francis Coquelin was lauded and quite rightly. His tackle percentage, his passion, his overall hunger to win burned brighter than any on show in the League. He forged a central partnership with Santi Cazorla and this allowed Santi to utilise his main strength – carrying the ball forward. Santi showed that he can more than mix it when the tackles get tasty and his exquisite touch allowed him to get the better of the majority who shadowed him.

The duo were to remain until the end of the season. Who could argue with that after the results that repeatedly were achieved?

Jack is again injured, but he was putting in some fantastic displays for England and with his goal Vs West Brom and his brace for England Vs Slovenia – was showing he has added another arrow to his quiver. Even when he manages to maintain his fitness though, will he get into the side?

Aaron Ramsey couldn’t complain of injury hampering his season, but pressure to perform was also a factor for our Welsh Dragon. After being Player of the Season the previous domestic year, fans expected his goalscoring exploits and all-round action style to be a mainstay in his game. He did not manage to duplicate his haul of goals and assists, but was just as vital as he was previously, albeit in a different way.  He gave himself to the team cause and ran himself into the ground.

Something that was evident in his game was an effort to pull off the repertoire he evidenced the season before. A penchant for backheels and flicks were in full force and although they are a great spectacle and a staple part of Arsenal play – it was occasionally to the detriment of a goal threat.

The most telling indicator is the fact that Ramsey ended the season on the right hand side of the midfield. With Sanchez occupying the left and cutting in, Coquelin and Santi patrolling the centre and Ozil employing his vision in the number ten slot – Aaron did well to get into the side but not in his preferred position.

So, as I type, both players are no doubt keen to remind Wenger of what they are capable of. Also, both players have been the subject of transfer causerie – with Jack being courted by City in their homegrown player chase, and Aaron reportedly causing Barcelona to flair their nostrils and take a whiff.

I cannot envision either player leaving this team, especially not at this moment. This squad is on the verge of something extremely special and they both will be aware that they have a part to play. What part though?

I am of the opinion that they can both play in the centre together – as a duo. I’ve heard some liken their situation to Lampard and Gerrard – both great players but they are unable to form a cohesive unit. Piffle. The reason Lampard and Gerrard couldn’t play together is that it was for the international team. Intermittent games, sparse chance to form a bond in rare training sessions and restricted tactics thanks to blinkered Managers. Jose Mourinho desperately wanted Steven Gerrard to play alongside Frank Lampard. He would have found a way.

Jack and Aaron are completely different. One is better running with the ball, the other makes smarter off-the-ball running. Both have a tendency to roam upfield and arguably, that is where they do their best work. No one could say that they are rookies when it comes to the defensive side of things though. Both have the skills needed to soak up pressure and then spring an attack. What is important is that they work on a pivot.

This will not happen this season. Coquelin showed he is worthy of a starting berth and Santi Cazorla ( now that he has extended his contract ) is more than capable of copying his form from 2014/15 and pasting it into the coming season. If this is the case, then that leaves the right wing position again ( Aaron will be ecstatic ) and sporadic appearances replacing Santi or Coquelin. We cannot account for injuries and on the face of things, it is a fantastic position for the club to be in. It shows true depth but the two players in question will want more than what can be given. They want to play every game and in the centre.

So that leaves Arsene Wenger in a tricky position. Does he risk dropping points whilst the two adapt to a pivot system and wait for the inevitable gains the team will receive through playing two of the best central midfielders together? Or does he continue from where last season left off?

What a decision. The Emirates Cup and the Charity Shield were clues. Until then we enjoy the fact the season has once more returned and bask in the knowledge that we have Ramsey and Wilshere in our ranks and they aren’t even guaranteed a start! What a leap from five or six years ago…… 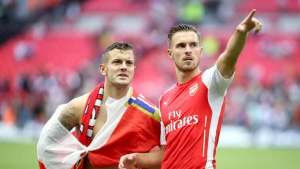