The acquisition of Danny Welbeck brought with it a heady mix of emotions.With expectation running high following a spending splurge pre-season and our first choice striker Giroud crocked – Gooners expected a flagship signing to fill an Olivier shaped hole in our team. Many names were bandied around, with Edinson Cavani the most ludicrous. The late signing of Welbeck was a fillip but didn’t have a brass band nor a ticker-tape parade.

The much maligned Danny Welbeck was further derided by a portion of Arsenal fans as he was perceived to be below the class that is expected for Arsenal. Spending what little time on the pitch he had on the wing, Welbeck was offered a chance to rescue a promising career that threatened to be dwarved by a lack of appearances.

His rejuvenation under the tutelage of Arsene Wenger was the soliloquy that silenced most critics. His exploits for England and his goals as Arsenal’s first choice No.9 exhibited that the boy could finish if given the chance and a run in the team. So much of what a player does is down to confidence. If afforded the luxury of simultaneous appearances in their favoured position, then the aforementioned player will usually fully utilise their talent and seek to repay the faith shown in him. Welbeck didn’t score in his first two games – prompting Wenger to sate fans by reminding them that they need to show patience. An assist and goal Vs Aston Villa in a 3-0 win was exactly what Danny needed and less than two weeks later he bagged a brilliant hat-trick Vs a lacklustre Galatasaray. 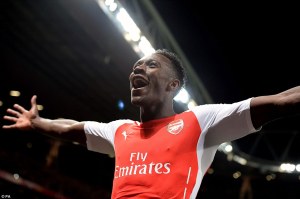 Since that incredible high, Giroud has returned and set about plundering goals at an alarming rate. Welbeck has had to play second fiddle to our No12 and instead, exhibit his most known trait – his work-rate. We have seen with every appearance he has made, Danny covering every blade of grass on whatever flank he is placed on. Indeed, he has also swapped wings and aided attacks with verve. He hasn’t looked out of place amongst our glittering array of attacking jewels and has performed the more thankless tasks with as much enthusiasm as he chases a through ball.

Welbeck fitted the bill. He was exactly what we needed. He was the 2-for-1 offer on loaves of bread. He has more than gamely offered able competition to Giroud which in turn has upped the Frenchman’s productivity and he has provided the answer in the wide areas when injuries have bitten. When everyone is fit though, will he play?

Of course he won’t. He provides squad depth. With players physical abilities now akin to fine-tuning an F1 engine, injuries are now an unwelcome part of the game rather than something you can avoid. Welbeck and his adaptability will garner a fair amount of appearances in his understudy role. He will not string appearances together and boost his form. Appearances and time on the pitch are the only answers in regards to questions surrounding form. Seeing as Welbeck is the footballing equivalent of a band-aid, he will never be fully able to show what he can do as he did in his first few months whilst Giroud was out of the squad.

Also, he cannot be happy fulfilling this role. He vocalised his preference for the No9 position during his fruitful run in his first few months with us and said one of the reasons he joined was chances at Utd would’ve been scarce. Seeing as Giroud and Alexis are ahead of Danny in the pursuit of the No9 jersey and on the left and right we have a veritable smorgasbord of options due to the adaptability of our style and the players themselves – sitting on the bench may be the forecast for the future.

I personally don’t see Welbeck staying at Arsenal for an extended stay. I couldn’t put a number of seasons on how long his stay will last but if a team of the likes of Everton or Southampton enquired regarding his availability then surely Welbeck will be tempted? He could do a fantastic job at either of those teams. Hell, if Liverpool sniffed around then he would be a great partner for Sturridge, if the Mancunian could swallow his allegiances.  He could be first choice striker at most teams in the Premiership. He has all the attributes.

When he signed with us, no doubt he thought this was the move that would elevate his career and give him the perfect platform to succeed domestically and internationally. Thanks to Giroud raising his efforts this hasn’t proved the case. He will get appearances with Arsenal and will not let anyone down but to properly showcase his talents then he needs a stage that is open every matchday rather than just a matinee show.

I would be pleased if Welbeck stayed, but for the wrong reason. It wouldn’t be his goal threat that would please me, it would be his work-rate and stamina. Ask yourself the same question and the same conclusion will be reached. He has shown he can be a top-flight striker and he has shown the desire that is needed to continue to plough a lonely furrow up front. He is entirely blameless but I think Welbeck deserves a chance to shine and bathe in the adulation that is reserved for a striker who scores goals. With Giroud looking the perfect fit for our style, Alexis more than able to fulfill striker responsibilities and Chuba Akpom looking every inch a capable prodigy – Welbeck is dispensable. If he stays? Then we profit from a hard-working and able player. If he leaves for greener pastures? We thank him for his brilliant efforts and watch him take the opportunity we couldn’t give him.