How do you rate an entire decade’s worth of football?

Is it simply the silverware that adorns your shelves that judgment should adhere to?

Or do memorable victories, skilful feats on the pitch that stubbornly cling to your brain, or heroic near-misses also deserve to affect the needle that point toward success?

The first overriding thought is transition and the weakening grip of Wenger.

Arsene led the club through some difficult times, but his last years’ were saved by the FA Cup wins that were our sole success during the decade. Poor purchases, an obstinacy when it came to tactics and taking into account our opposition and his own failings led to Arsenal eventually falling out of the habitual top four spot we had grown accustomed to.

That led to Unai Emery, Freddie Ljungberg and our current malaise.

It hasn’t all been a slow slide into mediocrity though.

Can we look back on the players that pulled on the jersey during these years and decide who best represented us during this time?

So, who makes Up The Arsenal’s Team of the Decade?

First up is our goalkeeper.

The winner of the gloves is Szczesny. 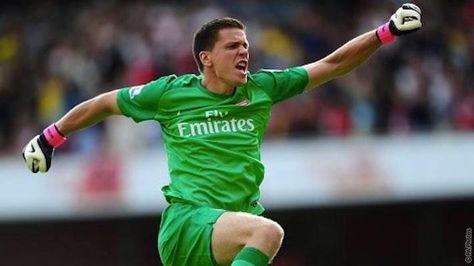 The Pole played more games during that time than the majority above, and made less high-profile errors. Does his celebrations during one of our NLD wins count toward this decision? You bet.

Of course, his antics off the field were silly at times and lacked professionalism, but Szczesny came through the ranks and was proud to wear the shirt. His talent was beyond question, and the now Juventus Number One is showing what we all knew we had on board, including Wenger.

Still, Leno is looking rather tidy at the moment, it is just his short length of time at the club that is holding him back. Cech was solid but unspectacular and both Ospina and Fabianski were both stuck with high-profile errors that led to a weakening in the structural integrity of the confidence in them.

So Szczesny takes the gloves.

What about right-back? We’ve certainly had a few:

The winner? Sagna, and by quite some distance.

The reason why this list isn’t longer is because of Sagna. Signed in 2007, the Frenchman was the epitome of reliable and had the novelty value of actually being able to both attack AND defend. He was named in the PFA team of the season in 2010-11 and his consistency was the reason why we never really bought a right-back.

Bellerin has been wonderful for us, but is still maturing. We got the best years from Sagna and if his final ball was just a little better, he would have gone down as one of our Premier League greats. Still he very much deserves a mention. His last season saw him lift his one trophy with us, the FA Cup – and it was a fitting reward for his faithful service.

Now comes the centre-backs. This should be a laugh:

They both played more than any other during the decade, they also formed a formidable partnership, with their winning ratio far and above the best since Toure and Campbell.

They both had their own personal highlights – Mertesackier’s swansong in the 2017 FA Cup will always be known as the ‘BFG Final’ and Koscielny becoming our talismanic defender will always be remembered – but together they formed the last strong defence we have seen.

True, Per had the turning circle speed of a glacier and Koscielny was impetuous at the best of times, but their strengths combined to create a wall that always gave us more security.

Well, far more than we currently have…

Next, and lastly for this chapter, is left-backs. Who do we have to choose from?

The winner? La Cabra himself.

Monreal truly endeared himself to the Gooner faithful with his high level of display, week in and week out. He filled in at centre-back on many occasions, showing his defensive nous, and Spanish caps well into his 30’s were indicative of his pedigree.

Stamina, expert timing on his many raids down the left flank, Monreal makes us wish that he was five years younger. Now at Real Sociedad, but we have much to thank him for.

An honourable mention to Gibbs too. The youngster pushed through the ranks, was part of the side that won our first cup in nine years with the 2014 FA Cup, and was the dedicated professional, even when on the bench for prolonged periods.

Next up is our midfield, but that will be for next week’s blog.

Disagree with my choices? Let me know why!

Keep them peeled for next week!