Goals are the currency of football.

Never mind the abhorrent amount of money that flows through the veins of the game, it is goals that keep the heart pumping, the turnstiles rotating and the clubs breathing.

When the ball hits the back of the net, for scorer and fan alike there is no greater feeling. They make the difference between glory and failure, ignominy and memories made. They encapsulate entire era’s, they symbolise icons and halcyon times.

They are also entirely subjective.

Just look at any Goal of the Month poll. Whether it be long-range screamer, thumping header or intricate team move, there are advocates for all. There are always football hipsters who will vocalise the attributes involved in a 6 yard finish, and the purists will always vouch for a twisting, turning solo goal, seeing opposition defenders sprawled on the turf with twisted blood.

Goals are enjoyed by all, but ask anyone what their favourite goal is and no matter their allegiance, they will always give a different answer.

It can be a long range, top-corner botherer, it could be a 20 pass manoeuvre that exhibits the finest one-touch passing before a slick finish bewilders the goalkeeper. More often than not though, it will be the occasion that elevates a goal from crowd pleaser to unique moment forever captured by all minds.

Look at Michael Thomas and his last minute heroics at Anfield in 1989. His run was astute, yep, but there was a bobble and a touch of luck before he put the ball over the lunging grasp of Bruce Grobbelaar.

Pure it wasn’t, but you ask Gooners what their favourite goal was, and a large swathe of us will plump for it.

Thierry Henry’s effort against Liverpool in 2004. Champions League and FA Cup exits had left us raw, and we were on the rack against an inferior Liverpool team. Step forward Thierry Henry, at the time probably the greatest player in the world.

He picked up the ball about thirty five yards out and began to lead a merry dance, so fleet of foot and rapid that two, three, four Liverpool players attempted and ultimately failed to grab possession or even to stop Henry in his tracks.

Jamie Carragher left in a broken heap on the turf. The roar of the crowd as belief seeped in once again. The goal this time was beautiful, but much more than that, it was when we stayed on track during our greatest test in the Invincibles season.

The point here, is that as long as the net is rippled, we will greedily lap up all and sundry in terms of style of goal. We always appreciate a stylish effort, and if it grades high in technical skill then we will fondly remember it.

But should we progress to the Europa League final and one of our players knocks in the ball with his left butt-cheek? It will be held in the highest regard.

Aaron Ramsey’s winner Vs Hull City in the 2014 FA Cup Final. Andy Linighan, 1993. Charlie Nicholas, 1987, Eddie Kelly, 1971. Some goals were far more aesthetically pleasing than others, but each share a parallel – they won us something. They etched our name on silverware – and for that, they are also etched into our minds in indelible ink. 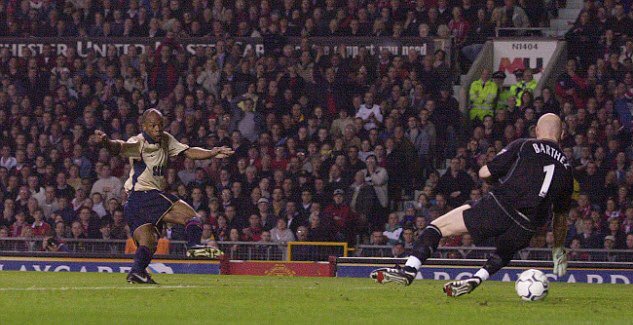 My personal favourite? Sylvain Wiltord’s effort against United at Old Trafford, 2002. His finish was snaffling up a loose ball after Ljungberg’s effort was saved. But it was everything else that makes it unforgettable. The stadium, the opposition, the fact that we had gone ahead and then won in a ground that gave precious few points away – the fact that it won us the title on enemy ground.

Not the prettiest, but it was pretty effective!

What about you – what’s your favourite goal?