You know those nights out that you have been planning for weeks? For once, the whole gang have been corralled into being free for this one night. Everyone will be there, we all know the score, and we’re heading to a very exclusive venue.

It’s going to be one of those events we will all remember, it will live long in the memory.

The trouble is, the weight of expectation crushes it – as well as your pal Terry who was well and truly trolleyed at least three hours before you even reached the club

You’ve built this up sky-high, and it means that your expectations will never match up to the actual night – leaving you with an overwhelming sense of disappointment.

These bright young things burst into our field of vision with a searing white heat, emblazoning their name upon your retina and your memory. Your first glimpses of these starlets set the bar high, and you know that they have the potential to be even better.

These teenagers are nowhere near their peak years, and yet they’re already mindblowingly good. They take the ball and they confront defenders, impudently asking them questions that season upon season of cynical fouling and defensive coaching hasn’t quite destroyed yet.

It is a breath of fresh air, and thanks to the wonders of social media, their name and their display soon spreads, like a Russian plot behind a Trump campaign. Soon, they appropriate a phrase, one that is often the nadir of any hopes they – and you  – once had of seeing these prospects fully realising their talents.

They become ‘The Next Big Thing.’

At Arsenal, we’ve had this many times over the years in the Wenger era. The Frenchman had a penchant for finding a diamond in the rough in the hope that a bit of spit and elbow grease can coax out every bit of promise.

Sometimes it worked. Cesc Fabregas was a surefire hit. Nicolas Anelka was a real find. Jack Wilshere and Alex Iwobi were tracked all the way through the youth systems. Aaron Ramsey was a first-teamer early on, but he has come on leaps and bounds from the fresh-faced teenager that turned down Manchester United to come to London Colney.

There are others too though, that fell by the wayside. Quite a few actually.

For every Anelka, we had a Daniel Crowley. For every Cesc, we had a Jeremie Aliadiere or a Yaya Sanogo.

It shows that talent isn’t everything that comprises a top-flight success. The amount of careers that started at a major club and the majority of their professional lives were spent in lower leagues is evidence enough to show how tough it is to make that next step from starlet to bona fide first teamer.

It is why expectations should be scaled back a little. 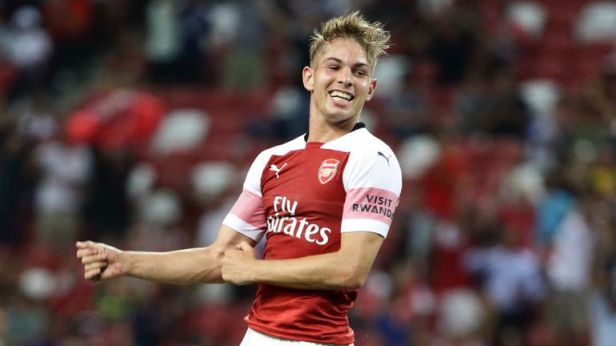 It is why Emile Smith-Rowe should be cherished, but avoid the heavy burden of our heavy breathing as we salivate over what could be.

Jeff Reine-Adelaide was in the exact same position only a couple of seasons ago. The Emirates Cup was buzzing as fans were able to catch a glimpse of the player given the moniker, ‘The Jeff.’

Big things were expected, and the rare sightings we had of him and the comments from coaches and teammates were indicating that he was the real deal.

Yet, on the day Emile Smith-Rowe made his first big splash upon our senses, the very same day Jeff Reine-Adelaide had signed a permanent deal for Ligue Un minnows Angers.

Apparently, it was a mix of money demands and first team requests that drove Jeff to move from the club, but either way, it is another player who has failed to reach the heights we know they can reach, at our club.

Emile Smith-Rowe has been making waves for the youth teams since last season, big enough for the discerning Gooner to be aware of his presence. But it was his inclusion in the Singapore squad and his subsequent fantastic solo effort against Atletico Madrid that showed we may have a real gem in our ranks.

It seems that he has the world at his feet, but we’ve been burned before. We should hold back on placing so much emphasis on the development of Smith-Rowe, as Crowley, Reine-Adelaide and others have shown that talent isn’t everything.

If Smith-Rowe shows the same level of intensity and dedication that recent youth converts Ainsley Maitland-Niles and Eddie Nketiah have shown – then Smith-Rowe could well be too dazzling for words.

The thing is though, is it is very uncertain right now. We have no idea what will happen.

All we can do is trust the framework at the club to treat the kid with kid gloves, and his rare forays in cup games are enough to avoid stunting his growth but also enough to let him shine.

We could place far too much weight on the kid, and most likely we will do.

But Smith-Rowe is that good.

Slow and steady everyone.

5 thoughts on “Smith-Rowe and Kid Gloves”