As a youngster breaking through into a Premier League first team squad, the odds are stacked.

Reiss Nelson is amongst a few Gunners kids who’ve made the transition from successful Under-23 prodigy to useful squad member for the first team – but now Nelson has a decision to make, with his current contract entering its final throes. 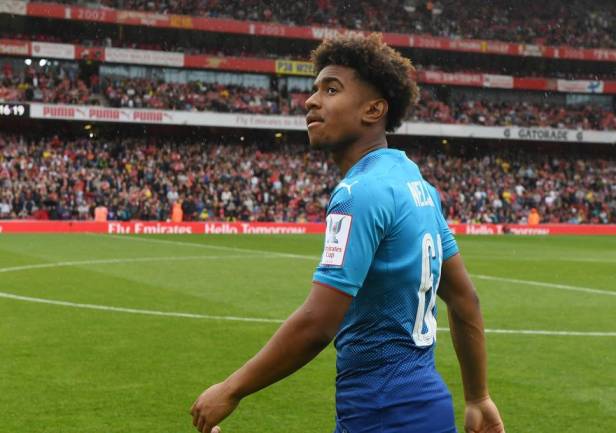 And it’s one that will decide how his career pans out – the skeletal remains of previous blossoming talents serve as the most potent reminders.

Reiss Nelson has seen plenty of action in the Europa League so far, and has made his bow in the Premier League and domestic cup competitions this season. His exciting displays and swashbuckling style have drawn admiration from fans, who mostly believe him to have a glittering future ahead of him.

Will it be in an Arsenal shirt though?

If he continues his current trajectory, then he will become an increasingly relevant player in our side. It’s a big if, but on what we’ve seen, he definitely has a place in first team plans in years to come.

With youth comes impatience however, and there are some glaring pieces of evidence that the grass may well be greener elsewhere – in the form of Marcus McGuane and Chris Willock.

McGuane became the first Englishman to play for Barcelona’s first team in recent years, with his substitute appearance in the Catalan’s Supercopa de Catalunya final. McGuane actually made his first team debut for Arsenal ironically as a sub for Reiss Nelson in our 4-2 win over BATE Borisov, but McGuane was drawn to the potential of a big move, and is doing well for Barca’s B side.

Then there is Chris Willock, brother of our midfielder Jo. The gifted winger opted for Benfica rather than bide his time at Arsenal. His first season in Portugal has been strictly for Benfica’s B side, and options to move back to England on loan were turned down.

Could the lure of early stardom bring about an end to Nelson’s tenure at Arsenal?

So many kids have come and gone through the revolving door at our club, but not many have had the talent that Reiss does. His star is a rising one, but a move to a club that stunts his development with a lack of playing time would shrink hsi potential, setting a well-worn path that many youngsters tread – that of a journeyman swilling around the lower reaches of professional football.

Nelson also needs to have assurances from our club that his first team chances are as healthy as ever, and he will get windows of opportunity. He also needs to play more than he did this season.

So, Nelson is at a crossroads. He can look at Ainslie Maitland-Niles, Alex Iwobi and Jack Wilshere to see what could happen for his career, should he continue to knuckle down and concentrate on his football.

Or he could opt for sunnier climes, but with a far steeper incline for success. The light at the end of the tunnel may well be brighter, but in the dark it’s hard to tell whether the tunnel is longer or not.

Reiss Nelson has a decision to make.

What would you do?

One thought on “Reiss Nelson Has A Decision To Make”