Squad depth has not just been an issue for clubs in the last decade, although there is much more need for it now thanks to some crazy scheduling. The Premier League era has placed demands on teams with European competition and domestic cups meaning that managers have a heavier reliance on those who would primarily be warming the bench.

It is these players that seasons hinge on. They are the last-gasp rolls of the dice that Gaffers are forced to do when backed into a corner. Sometimes it is a late substitution to soak up pressure and defend a precious narrow lead. Other occasions mean a start in a big game, replacing a stalwart in the side and hoping the proverbial bandage holds up.

In the briliant 1997/98 season, the influx of French players had started to meld perfectly with the English core, and the Double was achieved. The names of Vieira, Petit, Overmars, Bergkamp, Adams, Dixon and Seaman were among the brightest lights, but the name of curly-haired Gaul Gilles Grimandi is not one of the first that comes to the forefront of memory.

Primarily a defender, but used in midfield and full-back, Grimandi made 33 appearances in League and Cup, Filling in whenever plays succumbed to injury or – in the case of our more hotheaded players – more often suspension, Grimandi was an oft-utilised asset.

On first appearance, Gilles was a limited player who struggled to keep up with the pace of the Premiership. That would be fair to a degree, as speed was never one of the Frenchman’s chief attributes. What he lacked in rapidity however, he more than made up in elbow grease and aggression. Sometimes, the lid to his temper would not be screwed down tightly enough – Diego Simeone’s face can attest to this – but there was never a moment on the pitch when Grimandi did not stretch every sinew, give every inch of effort he had. 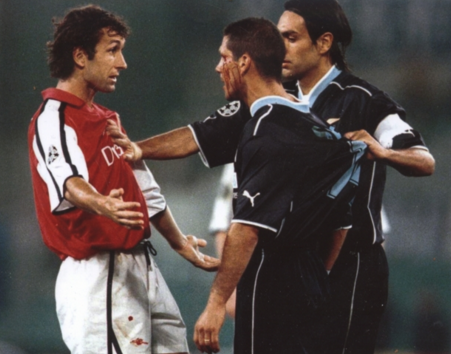 Us fans love a player who gives his all. You may be in the shade of some of your more illustrious and gifted teammates, but if you show us how much you want to win, we will invariably back you. It helps he also got sent off against our neighbours too….

In his time at Arsenal, he won two Double’s. He may never have held down a regular spot, and he only scored a meagre amount of goals, but without the sweat and thunder that Grimandi brought to the table, two of our most glittering of campaign’s could have been far different.

The player known for his curly locks was a good egg off the field – in direct contrast to his angry persona in an Arsenal shirt – and he helped new signings acclimatise themselves to London and the club. Now a scout with the club, Gilles can look back on his Arsenal career with pride.

Gilles got us out of some perilous situations. He rescued us on more than one occasion – scoring the winner in a 1-0 win over Crystal Palace springs to mind – but it was more his tackling and will to win that made him the lifeguard of our squad.