Football as a form of entertainment is being watered down in this modern generation.

In its purest form, we revel in the artistry that unfolds in front of us. We throw ourselves into the tribalism of it all, our fires stoked by the accelerant of competition. We all place men who wear the same colours as we do on a well-polished plinth, with every heralded touch and decisive goal they are raised yet higher to the heavens.

Yet, the sport is now caught in a maelstrom of sporting pestilence, supping away at the vitality of the game. Every game brings with it a noxious cloud of contentious decisions and professionals involved in dubious gamesmanship. Every form of media is emblazoned with reminders of the greed and corruption that takes place across the footballing globe.

Then there is the ridiculous sums of money that course through the veins of the sport. Obscene wads of currency bandied around for everything from players to corporate logos plastered on every visible surface.

It is enough to make you lament the state of what we once adored. The core of the game, the very reason we still tune in and pump our time and money into football is still present, but it is covered in a thick film which is difficult to remove from our fingers, never mind forget.

There are moments though, which are seared in our memory. They are the underpinnings of our passion, they are what forged our permanent fascination.

The inspiring story of Bradley Lowery is one of these – and we owe him a huge debt of gratitude. 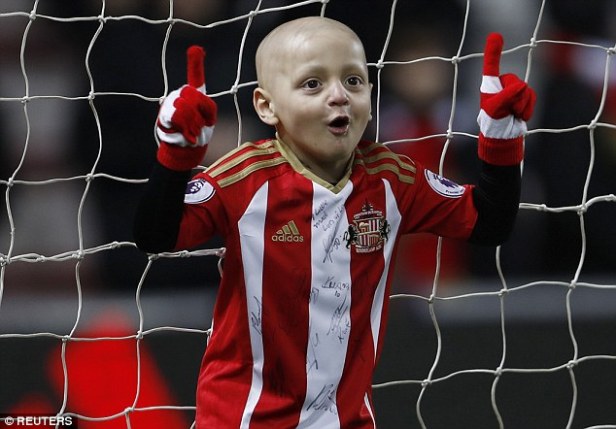 The tragically short life of this heroic little boy should not be remembered for the battles that he waged head on with neuroblastoma, not that they should be belittled. Every procedure, every day he suffered, he was face to face with an enemy that would have any of us on our knees. Bradley was an absolute warrior and his bravery was there for all to see.

It was his absolute joy at every minute of football that he watched. Camera’s may or may not have tastelessly fixated upon Bradley when he was in the stands or in an Executive Box, but his eyes told a different story to the signs of battle he beared.

They were illuminated by football, by his heroes.

He typified that wonder which we have all forgotten. The players from our past which all reside in a special nook in our memories, our own heroes. Bradley looked to the Sunderland players and despite their woes on the pitch – they were all he wanted, all he wanted to be. For this slice of time, there was no pain. He was with his heroes.

When Bradley was mascot for Sunderland, for England. When he led out the teams, his beaming face was the reminder we all needed that while there may be ills debilitating football, there may be times we forget why we are infatuated with twenty two men chasing a ball on grass, Bradley’s spirit is exactly what we need to summon, if that superhuman feat is possible for the rest of us.

We all fell in love with Bradley, all our tribes united under just one banner – the admiration and respect for a six year old who just wanted to watch his beloved Sunderland. This coming together of fans is testament to Bradley.

This little man has served as a wake up call – his strength in the face of such overwhelming adversity was a big dose of reality, and a huge inspiration.

But it was his love for the game, evident even to his last days, that serves as perhaps the most potent of smelling salts to us all. We can summon him in our mind’s eye when we are beleaguered by the detractors of pure football, and we can also do the same for any trouble which plants itself in our path.

Bradley Lowery was the biggest fan, and the strongest person I have known.

Thank you Bradley, you are my hero.

One thought on “Thank You Bradley Lowery”