Club loyalty in football is a commodity rarer than a politician’s promise coming good.

When a player genuinely loves the club he plays for, it shines through in the interviews he gives, the gestures you see on the pitch. It is unmistakable. It isn’t the flagrant badge kissing you see from all and sundry, even though they joined in January and are french-kissing the crest in February.

These players that have the club in their hearts are held dear by fans. Their shortcomings are put to the side in most cases and we hope and pray that they end up becoming the legend they’ve dreamed of becoming.

Jack Wilshere falls into this bracket. The bow-legged midfielder burst into our vision in 2008. Yup, it was that long ago. The talent, the touch, the vision. Wilshere at his tender age was showing age was no barrier for supreme skill, and the bar was set so high that 99% of players would struggle to see it, never mind reach it.

It is a recurring tradition that England must sieze upon a promising youngster and heap unnecessary pressure onto their shoulders, and so it proved with Wilshere. This time though, it was warranted. It appeared that there was nothing he couldn’t do.

This burning flame of talent attracted injuries like curry to an alcoholic. Since his debut in 2008, Jack has played a full season just twice. Injuries have not only played havoc, they have left his hopes of reaching his peak perilously dangling.

Something had to give, and the unthinkable happened this season when Jack realised his injuries had left his playing chances hindered at Arsenal. He knew it was time to prove he could last an entire campaign, so a spell playing for another club was the answer he reached. 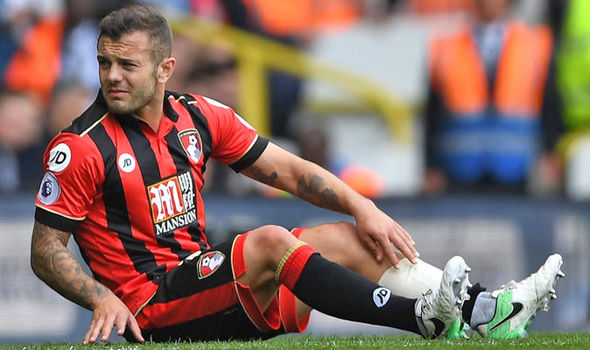 His loan deal with Bournemouth was meant to herald in the second coming of Jack Wilshere. He would be placed on a pedestal amongst his new lesser-talented teammates, as they looked to him for divine inspiration on the pitch. He would shock and amaze once more, like a stumpy David Copperfield.

Instead, he has been overshadowed by those that technically should not be able to hold a flame to him. Jack has been left out of the side sporadically – and some may claim that it was the kid gloves he was being handled with that saw him out of the team on occasion – but mostly it was tactical. Cherries boss Eddie Howe has seen fit to demote Jack from the Boy who would be King, to understudy to Harry Arter.

What in fresh hell has happened? Jack should be lauded by everyone by now?

He has flattered to deceive at Bournemouth. He has showed flashes of his potential, but his numbers do not lie. He has barely contributed to their totals, and even if he simply lacked the finishing touches, his dearth of MOTM awards is evidence of a player not making his presence felt.

Then, his bad luck rears its ugly head again, and the news of his hairline fracture is the ending of his season.

Is it the end of his Arsenal career too?

Jack has one year left on his current deal. He has not reached the heights we know he is capable of, and he seems utterly incapable of stringing more than four games together in a row before his pins buckle. Arsene Wenger has iterated his worries for Jack’s career, and the sole hope he has is that his fracture is due to heal in time so he can take part in pre-season.

He must ensure that the special measures both Arsenal and Bournemouth have gone to in order to increase his fitness are enough. What more can be done to keep Jack fit enough?

If Arsene retains his midfield playing staff, Jack has a real fight on his hands to prove his worth.

Not that any of them are as talented as he is. But it seems that this time, talent doesn’t matter if he can’t show it. Jack is on his last chance, and if he can’t stay fit – and above all else show he is not just potential unmanifested – then the Gunners legend he and we want him to be will just be a pipedream.

2 thoughts on “It’s Time To Hit The Road Jack”