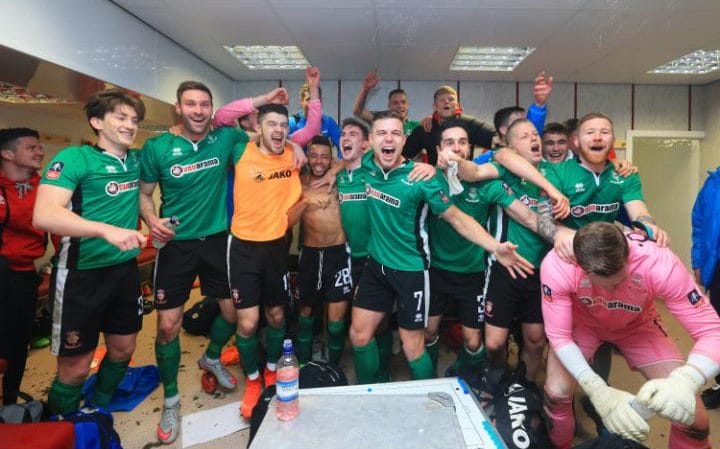 For the first time since 1904, a non-league club has upturned all expectations and reached the Quarter-Finals of the FA Cup.

Lincoln City are the team which have destroyed the odds to stand on the precipice of a visit to Wembley, with a semi-final spot up for grabs when they took on Arsenal. The match had the media frothing, as visits to the modest home of the Imps served to highlight the contrast in stature between the two clubs – just as they had done after the Imps had beaten Burnley.

It wasn’t only Sincil Bank and its stripped back appeal which had so enamoured the press. It was the possibility, even the remotest, that this ragtag bunch of chancers could create history and make the bookies cry once more. The match at The Emirates did not allow the media to have the moment they so craved as Arsenal showed their superiority, but the match captured the imagination at least.

You see, everyone loves an underdog. In sport though – and especially football – the underestimated who succeed are immediately and for eternity encased in footballing amber. These lesser-spotted instances of insurmountable odds being cast aside are used as references and reminders that magic still exists. As fans, we are constantly inflicted with slideshows of when David overcame Goliath.

Wrexham defeating Arsenal in 1992. Sutton dumping Coventry out of the Cup. Even heroic near-misses constantly utilised, cut and edited to fit into yet another footballing montage. A prime example would be when Stevenage Borough came agonisingly close to embarrassing Newcastle United.

The bigger the opponent who stands in the way of this fairytale being complete, the grander the plot. When Arsenal recently visited Galders Green Lane to take on Sutton United, the spotlight which shone on the occasion was bigger than a Premier League match. If the home team had done the unthinkable and snatched a result against the Gunners, there would have been several cases of spontaneous human combustion in the press room.

Sadly for the majority of neutral fans, it wasn’t to be. Arsenal won comfortably without truly kicking into gear. They had picked a strong side for the fixture and ample respect was shown. The artificial pitch was a great leveller for the hosts, but there was just enough in the Gunners’ first gear to canter over the line.

For an upset to occur, the settings have to be just right. A home draw is usually a mandatory requirement, and the shabbier the dressing room for the visiting primadonnas, the better. Then, you need a sprinkle of the Premier League manager underestimating their opponent. Mix in with a liberal dash of a weakened team and you have the perfect storm for which to concoct a devilish result.

Above all else, there will always be a smidgin of an opportunity when eleven men take on eleven men. A wicked bounce of the ball, a swirling wind, a few players who just aren’t at the races. Any small variable can help the underdog battle for the most unlikely of results.

The difference between a round progressed in the FA Cup can make all the difference to these clubs who ply their trade in non-league. With Sutton and Lincoln getting so far and the media attention that has been on them, the clubs coffers can afford to be loosened a little. Surviving just below the top four divisions is no picnic, so one hundred thousand pounds here or there is enough to ensure a club can plan for the future.

An epic run to the third round and a plum draw against a mighty enemy is what every player, manager and Chairman in the non-leagues dream of. Every season the chance arises, and with so many rounds in place before this stage, the chances of reaching this threshold and then drawing a desired team are nearly as long as defeating a Premiership team.

The oft-referenced  ‘magic’ of the Cup is revived each time a minnow manages to swim far enough upstream and then finds itself in the company of the big boys. Without these ties, then the divide between the have’s and the have-not’s would fracture the game as we know it.

The FA Cup holds football together. We often lose sight of this as the heat and relentless nature of the Premier League and Europe blinker us all. The FA Cup needs to thrive in order for the majority of clubs outside the top-flight to survive.