On television, an awards ceremony is glossy. It is a conveyor belt of celebrity and headlines. The awards themselves are designed to highlight some exceptional work by a chosen professional in their field., and when the trophies are presented, we get to hear a snippet about the winner’s story on how they got to sit at the summit.

Football awards are no different, especially now the professionals are as close to megastars as the thespians who walked the red carpet at the Oscars recently. The big names need no introduction, but the awards ceremonies are there to do exactly that. They are the glitzy fanfare for deserving individuals that have excelled in their chosen sectors.

And for the biggest awards, we can hear that fanfare from any given place in the world.

I was kindly offered to attend the London Football Awards on the 2nd of March, at Battersea Evolution. I was to be an official member of the press and gain some soundbites from the attending football glitterati so the charity at the root of the LFA’s – the Willow Foundation – could gain some valuable testimony on the wonderful work they do.

It meant that I was to be given license to speak to some of my heroes. It was an offer I could not refuse.

As I entered the arena, there were a huge number of dedicated Willow volunteers working their magic in the final preparations for the event. I was given my press pass – I was unashamedly proud when I saw my name on it – and I was directed to the press enclosure where the pro’s would walk past on their way to their tables for the night.

I spoke first to Bob Wilson – Arsenal’s Double-winning keeper and all-round gentleman – and the man who started the Willow Foundation spoke warmly about the growing stature of the awards and how their prominence is on the rise.

Footballers past and present were coming and going and it was a lot to take in. The majority of the players time was spent ahead of us in front of the plethora of camera’s lying in their path, but I was quite content to bask in the light of these stars. I’ve always wanted to be a member of the press and this was the legitimate experience.

A man who I have spoken to on a number of occasions stopped to talk about the LFA’s, and Alan Smith was as warm and forthcoming as ever. He praised the idea of celebrating the clubs and players from the capital and the often unheralded work Willow do for those who need the aid most. 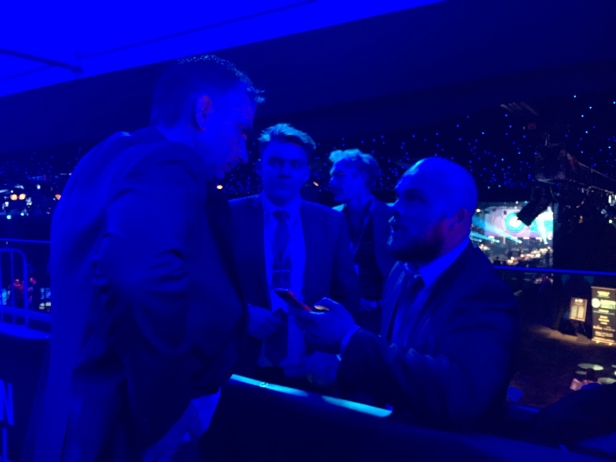 Perry Groves, Lee Dixon, David Seaman and Ian Wright. These were just a few ex-Gunners who attended the event, and David Seaman was quite gracious indeed with his time. His wife and Willow Ambassador Frankie Seaman stopped to talk and she told me that he always has time to give answers to the press, or anyone who asks him, such is his kind nature. Our former goalkeeper was with us for quite some time, and commented on everything from Arsene Wenger’s future to the rotation of Petr Cech and David Ospina.

For the record, Safe Hands will not speak out against Wenger as he declared the Frenchman the ‘best coach I’ve ever had.’ Also, he thinks the rotation of our goalkeepers is needless. To hear this straight from the source, undiluted, was a real treat.

Gary Mabbutt, Tony Cottee, Gary Lineker, John Motson, Tom Cairney, Eni Aluko, N’Golo Kante and Antonio Conte were just a taste of the names who were at the night. There were far more, but with only an hour to grab as many comments as possible, it is inevitable that some get through the net.

These awards are a real fillip for London’s teams, especially as all aspects of the game are considered in the awards categories.

Here are the Awards and the Winners from this special night:

Premier League Player of the Year:

London Manager of the Year:

London Young Player of the Year;

London Goalkeeper of the Year;

EFL Player of the Year;

London Women’s Player of the Year:

London Community Project of the Year:

Fulham’s Feltham Young Offenders Institute Scheme.
The London Football Awards were a real success and next year will be even bigger. Let’s hope that Arsenal manage to bag a few next year!

2 thoughts on “At The London Football Awards ”