Sometimes, you can make the right calls, all the correct decisions – but it doesn’t matter.

This game saw Chelsea throw down the challenge to the rest of the so-called challengers – to try and stop them marching on to another title. They toyed with the Gunners and at times it was painful to watch.

Arsenal’s weak title challenge was ended once Martin Atkinson blew his whistle for full-time – but it had flattered to deceive the whole time. Arsenal have not applied any real pressure on the top of the league, and they have not shown form that is worthy of the label ‘contenders.’

It is incredibly painful for me to write this, but the stark contrast between the teams was there for all to see – and the difference will be in May when Chelsea will be holding the Premiership title.

Arsenal opted to leave Olivier Giroud on the bench and go for Theo Walcott and Alexis sharing striking duties. It was the correct decision as Giroud would have gotten short shrift from Chelsea’s defence. 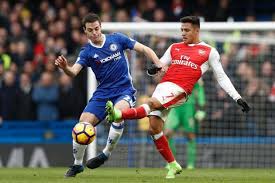 To maximise this offensive change and cause Chelsea damage, we needed runs though.

We started well, and the faded, disjointed first halves that have been a staple for this season did not appear. We pressed the home side and Alex Iwobi very nearly gave Arsenal the lead inside five minutes, shooting just wide after he and his cohorts squeezed the Chelsea defence.

Chelsea soon got to grips with Arsenal, and our pressing became diluted. This lack of covering saw Chelsea grab the lead.

A cross from Pedro saw Diego Costa rise highest and his header smacked against the crossbar with Cech beaten. The ball spun off the bar into the air, waiting for someone to claim it. Marcos Alonso did so and headed into the empty net, via knocking Hector Bellerin to the ground with his elbow.

Some say it was a foul, some don’t. The facts are he led with his elbow and it WAS a foul.

Regardless, Chelsea went into the break a goal up, and the old script of previous encounters with Chelsea seemed to be in place again.

Eden Hazard went on a slalom run, and his marker Oxlade-Chamberlain let him. What it needed was a cynical challenge to stop the Belgian, but it didn’t come. Instead he was allowed to continue, and after bamboozling Koscielny, he slotted into the corner.

Chelsea were looking imperious. Arsenal had put in plenty of effort, but a shifting attention to pressing and poor covering of runs meant that their opponents in blue always had the edge.

Then, insult was added to grievous injury. Cesc Fabregas had only been on the field for a minute, but he capitalised on a ridculously poor Petr Cech clearance to lob into the net over the stranded keeper.

Giroud was a sub in the second half and he grabbed a consolation late on from a Monreal cross, but the truth is – this match had been over from the first minute.

Here are five things that really need to change on the pitch, from this moment onwards;

We started so well, but with each passing minute, our grips on Chelsea’s midfield weakened. By the end, they had the freedom of the pitch. If we are to press, then we need to do so as a team. We also need to keep up the effort.

Switching off is not condoned

Some of our players looked visibly sapped by the end of the game. Some of them looked that way DURING the game. This was not only a derby, but it was the game which would either let us dream or destroy our bid for another season. There is no room for passengers.  This was not good enough at all.

The Ox and Gabriel are surplus

Gabriel, time and again, has shown that he is not Arsenal standard. He does not track, he is rash, and he leaks goals. The Ox has had ample time to grow. He has shown promising glimpses of what he can do, which  has lengthened his Arsenal career. He is inconsistent though, and has been from the start. Some will argue that he has not had enough games, but he has made over 115 appearances in the Premier League alone since he joined in 2011. He was markedly out of his depth in this game and he cannot be depended on.

Petr Cech needs to step up

It may be form, but this season has been Cech’s worst in the Premier League. He has looked rigid, unable to flex for saves – and his normally unshakeable hold on his box has looked anything but steady. His mistake for Chelsea’s third was something I can’t recall seeing from Cech. His own high standards will tell him that he is letting his club – and himself – down in a big way.

Where is the edge?

Eden Hazard, when scoring his goal, could have been brought down by Coquelin and a couple of other players. He could have been halted. He wasn’t and look what happened. Alexis did the same thing for us, and Nemanja Matic went into the book for stopping his progress. There is the difference. Chelsea are professional. They play great football when it calls for it, but when the game is dirty and it needs a firm hand, then they do that too. We looked like a promoted side in the face of Chelsea’s approach. We need to toughen up – but not in the way that Granit Xhaka has attempted to do.

I’m going to wrap this up, as I really am not enjoying this.

Bayern Munich in the Champions League means our Euro hopes are up against it. Chelsea have destroyed us in the Premier League. If we play like we have in our last two games, then Sutton will be ending our FA Cup dreams.

I need a drink.