It would appear that the Good Ship Arsenal has hit a form-storm again.

November always brings the blues for the Gunners, but after two consecutive away defeats, losing ground in the league, grabbing a quite frankly ridiculous draw against Bournemouth – and now escaping from Preston with cup progression – it would seem the respite in December was a false dawn.

Make no mistake, just as Bournemouth should have seen out a win in our last league game, Championship side Preston North End should have put this 3rd round cup tie to bed before half time.

Callum Robinson put the home side ahead in just the seventh minute, after yet another sluggish start from the Gunners. Slack defending saw the vibrant Robinson slot home, and from there, it was pretty much one way traffic as the Deepdale crowd roared their side on.

Callum Robinson could have had a hat-trick and Ben Pearson, Hugill and McGeady all had opportunities to cause a huge cupset. A combination of poor finishing, David Ospina and the offside flag saved Arsenals blushes, and aside from a solitary chance, Arsene Wenger’s side were limping like a lame dog to the half time break.

The second half was remarkable in its contrast. It was as if Arsenal finally realised their superior quality and began to play like they should. Within seconds, they had drawn level, as Aaron Ramsey fired home from the edge of the area. From nowhere they were level.

Arsenal were well on top for the second forty five, and Preston – from ripping Arsenal open at will – did not register a single shot on target for the entire half. the away side did not want a replay, and they fought to grab the winner.

Was anyone surprised that it was Olivier Giroud that grabbed it? In the dying embers of the game, Lucas Perez had the composure and presence of mind to backheel to Giroud, who fired in via a deflection and put Arsenal into the 4th round.

There was much more that occurred in the game, but here are the key points from this tense fixture:

Step forward Olivier. He certainly has a habit for it. Sunderland, United, Palace, Bournemouth, West Brom and now Preston are just recent examples of times Olivier Giroud has rescued us with his goals. He was pretty ineffective along with the majority of the team in the first half, but his record speaks for itself. If there are any doubters about his effectiveness, then they are ignoring cold hard fact. The stand-in captain for this game was our saviour yet again.

If there was a bright spot in the first half, it was Lucas. His every touch was sensible, and correct. He uses the ball well, and is always on the front foot. His assist for Giroud’s winner was beautiful, and he now has six goals and five assists this season, despite featuring in fleeting glimpses. Lucas is the real deal, just imagine what he can do with a run in the side?

Welbeck is back, and he will be huge for Arsenal

His fitness has been severely hampered since joining, but when he has enjoyed a run in the side, he has offered so much. Either from the flank or centrally, Welbeck’s workrate, intelligent running and awareness will be welcome now he has returned, after he came from the bench in the 83rd minute after missing out since April.

In the last match review, and I think many others, I have mentioned that our continual tendency to come out of the blocks with all the urgency of a constipated snail is a huge hindrance, and this match proved it yet again. Why oh why is it occurring? We know how we can destroy opponents in a whirlwind of passing and movement, but why do we only do it on about three or four occasions a season? It is perhaps the most frustrating element about our play. a remedy, or an answer would be great.

Maitland-Niles has a future at Arsenal

There is a reason that Ainslie Maitland-Niles has been used more than any youth team player this season. His versatility helps, but he has shown he can deal with the pressure of stepping up. He was severely tested by Preston in the first half, and he could have done better on a few occasions, but he kept his cool and was always willing to take possession. Promising signs from the youngster.

There was a lot more to write about, but the most important thing is that we have kept up our record in the FA Cup of not losing in the 3rd Round since 1996. It was close, but we scraped through. 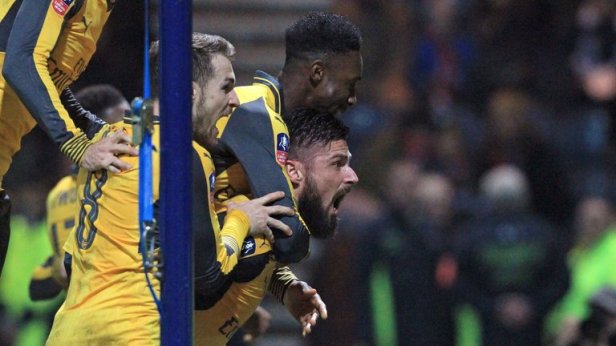 With our league position, the cup may just be our best bet for success this season. It’s a good thing we got through then!