On the eve of a titanic tussle between two teams, the usual fare from the respective managers is to talk about team selection, and to talk up their opponents. This shows that they take the threat seriously, that their own team is more than ready to match whatever is thrown at them.

The press conferences pre-match are a chance to peer behind the veil of secrecy that shrouds these clubs that are now businesses. The managers offer delectable nuggets of information surrounding preperation, and each syllable offers the opportunity to surmise and interpret life at the training ground. It is fascinating, but at times it offers up a stalemate between the prying press and the defensive chief in front of the cameras.

Jose Mourinho though, doesn’t do convention. Tradition is bucked wildly whenever a topic of passion is tossed toward him. One of these subjects he cannot ignore and gnaws on chronically is Arsene Wenger. This weekend was no different.

Instead of talking about the merits of his team and how they are aiming far higher than where they currently reside, the Portuguese boss opted to aim a bony fingered prod into the chest of his French rival – and in turn, he answered his own query.

Courtesy of The Independent newspaper, when Mourinho was asked about Arsene, in an attempt to stoke the old flames of adversity which have burned now for over ten years, Mourinho said of him and the titles they both had won:


I have three, I think. Mr Wenger has three or four – I don’t know. Does that mean we should be respected even in periods where our results are not the best? I think Mr Wenger has that respect from all of you. I don’t think I have especially because my last Premier League title was 18 months ago. It was not 18 years ago.

Again, this comment offered a fascinating glimpse at the inner workings – but of Mourinho’s thinking, rather than the inner sanctum of a club.

It is common knowledge that the two old foes cannot abide each other. They both are the antithesis of each other. Much like a classic comic story thread, the two are opposites. Mourinho complained of a lack of respect, and that he should be offered the same as his counterpart, but would Wenger ever lower his guard enough to aim an attack like this?

Wenger has had his fair share of run-ins, with Ferguson, Jol, Pardew, Allardyce and a few more, but whilst his actions on the sidelines have often raised eyebrows and exhibited a well-concealed temper, the Frenchman hasn’t often peeled away the veneer which reflects the majority of journalists barbed arrows.

When Wenger has a press conference, the onus is on the representatives from each media organisation to wriggle past the defensive mines that Wenger has placed, and attempt to manouevre him into a cul-de-sac where he cannot rely on his usual armour of dry wit and deflection.

It is like a duel. With each question and succinct answer, it is an unheard swish of a fencers foil. A delicate flick of the wrist, and the journalist’s laden question – instead of burying itself deep in the targets psyche and craw – finds itself somehow lying futile on the floor.

After over twenty years, Wenger has perfected the art of combining a soundbite that sates the writers, and also never truly revealing his modus operandi. Why give information away when it could prove vital?

Mourinho on the other hand, grasps each question from the baying masses with abandon. He is a journalist’s dream as he cares little for what they write – or does he?

He weaves and concocts, and when it works, it adds to the high turrets and walls of the seige mentality that is the foundation for most of his successes. He takes the heat from his players, and acts as a shield. It is martyrdom at its finest, but it isn’t pretty.

The main difference is when they are both under duress. Wenger’s composure is a still lake, and when ripples occur, he manages to keep them under the surface. Mourinho creates a foaming, thrashing lake that garners headlines and exposure.

In his post-match press conference, after Arsenal secured a barely-deserved point thanks to a late header from Olivier Giroud, the contrast between both managers was palpable.

Whilst Wenger admitted his team were lacking – even inferring they may just suffer from a mental block playing at Old Trafford – Mourinho’s offerings were laughable.

His words were not veiled, he aimed straight for Wenger. He did not bolster his sides confidence, he just went all out, swinging wildly for his opposing manager, his nemesis.

Mourinho claimed that Wenger had FINALLY beaten him, after twelve attempts in the Premiership.

It was a dig to show that Mourinho still had the upper hand, and still had his precious record of never losing to his enemy.

It speaks volumes though, that despite Wenger never defeating Mourinho in the Premier League (seven draws and five losses after this weekend), the playing field in terms of public opinion is even – or even tipping in the balance of Wenger.

In truth, shouldn’t success earn respect? Yes, but it isn’t just silverware that constitutes this most precious commodity. Wenger’s longevity may be in part due to the aims of the board, but his adaptability and where he has brought the club has given him a begrudging respect from the press. Mourinho though, is blinkered to the constant undermining that Wenger has had to deal with.

Arsenal are not beloved by the press. The team that constructs such beauty, but is intertwined with frustration, is constantly held up as a failure due to their lack of first silverware, and now a title. They are the posterboy for underachievement, even though standing next to them in the same Premier League outfit is Liverpool and tottenham – teams who have won less despite spending the same, and occasionally more.

Wenger’s defensive stance is down to years of exposure to the armament of the press. Mourinho’s constant attacking stance is now down to his struggling.

Jose has never truly had to deal with scrutiny, as he has always had a constant stream of tangible success to back himself. Now that he has skulked away from Chelsea, and now helms a struggling United side, he is exposed. What happens when we no longer have shelter, and we have to face a threat? We revert back to our basic hardwiring, what is intrinsically built into us. Fight or flight.

Mourinho is in uncharted territory, and he is showing us is hand. He is not talking of the strengths of his team, he is whinging. His comments smack of a selfish streak. He is thinking of himself, not of his team. What does it matter if you are not afforded a certain level of respect, when your team is underperforming? 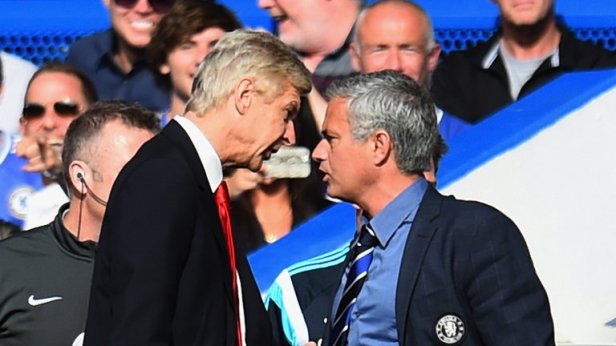 It simply isn’t true that he is not respected either. What is happening and that he is failing to recognise is that he is under the spotlight after his struggles at Chelsea, and now at United. The glowing halo has slipped, and now he must sweat under the glaring light like every other manager has done – including Wenger.

The difference is, Wenger has applied sunscreen. He’s done this before. Wenger bears the tan from the rays, but he is now accustomed to the heat. Mourinho is the equivalent of the pasty ginger kid who really should be anywhere but on a sunbed.