Two days prior to this fixture, Arsenal ran out easy victors to the tune of an eight goal victory, over an outplayed Viking Stavanger side.

Despite the handsome level of win, most eyes were on this match as the true barometer in regards of where we stand for the Premier League opener versus Liverpool on the 14th of this month.

Well, on the face of this win, we seem to have found our stride.

Friendly matches are difficult to gauge, but if this match had ended in a loss, make no mistake, panic would have washed over our fanbase like a high tide. So, with a win, we should allow ourselves a little optimism.

This was still a Pep Guardiola-led team, and it still had an embarassment of riches within its ranks. David Silva, Raheem Sterling, Nolito and the quite excellent Sergio Aguero were at the tip of City’s spear, but their bench screamed money, with De Bruyne, Navas and Yaya Toure waiting in the wings.

Our own team weren’t exactly paupers though. We had the much heralded Granit Xhaka starting in the centre, along with Francis Coquelin, and more intriguingly, the returning Alexis Sanchez started up top. Another player to return to our squad after their summer heroics was Aaron Ramsey, who played in the No10 role.

The Ox was given another opportunity on the right of the attack, and in defence, we had Gabriel and Rob Holding. Our lineup looked a little more finalised, with more established starters within the framework, so this game was primed to give spectators a taste of the coming season.

Could we keep pace with City? Would it become evident that we were severely lacking in numbers? Here is five things that we can take from the ninety minutes that unfolded on the pitch:

Our gameplan is nearing completion

There were signs of it in the preceding friendly matches, but the neat interchanges, the rapid passages of play and the transition from defence to attack were prevalent in our game, especially in the second half. We gave City so many problems, and even when we were penned in, we always looked able to convert pressure into opportunity. It may have been tagged a friendly game, but there was plenty of will to win from both sides – and no love lost. Fernando perhaps should have been sent off, after a shirt pull and swearing at the ref in two separate incidents. So, both teams wanted to win. The performance we put in though, showed we could carve them open if we wished. Very pleasing, and we appear to be ready for the 14th of August and the visit of Liverpool.

It was great to see Rambo return with eagerness to our side, but a gargantuan effort at the Euro’s for his country, and a minimal break have left the Welshman with a bit of catching up to do in terms of sharpness. He isn’t far away, and he will have a huge part to play when he does hit his stride. Ditto for Santi and Xhaka, who both have shown they will be certain starters, once they gain their edge.

Theo Walcott has his part to play

Written off repeatedly, and consigned to the exit by the majority, but Theo has faced this before, and silenced the haters. Low confidence, changing positions and injuries have all taken their toll, and he had to start from the ground up to get back to any semblance of form. He still isn’t there yet, but his forty five minute showing against a fellow Premier League contender will have his few fans purring. His goal was absolutely brilliant too. Turning away from his marker, a burst of pace, a give and go, continuing his run into the box and dinking the ball over an onrushing Hart. It was so quick, and so lethal. I will put my neck on the line – as I have done in the last few entries – and will say that if he can stay fit, and get a run of games, Theo will leave his mark. He harried defenders, assisted Alex Iwobi’s goal, and was a menace. He needs to attain consistency, but he is nearing full throttle. After such a long time, he needs to. 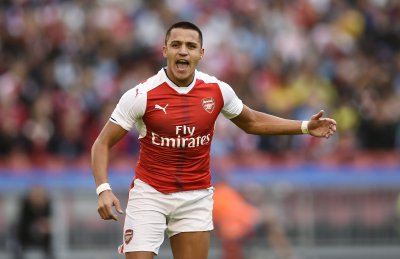 Sanchez to have a huge season

No one can say what injuries will befall us during a hard slog of a campaign, but if Sanchez manages to avoid the lunges, studs-up challenges, and desperate attempts to stifle him through the dark arts of football – he will have a stormer for us. This was his first match for us since returning from a victorious Copa tournament, and he tormented the whole of the City backline. We are more than accustomed to his non-stop manner, but this was allied with a keen edge which always opened up options. It is enough to whet the appetite for the coming season. He is champing at the bit.

Elneny and Coquelin are back to speed

Both players were immense in this game. Both hounded the opposition, but both were so hungry for possession. Their reactions at times seemed half a second quicker than everyone else on the pitch, and they are surely winning the race to start in the middle of the pitch against Liverpool for our first game of the season. Wenger may start with Xhaka, but Elneny and Coquelin are proving that in central midfield, every game will be a selection headache for their manager.

The game ended on a sour note, after Gabriel suffered what looked to be a serious injury. Crumpled on the deck for at least ten minutes, and leaving the ground in a protective boot does not lend itself toward optimism for his prognosis – leaving Chambers, Holding and Bielik as our only fit centre-backs.. Of course, Wenger must buy a defender, as cover is pretty thin on the ground, but Monreal filled in well when asked to play in the centre, and he could do again. Last resorts it may be, but an experienced head next to one of these young charges may just be the remedy. 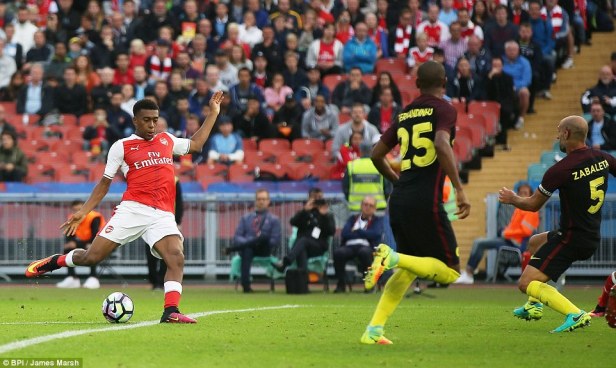 The Ox looked pumped for this game before being replaced, and Alex Iwobi again proved why it is just as important to blood youngsters as it is to buy in the window. The young Nigerian was fantastic, showing all aspects of attack in his game, but most importantly, composure on the ball. He has taken his chance with both hands, and we have a real player on our hands – who has an unbelievable capacity for improvement.

It wouldn’t be a pre-season fixture without a Chuba Akpom goal, and his amazing record will only serve to push him closer to either a first team squad place, or a more attractive loan destination. Other reasons to be cheerful were that Chambers in the second half looked assured, and Petr Cech pulled off a wonderful save, but ultimately, the team performance was the real headline. We looked good, and posed many problems, as well as quelled many attacks. If we can keep the belief up, and reproduce such a conducive display in the weekend, we will do just fine.

So, we appear to be ready. Roll on the 14th of August.