It could be said that Aaron Ramsey during Euro 2016 has been one of the stars of the whole tournament.

After the Quarter-Finals were completed, our very own Welsh dynamo sat atop the assist stats and nigh-on single-handedly destroyed the best squad in the competition with his whirlwind performance in Wales’s 3-1 triumph over Belgium.

Now, the calls are for Arsenal to include Ramsey alongside new signing Granit Xhaka in the Gunners midfield.

Which would be a huge mistake.

Last season, and the season prior, saw Ramsey tried in central midfield with a variety of partners, and no partnership stuck. Cohesion plays a big part in team selection, and Aaron was never able to strike up a rapport with a succession of midfielders.

Was this down to his partner, or Ramsey? Regardless of the answer, our Welshman was farmed out to the right hand side, or the bench, and Santi Cazorla was chosen in his stead.

Was he pushed out though? Or did Wenger recognise that Ramsey’s assets are of an attacking nature, rather than of a more balanced way of things.

Let me show you why.

Ramsey’s best season was in 2013/14. A haul of 16 goals in 34 games, as well as an impressive number of assists, saw him awarded Arsenal’s player of the season, and it was completely deserved.

But it was his attacking threat that saw him grab the limelight, not his defensive instincts. He linked up so effectively with Olivier Giroud and his eye for goal was unsurpassed.

Since then, he has had to deal with injury, poor form and constant switching partners in midfield, as well as sky-high expectations.

Now, we see Aaron absolutely dazzling Euro 2016, and elevating himself to legendary status for Wales with displays that their opponents have no answer for. Wales Manager Chris Coleman has seemingly 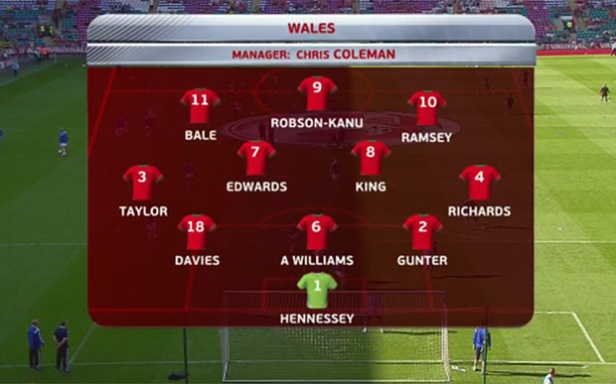 harnessed Ramsey’s talents and the

results are there for all to see.

Coleman has placed Ramsey on the right side of attack in a 3-4-3, and given him free rein to wreak merry havoc – which he has done gleefully. Coleman has taken the findings that Wenger discovered by initially placing him on the right for Arsenal. Ramsey does not stick to the flank though, nor does he stay central. Much like most creative midfielders in today’s game, he floats in the attacking third, looking to make the most damage wherever the ball may find him.

The telling evidence in Ramsey’s transformation into attacking marvel though, comes when Wales are under the cosh.

In EVERY game Wales have played, when they find themselves under pressure, and their backs are to the wall, Gareth Bale loiters ominously just short of the halfway line, and the rest of the team manfully attempt to regain possession and offload it to their national hero.

The only other man who offers an escape is Aaron Ramsey, who also waits by the halfway line, and his rapport with Bale has reaped extraordinary rewards thus far. Coleman has sacrificed a man in defence to allow his side a sharper edge when attacking on the counter.

Ramsey has occasionally mucked in, but predominantly, he has been the second attacker for Wales. The defensive element to his game was always his downfall when in central midfield, and Coleman has allowed him to circumnavigate any guilt in not tracking back, by instructing him to stay forward.

Ramsey is freed from his shackles, and the Euro stage has seen a return to form for Ramsey.

Ramsey cannot be the answer to the question; ‘ who should partner Granit Xhaka?’

He can be the answer to our right hand side though.

He has all the tools necessary – he links up well with Giroud, he has exemplary vision, and he has an eye for goal which gives a triple edge to our goal threat with Sanchez on the left.

Ramsey may not be central midfield material, but for Wales he is a world class attacker – and there is no reason why he can’t be that guy for Arsenal.

Ozil, Sanchez and Ramsey. All we need now is a striker…….

One thought on “Welsh Dragon Is A Different Creature”