Mohamed Elneny joined in the midst of last season, with a distinct lack of fanfare.

Fast forward to the end of the season, and he had converted the doubts about his ability with some assured displays and can take pride for his firm hand on the tiller during a rather shaky period for the team.

Yet he now faces an uncertain future, thanks to the glitzy purchase of midfield dynamo Granit Xhaka. 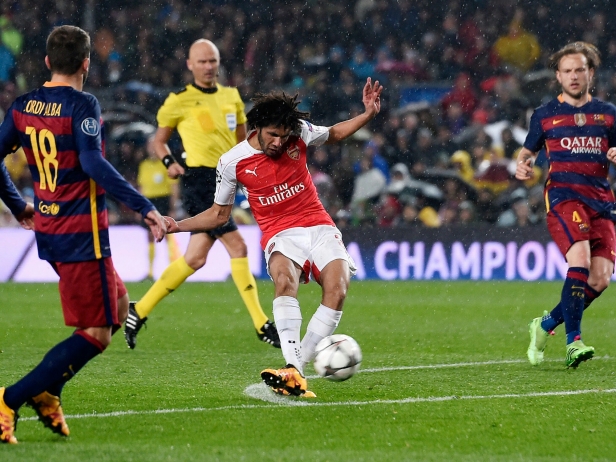 Will the Egyptian force his way into Wenger’s reckoning? There are a lot of variables to consider when attempting to peer into the near future for Arsenal’s midfield – but chief among them will be the formation that is implemented next season.

If Arsenal continue with their current 4-5-1 formation, then Xhaka – who will surely be the one guaranteed starter amongst the midfield – will need a partner in crime. Xhaka will be used as the proverbial rocks in which opposition attacks will crash into, but such is the Swiss star’s talent, he can effectively distribute the ball, unlike the defensively astute Francis Coquelin.

So, a dynamic box-to-box player would slot in seamlessly next to Xhaka. That would suit Elneny perfectly, as he exhibited all the tools necessary to be the guy who acts as a pendulum for wherever Arsenal require.

The fly in the ointment for Elneny though, is that it would also fit like a glove for Santi Cazorla, Aaron Ramsey and Jack Wilshere.

The three players above represent competition for the Egyptian, but due to the plethora of options in this position, will he even get enough games to retain any modicum of sharpness?

When their seasons are compared, it makes mixed reading – and there are no conclusive answers to be found. Elneny has the higher pass percentage, yet Aaron Ramsey leads the way in blocks and interceptions, with Santi Cazorla proving far more proficient in take-ons.

With our injury history being common knowledge, it is reassuring to see our squad so well covered in this area. There will be times when an important player is crocked, and to have players of the quality above ready to step in will be huge for us throughout a gruelling season – but what player will be happy with a cameo season?

With the departures of Mikel Arteta, Mathieu Flamini and Tomas Rosicky, reinforcements were needed, but how does a manager nullify the negativity caused by getting splinters from the bench? Wenger will have his work cut out to ensure a harmonious atmosphere in the squad.

This is also the best scenario for Elneny. If wenger changes his philosophy on the pitch and tinkers with the formation, then there could be even scarcer opportunities for him to shine.

He could not have done any more to hold down a position for the coming season, however he finds himself in a battle royale with some exceptional players. Santi Cazorla and Aaron Ramsey will be bullish about their chances of starting, but the boy bought from Basel can count himself extremely unfortunate if he fails to make the team.

Pre-season will be more important than ever this season. Wenger needs to find a concoction in midfield which benefits the strengths of his men, and every player will be under no illusions as to how difficult it will be to earn a start.

The other variables in the equation; the fitness of the players, their participation in Euro2016 etc, will all play an intrinsic part in whether Elneny goes on to forge a strong alliance with Xhaka, or whether he finds himself part of specualtion in January regarding a move away from the club to gain minutes on the pitch.

Six months on from his signing, Elneny has been entirely faultless and has shown exactly why Wenger signed him, but the Egyptian could easily find himself looking for the exit, if rapport is built between his rivals.

Every friendly played will carry resonance, and once Euro2016 finishes, all eyes will be on these matches. Elneny needs to hit the ground running to stand a chance of becoming an Arsenal regular.