We had plenty of time to adjust to it.

Any occasion in which events go against the grain, it is difficult to acclimatise to the new settings.

We had the whole of the second half of this season to wrap our heads around the fact that our neighbours – who for so long squirmed under our boot – had finally wriggled free of our supremacy and were going to reverse tradition.

The majority of Gooners, including myself, had taken our neighbours’ great displays coupled with our own faltering performances, as a clear signal that the worst was going to happen. We had enough preparatory time to batten down the hatches, mentally toughen ourselves for the inevitable verbal battering from rival fans, and to finally see the unseeable.

Tottenham were going to finish above us – and given their mentality, they would declare supremacy over us. 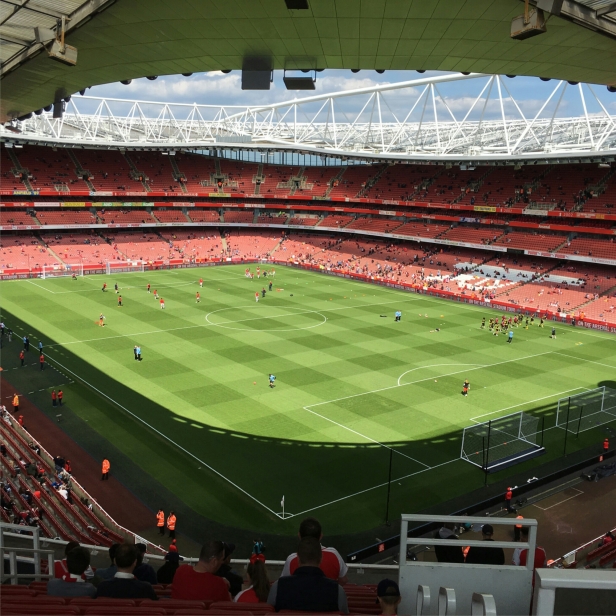 I was lucky enough to be able to attend the match yesterday. I sat in the Clock End and the issue of finishing above the shadow-dwellers was a mere side-note. The general consensus seemed to be that the three players who were bidding farewell to our club deserved our attention.

After all, it seemed like a foregone conclusion that tottenham would beat already relegated Newcastle. The team that were ‘genuine’ title contenders would surely put their inferior opponents to the sword…..

With Welbeck ruled out long term and Walcott mysteriously ‘ill’, it meant our go-to guy was once more Olivier Giroud. Luckily enough, he already boasted a great scoring record against Villa, and it didn’t take long for the coiffured Frenchman to improve that record.

Santi Cazorla and Jack Wilshere started – their first starts since November and last season respectively – and the midfield had a dynamic look to it early doors, despite leaving out the impressive Elneny.

Five minutes in, a cute backheel on the left from Sanchez left Monreal space to cross and his delivery found Giroud, who headed past Bunn in the Villa goal.

Instead of pressing home the distinct advantage in scoreline and talent, it was Villa who threatened next, Ayew making Gabriel look a fool, but his cross was cut out by Koscielny.

Arsenal were looking pedestrian, a problem which has blighted our season. A lack of ideas results in sideways passes and our team becoming static. We lack movement and it was giving Villa ideas that were quite frankly, above their station.

Villa never quite made the breakthrough though, and half time came quickly. 1-0 up, and the interval brought out one of the finest exponents of the beautiful game in recent years – a certain Bobbi Pires – to talk of the upcoming Legends Match in September. 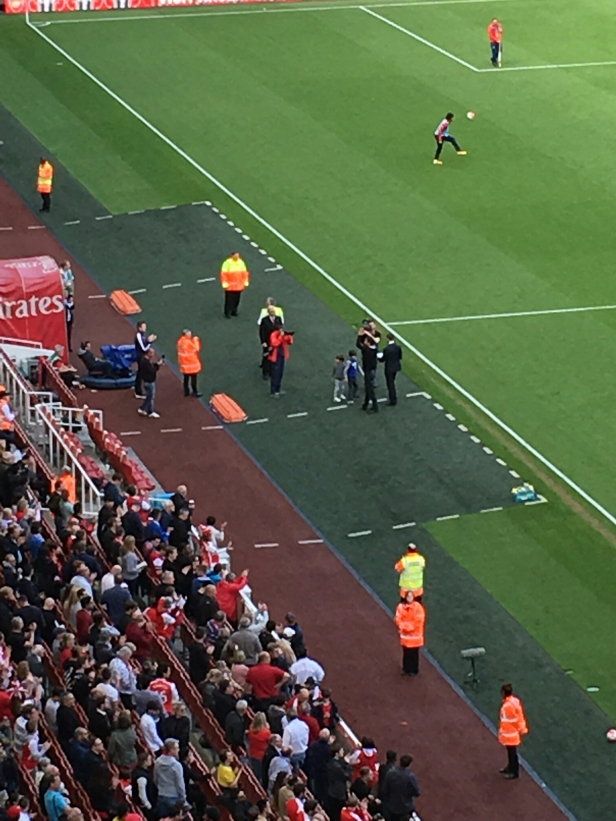 The whole day had a certain jovial atmosphere to it, but during the half time interval, everyone had heard the 2-0 scoreline at St James Park – and we started to believe.

The second half began as the first half ended – with a distinct lack of urgency. Ozil had threaded a few passes through but either a lack of control or wayward finishing was costing him an assist. Sanchez was buzzing around as always, but Santi and Wilshere had faded badly. It was telling that this was their first start in quite some time.

With that, Elneny came on for Jack and the match began to shift in appearance. We suddenly found our zip. It helped that the news of Newcastle going 3-1 up – even with Mitrovic being sent off – filtered around the stadium like contagious fire. Our fans suddenly began to drown out the lively pocket of Villa fans – who were quite brilliant if you take into consideration the abomination of a season they have had to witness – and our noise looked like it filled our players with a sense of haste.

Soon enough, it was 2-0. Ozil and his vision could not be denied for much longer, and as he broke into the box, his low pass found a stretching Giroud, who beat Bunn at his front post.

2-0, and it was the goal the occasion deserved. Giroud raced to the Arsenal bench and embraced Rosicky, which was an endearing moment for everybody who witnessed it.

Soon enough, the clinching goal at St James Park came through to us, and it was party time.

To add to our joy, Sanchez split the Villa defence and there was Giroud on the stretch again, and his finish was brilliant. It earned him his first Premier League hat-trick, and it only polished what was fast becoming one of the best days of our underwhelming season.

There was time as well for our departing club captain, Mikel Arteta, to come on to the field as a late substitute, and his late burst into the box saw him cannon a shot onto the crossbar, deflect off a stricken Bunn, and into the net.

The final whistle soon blew, and the spurs jibes were in full swing. We were enjoying the moment, the long months of spurs lording it over us were transforming into sheer, crazed glee.

We had finished above them, for the 21st consecutive year.

The players came back out, with their offspring in tow, and did a lap of the stadium. The majority of us stayed and gave them applause. They were all wearing Rosicky shirts with a Number7 on the back, which was a wonderful touch for a player who was with us for ten years, and deserves every bit of adulation he receives.

Mikel Arteta waved goodbye, as did Flamini and the Little Mozart himself, and with that, the season, which promised so much pain, gave us an amazing surprise to appease us.

A quick thank you and a show of appreciation to the departed three. They all gave everything to the cause.

Now back to the hilarity that is spurs.

Tottenham fluffed their lines. They once again only have themselves to blame, and we surely cannot do anymore to gift them a chance to end their Arsenal curse?

I think, after seeing our neighbours capitulate so beautifully, I will petition the editors of the Oxford English Dictionary for the inclusion of a new word.

Spurs – the definition –  to throw away an opportunity by showing a weakness which is an intrinsic characteristic of the subject who frittered away the aforementioned chance.
Proper Use – Oh mate, they’ve gone and spurs’d it right up……….