Arsenal had a fantastic unbeaten record in the FA Cup to preserve, but they needed to be able to preserve their players during this match, as three players were taken off through injury, but there were plenty of reasons for optimism for Gooners, as our two goal shy strikers grabbed a brace each and we stayed in the cup for yet another round. 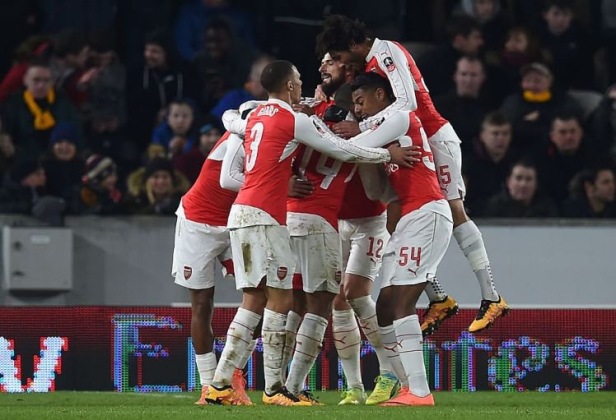 There was much conjecture regarding lineups for both teams, as fixture congestion looms above them. Poor form for the Gunners and the Tigers – no win in five and one win in five respectively – and a league game in the weekend meant that rotation would be mandatory. With Hull firmly in the race for promotion and Arsenal not giving up on the title, it meant that Steve Bruce and Arsene Wenger opted to rest certain players with a view to naming a stronger team in the weekend.

Mesut Ozil, Alexis Sanchez and Aaron Ramsey were sitting on the bench if the game went as the first tie did, but Arsenal’s team was still strong enough to earn victory.  Also, the much heralded Jeff Reine-Adelaide was on the bench and Gooners would have been eager to get a glimpse of the youngster.

Chambers in place of Hector Bellerin, and Gabriel and Mertesacker continuing in the centre of the backline, as did Kieran Gibbs. Mohamed Elneny and Mathieu Flamini comprised the centre of midfield, and Alex Iwobi was given another chance to impress the boss in the Number 10 slot. Another player who had a lot to prove – but in vastly different circumstances – was Theo Walcott, who started on the right, with Joel Campbell on the left and Olivier Giroud – who became a father for the second time the night before – preferred in the lone striker role.

An unfamiliar looking eleven, but a strong one nonetheless. The start of the game saw the Gunners quick out of the blocks – with a determined Walcott looking dangerous and linking well with young Nigerian Iwobi. Despite making their own changes – Abel Hernandez and Jake Livermore were left on the bench and loanee Nick Powell installed into the side – Hull looked steady but showed little endeavour for attack and avoiding penalties. It was clear from the first ten minutes that there was one team keener to make progression in the Cup – and it was the side who were unbeaten in this competition for three years.

Possession was Arsenal’s mostly, but a worry in the form of Per Mertesacker and a nasty head wound after an aerial clash with Nick Powell was a reminder that injuries as well as being knocked out were potentially harmful to the Gunners season. Thankfully for both sides, after a lengthy delay, they both played on, although Nacho Monreal took his place as it was clear he couldn’t go on.

Hull then leapt into life. Through a set-piece, the ball bobbled out to David Meyler outside of the box, and via a deflection, it looked goal bound, although David Ospina produced a fantastic reaction save to keep the Tigers out.

Ten minutes later, a lifeline for Arsenal. David Meyler, the same player who nearly gave Hull a shock lead, inexplicably played a horror pass across the box from out wide that Mesut Ozil would have been proud to call an assist. The lurking Olivier Giroud snaffled the opportunity and he had the perfect accompaniment for the new addition to his family, and the end of his goal drought.

Only two minutes later, Kieran Gibbs very nearly scored a contender for goal of the season. A corner found the England left-back roughly thirty five yards out. He wrapped his foot around the ball and the hero for the Tigers in the first tie – Eldin Jakupovic – had no answer, but was saved by the angle of the post and bar.

What was clear was that the goal galvanised Arsenal. Prior to the breakthrough, the goal was taking on familiar nods toward the first tie. Play bogged down in midfield and even though there was plenty of Gunners possession, there was far too much slow-paced passing. Arsenal had created chances, but this time around, we had managed to take advantage.

The half time whistle blew and the Gunners had the goal and the lead. Hull would have to come out and break their formation if they wanted to stay in the tournament, which would suit Theo Walcott, who had flitted in and out of the side as he struggled with his confidence. He had flashes, but much like his season, he couldn’t find consistency. In fact, he was pretty dire.

The second half began and Arsenal looked to set up for the counter attack as opposed to the first half when they took the game to Hull. The impetus had shifted to Steve Bruce’s side to attack, and they wouldn’t have a better chance to score with the makeshift defence the Gunners had – however the first chance fell to Arsenal.

A free kick delivered by Walcott went into the box and was partially headed away to Mohamed Elneny and a quickfire shot had Jakupovic tipping over. Good instincts, but better save.

The sheer amount of minutes on the pitch began to take a toll on Wenger’s side, and Gabriel went down with a leg injury. He hobbled off to be replaced by Aaron Ramsey. The Welshman took to the centre of midfield, and Flamini went into the defence as Arsenal took another nudge towards shakiness and uncertainty.

So that left a defence of Flamini, Chambers, Monreal and Gibbs. This had a familiar feeling as Arsene was more than a dab hand at playing full-backs at centre back – Monreal and Debuchy last season performed admirably – but it just meant that Hull could smell a chance. It would mean aerial bombardment, testing Arsenal to the limit.

This was hardly what Arsenal needed with a North London Derby just played and another important League game on the horizon. This should have been comfortable, but thanks to injury and some poor form, it was turning into a real battle.

Mohamed Elneny was one of the few who was above average, and his recent displays point toward a player who could prove to be useful for the run in. A great eye for a pass, tidy on the ball and robust enough to put in a decent tackle, the Egyptian was buzzing around the pitch, putting out fires everywhere. Hull were starting to press more and more though, and an Aluko ball skimmed off Ramsey’s head and fell agonisingly wide. Sighs of relief from the noisy away fans and millions of Gooners worldwide.

Then, Theo advanced down the left and clipped in a ball that was primed for a Giroud run. Indeed, it was the Frenchman who latched onto it and his finish was as clinical as his first. It ended a spell of Hull pressure and gave Arsenal the two goal cushion they craved. 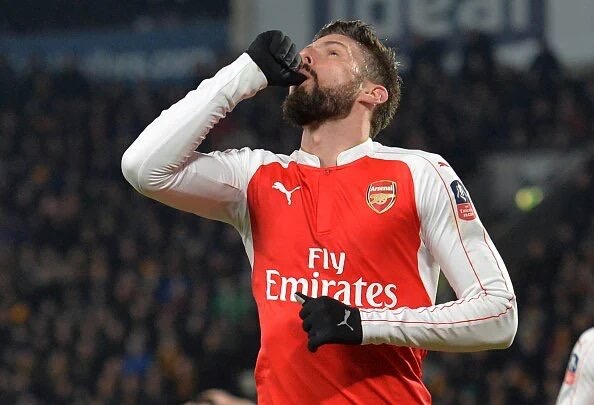 Straight after the goal, Ramsey signalled to the bench indicating his shoulder was hurt and he needed to come off. To replace him, it was THE JEFF. The young Frenchman, for only his second senior appearance, took to the field and it was what the Gooners who had travelled to Hull deserved.

This replay was proving to be costly. Three injuries, two of them at the back, meant that the weekend game Vs West Brom could see us call on Steve Bould at centre back! Arsene would have been worried, but there was no time for that as there was a third goal to enjoy.

Joel Campbell – who had been extremely busy covering Flamini at right-back – slid a beautiful pass to Theo Walcott, who was in the box on the left. He took one touch before placing the ball with his right foot into the far corner. The England man had a poor first half, but he never hid, and he now had an assist and a goal. this may just be the confidence booster he needs to finally get back to the level we know he possesses.

The match had once again turned. From fifteen minutes of Hull pressure as they sought an equaliser against a weakened Arsenal, then a sucker punch from the Gunners killed the game as a contest. From the moment Giroud plundered the second goal, they dominated proceedings. They got the third soon after and Theo Walcott then added a fourth.

Alex Iwobi fought off a challenge before putting a ball into Theo. He took a shot from the right of the box and a slight deflection took it past a wrong-footed Jakupovic. Game over.

Alex Iwobi was tidy and clever. Theo silenced a few, though he has got a way to go to earn consistency. Giroud ended his goal drought. Joel Campbell was excellent at both ends of the pitch and Mohamed Elneny was a dynamo. Amidst the negativity of the injuries incurred and large patches of meandering play, there were more positives to take for Gooners.

Aside from a flag-happy linesman, players dropping like flies and a tough battle, Arsenal had earned another win and given some players a shot in the arm who desperately needed it. If we can put together a defence against the Baggies then we might just grab a win!

In terms of the FA Cup though, Arsenal maintain their unbeaten run in the competition and will face Watford at The Emirates in the next round. When it will be played though, is up for argument……