Hindsight can be a wonderful thing. Memories of fantastic moments take on a golden hue as recollection makes every instant that little more vibrant.

Hindsight can also be a little blinkered.

Upon remembering our simply amazing group of players that were responsible for five trophies in four years between 2002-2005, certain players take precedence. The artistry of Dennis Bergkamp. The razor sharpness of Thierry Henry. The invention of Bobbi Pires. The sheer defiance of Gilberto Silva. The crazed antics of Jens Lehmann. It is inevitable that we overlook some players and slices of time. It happens to all and will happen in the future.

Freddie Ljungberg is one who isn’t forgotten, but his talents and input are often reserved to the second row to sit behind such luminaries as the ones named above. His importance to the team is common knowledge by all Gooners, and how good he really was. Consider this article a nod in the direction of how special our rouge-haired Swede really was.

Ljungberg joined Arsenal from Swedish side Halmstads in 1998. He had been scouted extensively, but his performance for Sweden in an international game against England prompted Arsene Wenger’s hand and a £3m deal was rubber-stamped.

His debut was one for his own personal highlight reel.  With Gooners already revelling in a 2-0 lead over perennial title rivals Manchester United, Freddie was sent on as a second half substitute. Much like when you place your new goldfish into new surroundings whilst still encased in the bag you brought him home in, this short cameo was designed to help the diminutive Swede acclimatise to the rapid and physical demands of the Premier League. It seemed that Ljungberg didn’t want to stay in the bag for long, as a ball aimed forward found a marauding Ljungberg. A  nonchalant lob over the esteemed Peter Schmeichel gave Arsenal a three goal lead and it also endeared Freddie to Gooners instantly.

Freddie had a rare talent. One that many midfielders seek but it it is at the expense of another skill. Ljungberg, just like Paul Scholes, had an inherent ability to turn up at the exact moment and at the precise position needed to score. The runs they made were stealthy and optimised to wreak the most havoc. With their talented teammates taking the spotlight and defenders attention, these men who were short in stature but gargantuan in hunger were able to take full advantage and clean up in the box.

Perhaps what underlined his importance to these trophy-laden campaigns was his efforts during the tail-end of 2001/02. With Manchester United lurking in wait for any slips in results, Arsene Wenger could have done without the mercurial Robert Pires going down with a cruciate  ligament injury. Pires had set the league alight with his sumptuous skill so to have to adapt and name a side that didn’t include the genius Frenchman could have been an obstacle that would end the Gunners title dreams.

Step forward Freddie Ljungberg. His bond with Bergkamp bordered on telepathic as game by game, Freddie’s runs were picked up by the Dutchman and the Swede finished with style. Our club famously, gloriously, won the league at the home of Manchester United, but it was Freddie’s goalspree in the six games preceding that celebrated night that allowed Old Trafford 2002 to happen. Six goals in six games from the Super Swede. He ended the season with seventeen goals and the Barclaycard Player of the Year Award.

It was the coolness of his finishing. It was his rapier runs. It was his will to win that was evident with every lung-bursting run. If it weren’t for his poor record with injuries, then his total of seventy two goals in two hundred and sixteen games would surely have been improved upon. As it stands, it isn’t to be scoffed at.

Freddie Ljungberg, with his red hair of which we sang, had a touch of the celebrity about him. A dash of the rock star. He modelled for high-end fashion houses. His hair sparked a trend which saw thousands of men attempt to splash some adventure into their humdrum hair – and fail epically. I too, tried to follow my hero, but only succeeded to dye the whole top of my head red, and then try to wash it out. Going to work with pink hair certainly wasn’t the desired result.

A recent discussion I took part in surrounded what was the best assist in recent memory. A unanimous verdict was Dennis Bergkamp leading Juventus players on a merry dance, pulling them out of shape before sidefooting a ball into the path of a rampaging Freddie Ljungberg, who of course plundered the goal. The assist was archetypal Bergkamp, but the run and finish was pure and utter Ljungberg. The Swede added another dimension to our side, for when Pires, Bergkamp and Henry needed an outlet or found the opposition had entrenched themselves in their own box. He was a skeleton key and always seemed to produce when it mattered. 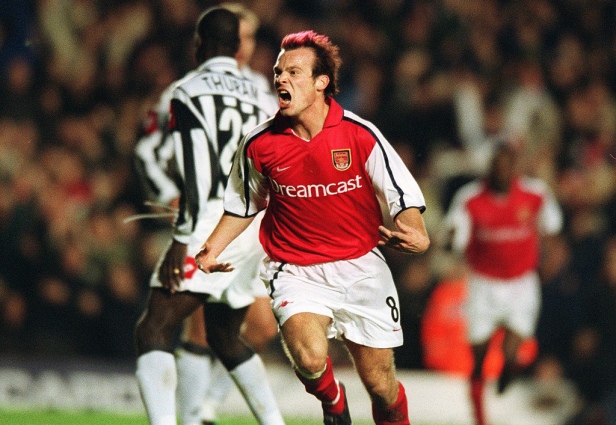 Thinking back, his most precious commodity was his presence in the big games. Not every player had the ability to imprint themselves onto matches carrying huge amounts of pressure. Whenever the demand for someone to rush above the parapet arose, then it invariably involved Ljungberg.

F.A Cup Finals ( 2001 and 2002 ), matches versus Chelsea, United, Tottenham. No team was safe from the lethal boots of Ljungberg. Never mind that he was plagued by injury – even migraines haunted Freddie so much he was forced to miss games – Freddie seemed to thrive in the heat of the battle and no energy was left unspent. Was it a coincidence that it was from his shot that Wiltord profited from at Old Trafford in 2002? No. To quote his song, ” We love you Freddie, because you’re everywhere”.

Freddie Ljungberg has now returned to the club and fans which truly adore him, in a coaching capacity. It is his rightful destination after contributing so much on and off the field. He and his hair will live long in the minds of Gooners. Testament to this is his placing in the Top 50 Gunners. He came 11th. 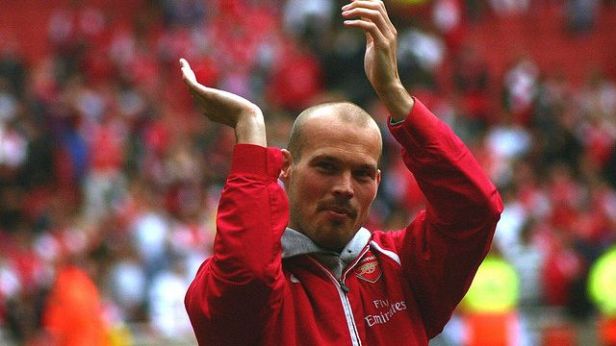 This article isn’t a reminder, as Gooners haven’t forgotten. This blog is just a chance to look at a player who I adored, and so did every other Gooner who watched him.