There always seems to be a charity that are vying for your hard earned readies. Whether it is the latest natural disaster to strike our planet, or a televised night in which celebrities gamely fool around in order to drum up funds from the gracious viewers.

This raft of organisations donating time and money to various causes all have the same thing in common – They all deserve the aid.

Being a football supporter these days means that you see your club involved with some fantastic fundraising schemes. Only recently, Arsenal donated a days wages to the Arsenal Foundation.  This Foundation in turn does work and donates funds to their charity partners, which are Save The Children, and the Willow Foundation. 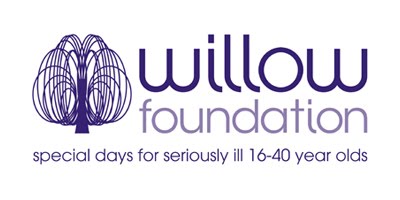 As Gooners, the majority of our fanbase are more than familiar with the work of this wonderful charity. They have worked closely with our club since their inception in 1999 and the founder of this organisation is none other than Arsenal luminary Bob Wilson and his wife Megs.

Mr and Mrs Wilson began the Willow journey after their beloved daughter Anna tragically passed away at the age of 31. The heartbroken parents vowed to keep Anna’s tremendous spirit alive through charity work and Willow Foundation has sprouted through their hard work and love for Anna.

The Willow Foundation has continuously aided people from the ages of 16-41 enjoy experiences which their illnesses and conditions wouldn’t normally allow them to. Whether it be a semblance of the old life they remember before sickness struck them, or a once in a lifetime event that will forge memories that will endure far longer than the condition that besets them. Willow Foundation acts as a magnet which brings families a little closer under times of ridiculous levels of duress.

Just like Arsenal Football Club, there are a smorgasbord of companies that fundraise and promote this amazing organisation, but it isn’t just these titans of business.

Perhaps what deserves a little more of the spotlight is the astonishing efforts that small groups of people, or in this inspiring case, one man, go to in order to give back as much as they possibly can. The reason for their courageous acts of generosity? They have been touched by adversity and or loss, and the Willow Foundation’s work is as close to their heart as the family members they devote themselves to.

I’m writing about The Willow Foundation thanks to the one fellow who I mentioned earlier. This man’s name is Luke James. Before I inform you all what superhuman activity he is performing in order to glean cash from the public, I’ll tell you his story.

Luke was diagnosed with Non Hodgkins’s Lymphoma on the Third of December, nine years ago. It was his First Year Wedding Anniversary. This strain of disease is a form of cancer and affects the Lymphatic system, which is a part of the immune system. Luke was pretty sure a month beforehand that he had something serious as he had been in hospital to have a lump removed from his face and neck that was roughly the size of a grapefruit.

Normally, news of this nature would ruin a special occasion such as a wedding anniversary, but the worst information had still to be disclosed. Luke was given a forty percent chance of survival – such was the aggressiveness of his condition. Of course, Luke and his wife were absolutely devastated, but seeing as they had two young children, their world was broken.

Luke underwent five months of gruelling chemotherapy and seemingly endless trips to hospital. The life of Luke and his family were put on hold as for nearly half a year, they held their breath for good news. Another six weeks of radiotherapy followed and Luke freely admits that he was on the ropes. Not only were the medicines and treatments that were supposed to be saving him slowly sucking his soul, but his family were suffering almost as much.

It was during the tail end of his trips to the hospital that a helpful nurse informed him of the wonderful work of Willow Foundation. Luke found a focus once he began making connections with the charity, and thanks to Willow, he vowed that the Special Day he wanted should he survive, would be to renew his wedding vows with his beautiful wife. Neither wanted their original wedding date to be synonymous with the devastation that it carried since the diagnosis, so this would remedy that.

Luke started to think about the future with his family, not doubt about his presence on the earth. After the chemotherapy and radiotherapy, Luke was given a miraculous all-clear and Willow Foundation gave him the ultimate reward that dragged him and his family through the days dogged with darkness. They finally renewed their wedding vows and according to Luke, it was everything they wanted and more. Once more, as they promised and have done for thousands of people, the Willow Foundation came through and then some.

In 2013, Luke decided to run the London Marathon for the Willow Foundation. In the December of that year, his training was going well until he had to revisit the hospital to have two tumours removed from his stomach. Against the advice given to him by specialists, he decided to run in the Marathon anyway, despite a lack of training.

Luke finished the Marathon and was rightly proud of himself for the funds he raised and for actually crossing the finish line.

This brings us to the present day. Currently in his second remission, he wanted to run the Marathon again and exceed the amount he raised the first time. He felt he had to do much more than his last effort however.

Luke has decided to run TWO MARATHONS in a week, the Brighton and London Marathons. A herculean effort deserves a reward, and Luke wants to raise in excess of £5000, so other young people and families can have the Special Day that may just give them the hope to hold on, just like Luke had.

Arsenal legend Bob Wilson is at the helm of this amazing charity. As Gooners, I hope it may appeal to some of you as it has me.

Please do give anything you can. Luke is a routine, hardworking family man, and this may bring home how easy it could have been any of us that could have suffered as he and his family have. They still live every day with the shadow of the disease lurking in their minds eye, knowing that every day needs to be relished.

Once again, Luke’s page is here.

I hope his story and the work of the Willow Foundation has struck a chord with at least one of you. Any donation, any amount is received graciously.  Thank you for reading.