Arsenal, winners of the F.A Cup in the last two years, began the defence of their silverware and also an attempt to be the first team to win this historic competition three times in a row, with a well fought victory over Sunderland.

The 3-1 scoreline matched the outcome when these two sides met last month, and to add an even eerier note, the same three goalscorers featured in both games. Joel Campbell, Aaron Ramsey and Olivier Giroud were the men in question and their exploits mean that once again, Arsenal are in the bag for the Fourth Round Draw.

The speculation before kickoff was regarding squad rotation. Sunderland Manager Sam Allardyce went a little further in his press conference prior to the game, stating that it would be the bosses of the Premier League who should take the blame if the Black Cats made wholesale changes. With their precarious position in the League, their midweek game would be their main focus and Arsene Wenger was expected to follow suit.

There were changes in both sides, but the widespread utilisation of their full squads was not seen.

Arsenal kept Petr Cech in goal and had Matt Macey on the bench, with regular deputy David Ospina injured. Per Mertesacker was given the day off from the matchday squad, with Brazilian Gabriel filling in alongside Laurent Koscielny. Nacho Monreal was allowed to rest his industrious feet on the bench, which left Keiran Gibbs the left-back slot, but Hector Bellerin jetted back quickly from his break in Amsterdam to make the first eleven, much to Mathieu Debuchy’s assumed chagrin, as the Frenchman took his place on the bunch.

In midfield, leading light this season Mesut Ozil, was given a break but chose to spend his day off as a spectator cheering on his teammates, which only endears himself to Gooners. His playmaking duties were to be shared though. Calum Chambers once again continued his baptism in the defensive midfield spot and he was ably aided by Alex Oxlade-Chamberlain.

More interestingly, Alex Iwobi was given a start. The promising Nigerian – related to former Sam Allardyce purchase and all-round genius Jay-Jay Okocha – was in an attacking quartet of Theo Walcott, Joel Campbell and Olivier Giroud, and he was soon to evidence why Wenger rates him so highly. 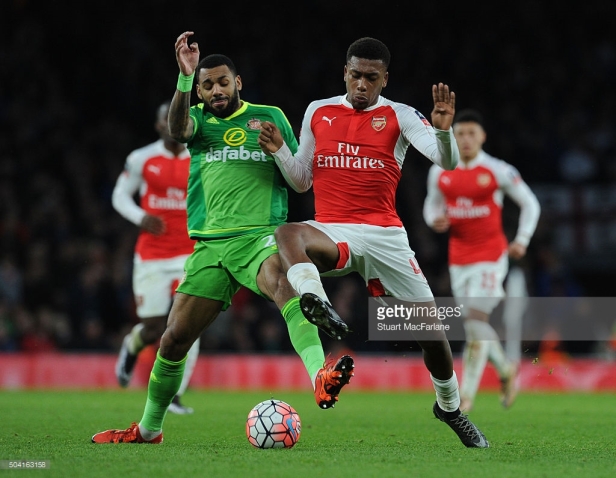 Sam Allardyce, despite the ranting about ‘flogging his side’ and the ridiculous fixture schedule, changed his side, but not so it was unrecognisable. In fact, the Black Cats named a strong side, with only Jermaine Defoe, Fabio Borini, Yann M’Vila and Costel Pantilimon among the regulars to miss out.

It was indeed Pantilimon’s absence that raised the most eyebrows, especially when it came to his replacement – Jordan Pickford. Pickford was on loan at Preston up until last week until Allardyce recalled him and he was thrust straight into the side.

The match started quickly but it was the Black Cats who were playing in green who broke the deadlock. Arsenal had threatened the goal  with a shot from Gibbs, but Jeremain Lens – supremely talented but not particularly great at building rapport with his respective gaffers – nipped the ball from a hesitant Laurent Koscielny and then blasted home past Cech. It was a mistake from Koscielny which seemed alien under scrutiny as his displays this season have been serene, but without his usual partner Mertesacker, he didn’t have the same reassuring presence alongside.

Lens’s finish was excellent, but it was the poor ball juggling from Koscielny which made the chance. The Gunners wouldn’t have to wait long to restore parity though.

Theo Walcott raced down the right hand side after being fed by an intelligent Alex Iwobi and it was Walcott’s presence of mind to hesitate his progress on the byline and look for the runner. This time it was Joel Campbell in from the left hand side and he half-volleyed a skipping cross past Pickford with a first time effort. Quite excellent. 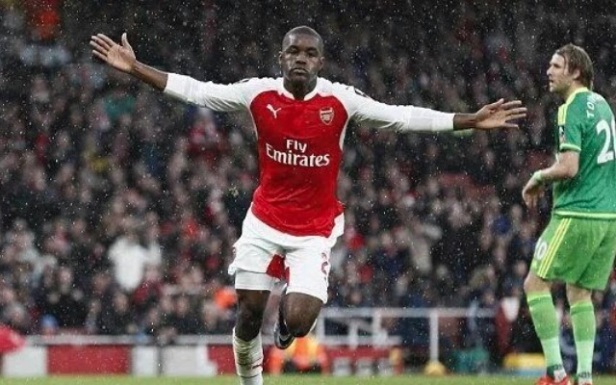 The game was primed for a tussle, but it wasn’t overly physical. In fact, for the rest of the half, Joel Campbell and Alex Iwobi aside, there was no real urgency from the Gunners. Content to hold onto the ball and attempt to pull their opponents out of shape, the pace slowed but Sunderland always looked dangerous with the industry of Watmore and Lens.

The second half was a little livelier than the tail end of the first, and it was Alex Oxlade-Chamberlain who provided the spark. Eking out a couple of yards of space about twenty yards from goal, The Ox let fly with a curled effort that left Pickford grasping at air. Unfortunately, the ball rebounded off the woodwork and Walcott could only fire his first time follow-up wide.

Sunderland weren’t quite finished and the score was still level and whilst the scoreline was even, then Allardyce and his men would have a chance. Their moment to swing the match in their favour came soon after Arsenal hit the post, and Steven Fletcher would be the man presented with the opportunity. The Scottish striker outmuscled Gabriel in the air and met the ball with his head from a fine DeAndre Yedlin cross. It had Petr Cech beaten but it cracked off the bar. Duncan Watmore collected the loose ball but he couldn’t find the target. The misses were to prove fatal for Sunderland’s Cup dream.

The seventy second minute was when Arsenal took the lead and punished the Black Cats profligacy. Hector Bellerin instigated a one-two with Joel Campbell, and the Costa Rican’s return ball had interest on it, but the Spaniard’s electric pace allowed him to collect the ball before it went out of play and his low cross found a lurking Aaron Ramsey – a sixty-seventh minute replacement for Alex Iwobi – who nicked it past Pickford.

2-1, and the wind had been profoundly punched from Sunderland’s midriff. Three minutes later, it was 3-1.

It was Hector Bellerin again who took up the assist mantle in the absence of Mesut Ozil, and he laid the ball on a plate for Olivier Giroud in the box. The Frenchman made no mistake and continued in the same vein he has assumed all season, leaving the young Pickford with no chance.

The rest of the match was played out with a smattering of chances but with both sides knowing their fate. When the final whistle blew, it meant that Arsene Wenger could still boast of the fact that he has never seen his Arsenal side exit the F.A Cup in the third round.

It was mission accomplished – and while Sunderland did look dangerous in patches, with Watmore and Lens providing pace and ingenuity at times – Arsenal always looked capable of shifting up the gears. That was what worried Gooners in fits and bursts – a seemingly lackadaisical approach at times. When the team you support are potentially world-beaters when in the mood, a display that lacks a little urgency and initiative is somewhat frustrating.

The negatives weren’t profound enough to carry over past the final whistle, or even for the duration of a half. Progress was made to the next round of a cup in which Arsenal have a love affair. One that has been ongoing for so long that marriage is the next step.

Key men rested, squad players impressed and we are still in the Cup. All boxes checked.

2 thoughts on “Arsenal 3-1 Sunderland – The Defence of The F.A Cup Has Started.”