The last of the throaty exhausts spewed its noise past the security bollard which marked the sole entrance and exit to the sprawling London Colney Training ground. One by one, the Lamborghini’s, Ferrari’s and  Bentley’s had left the car park until one car remained.

Arsene, still in his training gear but currently adding his usual well padded coat into the mix, walked over to the now departing security guard. Jimmy was new to the staff roll at Colney but Arsene still made the effort to hand him his Christmas card and bonus personally.

Jimmy greeted the Arsenal boss with a sheepish look and a curt nod of gratitude. Guilt was now overriding any thought of his impending financial gain. Jimmy took to his waiting cab with a quick look back at the man who had just given him a gift. Arsene was at the main door and as usual, the last person to leave the complex.

It was meant to be a simple transaction and seeing as he was new to the job, he was meant to have no emotional ties to the people who worked there. All he was asked to do by this anonymous person was to leave the alarm codes by the unlocked security desk. Payment was wired promptly to his account and everything was going swimmingly – until he had been handed his ill-deserved bonus by the man who would be hurt deeply by tonight’s nefarious plans.

It’ll be fine, he told himself as the cab snaked its way toward the airport through the holiday traffic and dusting of snow. I can forget about it whilst sunning myself on a beach somewhere halfway across the world.

He knew though, that guilt would be packed in his suitcase.

Arsene climbed the stairs and made his way past the illustrious photos on the walls of former Arsenal greats. It always inspired him to do his utmost in every aspect of his job and was part of the reason that he was always the last person to leave every day as well as the first one through the doors.

He had plans for the Christmas Day, but they wouldn’t be hindered if he just stayed behind for an hour to compile the comparison reports for the fitness training today. Leave no stone unturned in your quest for glory, he thought.

He did manage to drag his gaze from the folders and the computer monitor for a few seconds to admire the view from his office window. The snow, normally so rare during Christmas, was now falling liberally upon his kingdom. The sprawling centre – now sans people and activity – took on a lonely but beautiful vista.

Just outside of his view a car approached, but it wasn’t here to pick up the Gaffer. Clambering out of the nondescript saloon were two men of contrasting height and hairline. The smaller of the two led the taller and significantly more hirsute to the security desk whilst the inconspicuous car drove away.

The taller of the two – Harry – was getting antsy. He wanted to get involved, but so far he just followed Micky everywhere. Micky opened the door, Micky was opening the envelope with the super secret codes – Harry wanted to do something. 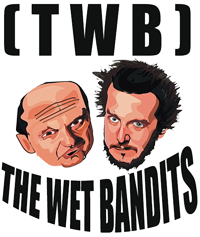 He grabbed the sheet of paper that had the numbers on it. Micky protested but thanks to the sheer gulf in height, he couldn’t reach to grab the sheets back. With one hand, Harry punched in the code and with the other he held it aloft so his cohort couldn’t get them.

Micky was now jumping and swinging his arms but he was laughably far away from obtaining the codes. All of a sudden, all the lights went down and the main complex was illuminated by just one colour – red.

” Uh-oh Micky. I’m sorry “. Harry stopped what he was doing and immediately Micky took off the woollen hat he had been wearing – to keep his bald spot warm – and began to thrash him with it whilst emitting frustrated sounds which wouldn’t go amiss from the cartoon dog Muttley.

Micky stopped hitting his friend once he noticed what the alarm interface was displaying – Complex Lockdown. It meant that all entrances and exits were locked. A cold swell filled his stomach and despite the low climate, he began to sweat.

Harry, noticing that his friend was upset after reading the alarm, decided to help Micky. He punched the alarm box as he was always told by his parents – if in doubt, give it a clout. It worked about fifty percent of the time. This wasn’t one of those times as a sole tendril of smoke signified that the circuits – and their hopes of unlocking the doors – were fried.

Arsene, now finished with his work, had let his mind drift to the impending Christmas celebrations with his nearest and dearest. Normally he enjoyed escaping the country on his sparse days of rest, but a day with good food and good company sounded perfect.

Arsene snapped out of his reverie with Micky’s voice reverberating through his ears. He immediately got to his feet and took the stairs two at a time. He went to the door with a mind to go to the source of the voice, which came from the security desk. He went to swing the door open but it wouldn’t budge. Now that he was here  he also noticed that he was shrouded in red as all lights were out aside from the odd red bulb which signified that the training centre was in Lockdown.

Arsene knew that it was his job to set the alarm as he left. Now that the alarm had been set incorrectly, he knew that he must alert the authorities. He made the short trip to reception and picked up the phone. No connection…….

Five minutes earlier, Micky had took it upon himself to cut the phone lines, which were conveniently located nearby. It would have to be the Old School approach for he and Harry then.

Meanwhile, Arsene went back to the door and in plain sight was the security desk. He could see, amongst the flurry of falling snow and poor lighting, two shadowy figures.

A cold chill zipped up his spine. He knew what he must do.

Thanks to prior research by the two bumbling criminals, they knew that to gain entry by any way other than the doors, they would have to go via the cellar. It was all the way around the other side of the complex though, so they trudged off, the littler swinging his arms intently and the other swinging his head around in a vain attempt to catch snow on his slavering tongue.

Arsene headed straight for the supply room, normally the domain of Vik Akers and his son. He grabbed a large net which was normally used to carry a large amount of footballs and filled it with various items. He then got to work with an agility that belied the Boss’s age.

About twenty minutes later, not helped by the worsening conditions and the fact that Micky had to stop to catch his breath every two minutes, the clumsy pair of burglars had made their way to the cellar. It was a small double door, and it had five steps declining from the ground on which they now stood. Finally, they were making progress, Micky thought.

” Harry, you first pal. You get in, case the joint and report back to me. You got it? ”

Harry whipped his head around like a dog who had just caught sight of a squirrel. He enthusiastically nodded. He was overjoyed at being given a super special task. He would be the best at casing the joint, ever!

Despite Harry’s lack of smarts, he was good at his job. Trained extensively by Micky, his only weakness was a severe lack of attention.

Harry immediately went to the steps. Unaware that Arsene had already been to these very steps and poured cold water on them, Harry’s boundless energy saw his first foot attempt to plant on the step and viciously zip forward onto thin air. His body followed suit and the result was a mass of limbs down by the door. Mission accomplished, thought Harry.

He dragged himself up, using the handrails, but the floor was equally icy. For the next five minutes it was a series of grunts, legs performing an ungainly jig and painful falls.

” Harry, plant one foot against the wall, then the other. It’ll prop you up. ”

Harry, now sporting a swelling above his eye, beamed a smile at his friend. He did just that. Taking it steadily, he was now upright and tried the door. His begloved hand wrapped itself around the doorknob and twisted. This set off a chain of events behind the door, involving chains and pulleys which was fashioned quickly by Arsene. The result as Harry swung the door open, was a net from a goalframe engulfing the large Harry and a flock of training bibs flying his way. The bibs, covered in industrial glue, now covered his view entirely and caused him to panic and fall heavily to the frozen floor again.

Harry clawed at his face but the bibs held fast. The net was now constricting his movement and he now resembled a large salmon attempting to evade capture.

Micky slapped his protruding forehead. He would have to do this himself. He clambered carefully down the five steps, clasping tightly to the handrails for purchase. At the foot of the steps, he took out his penknife and ripped a hole through the bibs so Harry could see and also freed the big lunk’s legs so he could walk.

Harry looked up at his mentor.

” Yeah Harry, Spurs Bandits. Now get your butt up and walk behind me.”

As they both gingerly got to their feet, Micky wondered who had set up these elaborate pranks. They were designed to stop them in their tracks. This place was meant to be empty? Who was here?

As they stood in the doorway, who knew what else this mystery vigilante had in store for them….

Find out in Part 2,  the thrilling conclusion!!

One thought on “Home Alone – With An Arsenal Twist Part 1.”