After November’s winless run, three points was vital in keeping within touching distance of the top of the league.

This 3-1 win was much like the last two games against West Brom & Norwich – an opponent adjudged to struggle before kick-off, but giving as good as they got during the ninety minutes.

The main difference this time was that we resisted the lure to self-implode and see out the victory.

No Sanchez or Santi Cazorla after last weekend’s draw at Norwich meant that recently fit Aaron Ramsey got his chance to stake a claim in his favoured position of central midfield, and Joel Campbell and Alex Oxlade-Chamberlain were on the flanks.

It was Sunderland who started the better though – two clear chances that Borini really should have buried, thankfully Petr Cech was at his best to deny the Italian.

These acted as warning shots across Arsenal’s bow and on thirty three minutes, Joel Campbell broke the deadlock.

Mesut Özil had been one of the few Gunners to have turned up in the opening half an hour and it was his inch-perfect slide rule pass that Campbell latched onto after eluding his marker. The Costa Rican dispatched it through Costel Pantilimon’s legs and then raced away to celebrate with a child’s dummy! 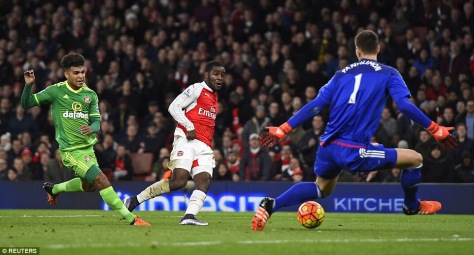 It seemed as if Arsenal would then keep possession and see out the half, but the Black Cats electric start was a herald of what was to come in the last minute of the first half.

The lively Duncan Watmore earned a free kick out wide and it was London Colney fitness room botherer himself, Yann M’Vila, who whizzed it into the box. Olivier Giroud – who had an anonymous first half thanks to the close attention of Sunderland’s three centre-backs – looked to clear with an unfamiliar left boot but instead shinned it past a stricken Cech.

Arsenal ruining things for themselves with no help necessary.

The atmosphere was muted, but that was probably down to a sense of deja vu. The last month was on an eerie parallel with the events of this game and Gooners could have been forgiven for fearing the worst.

Arsene sent out his troops with a more pressing urgency it seemed, but Sunderland soon got back into the stride which had caused the Arsenal back line so much trouble. In particular, Hector Bellerin was having a torrid time and it was his failure to track the run of Stephen Fletcher which gave the Scot a gilt-edged opportunity to give the Mackems the lead. Again it was Cech who kept Arsenal on an even keel.

Sunderland would pay dearly for their profligacy……

Nacho Monreal, so often an effective outlet, took up the slack on the left and burst past his marker with a cutting run inside. He found Ramsey on the corner of the box and his driven cross was fantastically converted by a stooping Olivier Giroud, who had gained a yard on Younes Kaboul.

Redemption for the Frenchman.

This took the wind out of Sunderland’s sails somewhat. The string of chances they had created wasn’t as prevalent as before, although they always looked like they could grab a goal. Was this down to an off-day at the back for the Gunners or the attacking vibrancy of the Black Cats? A bit of both.
Arsenal introduced a welcome figure in the shape of Theo Walcott and his presence will be required for a hectic month, so to see him gain some vital minutes was a heartening sight.

The feel-good factor spread even further when Arsenal caused panic in the box and the ball fell to a lurking Ramsey, who swept home. His attempted knee-slide celebration did not correlate with the joyful occasion! 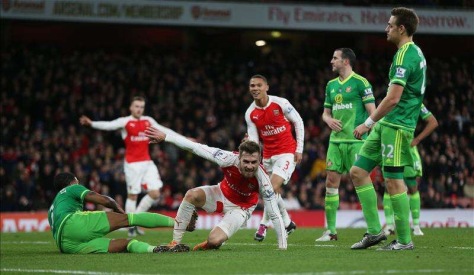 Before Ramsey wrapped things up he had a better chance to finish their opponents after being teed up by Özil, who had been central to everything, but his snap shot was straight at Pantilimon.

Sam Allardyce’s team nearly made Arsenal pay when Hector Bellerin again lost sight of his man and Van Aanholt fizzed over the bar, but it wasn’t to be. The Gunners the scored through Ramsey as described above and finally were able to take advantage of dropped points from City and United.

The final whistle blew soon after and Arsenal were back to winning ways.

Most telling was that this game was just as testing as the trip to Carrow Road and the loss to West Brom, but Arsenal showed mettle and hung tough when they were on the ropes.

This side lives on confidence and the last few results had sapped their life force a little. It took a great performance from Özil, Cech and Monreal, as well as a slice of luck and some true showings of grit, to see maximum points bestowed upon our title bid.

No new injuries, another assist and towering display from Özil, three goals and one point away from deserved leaders Leicester. It’s amazing what a little hard work can gift you.