This match was meant to represent the start of a run of games in which Arsenal would consolidate their title credentials. Five matches against teams who occupy the lower reaches of the table. First up, a visit to The Hawthorns.

Not the greatest start.

Gooners can bemoan the fact that as in recent seasons, a team in which they are expected to roll over has rolled up their sleeves and took maximum points, but the fact is, if Arsenal had finished with a little more conviction one of their eleven shots on target – then they would have left this part of the Midlands with at least a point. 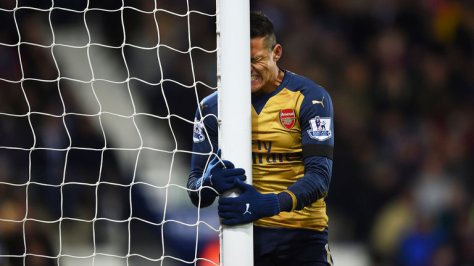 Before the game, the talk was centred on the return of Spanish starlet Hector Bellerin from injury. The speed merchant had started the season superbly and his return would surely boost Arsene Wenger’s side. Mathieu Debuchy could feel slightly aggrieved at his instant demotion to the bench – especially as his form was starting to show once more – but Bellerin took the slot.

The game came too soon for Ramsey and Oxlade-Chamberlain, but their return is primed for next week. Optimism all round for Arsenal supporters it would seem.

Wenger opted for a little more defensive security on the left of midfield, opting for a Keiran Gibbs-Nacho Monreal dynamic, with Joel Campbell dropping to the bench as Sanchez – who really should have been on the bench resting but his enthusiasm is hard to refuse it would seem – took to the right flank.

Mark Clattenburg started the game and proceedings went as expected. Arsenal knocked the ball about, coaxing the Baggies defenders out of position so that Ozil could load the gun.

On the 28th minute, the gun fired.

Mesut Ozil stood over a wide free kick on the right hand side. He whipped it in with aplomb and Giroud had eked out half a yard in order to glance the ball past Myhill and give Arsenal a lead.

An advantage they held for approximately seven minutes.

James Morrison volleyed past Petr Cech after being teed up by a set-piece from Chris Brunt. A familiar weakness for Arsenal’s defence but in all fairness, Brunt’s delivery was exquisite and Morrison’s finish was emphatic. It mattered little to Gooners though.

It was to get worse, via an own goal.

Salomon Rondon found the effervescent James Mcclean on the wing and a routine delivery found Arteta, who diverted it past the onrushing Cech. A lack of communication cost Arsenal dearly.

Arteta’s recall was one to forget for Arsenal fans. Brought on in the 14th minute after an extended knee saw vital midfielder Francis Coquelin taken off, with the prognosis grave for the run of coming games. Arteta, the club’s Skipper, then gave the opponents the lead and bad luck wasn’t finished with the experienced Spaniard. More on that later though.

So, to summarise as the half time whistle blew, Gooners saw Giroud score a header from an Ozil assist, then stumble to an equaliser before gifting the opposition the lead, just to make things interesting. It wouldn’t be Arsenal if we didn’t make things difficult, would it?

The second half began with a little more endeavour, but the Arsenal blueprint was still very much in effect. This wasn’t helped by an opposing team which invited pressure, lying in wait for a chance to sprint up the field and sucker punch the Gunners into submission. It nearly backfired for Tony Pulis’s side however, as Ozil hit the woodwork with a bobbling shot and Joel Campbell, brought on for North London Derby rescuer Gibbs, somehow contrived to skew a four yard shot wide after being set up superbly by Santi Cazorla.

It wasn’t entirely an Arsenal onslaught – despite the 73% possession and sheer number of attempts from the Gunners – as Jonas Olsson nearly punished the Arsenal profligacy with a header which bounced off the underside of the bar.

Back to Arteta’s bad luck. Before this raft of missed chances, Arteta – who was the replacement for the injured Coquelin – was himself replaced. An injury which thankfully didn’t look as grave as Coquelin’s put paid to Arteta’s grim scramblings to make amends and Mathieu Flamini was introduced in his stead.

After much huffing, puffing and Myhill claiming, finally, Arsenal were given the lifeline that their endeavours merited.

Chris Brunt couldn’t handle the fizzing nature of Alexis Sanchez, who appeared in this game to have recaptured a little of the form which makes him one of the most dangerous players in Europe, and his aim of stifling the Chilean with his bodily presence in the box meant referee Mark Clattenburg blew his whistle and awarded a penalty.

Santi Cazorla stepped up to take the spot kick, with a 100% success rate for previous penalties to boost his confidence. Unfortunately the studs on his football boots weren’t privy to instructions and they left the turf at the precious moment of impact, leaving the diminutive Cazorla to slip just a little and therefore send the ball about four storey’s higher than where the target was meant to be. 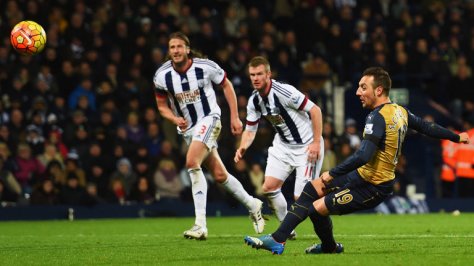 Chance spurned once more. There was little time left on the clock and West Brom held on for the remaining crumbs of time to take all three points and dispel any dreams Arsene Wenger had of occupying the top of the League.

It is easy to delve too deep into the misery of a loss and search for underlying reasons for the tragedy. This time though, thanks to an injury to a player who specialises in cleaning up mess in midfield and a lack of communication from two players who should know far better than to make such a mistake – there is no inherent weakness which led to this failure.

There are still positives to pick at instead of gnawing at yourself through worry. Ozil now has the record for most consecutive assists as he added a seventh in a row, and Giroud has now scored more headed goals since he joined in 2012 than any other player.

It was simply a mixture of bad luck, poor form and some finishing which needs eradicating promptly. Some fans will choose to bemoan the fact that we seemingly always crumble at key points, and that the best teams don’t lose these types of games – but that would be an oversight.

So did we Gooners. Unfortunately, it ended up being a game in which we could rue missed opportunities, not only in front of goal, but also in terms of league position.

We are still in the race, but this was a hurdle in which our legs tripped on. Now we look to the next obstacle. #UTA