Two weeks ago, the corresponding fixture at The Emirates saw a measured performance from Arsenal to take all three points and allow fans a little hope of escaping the group stages.

It seems that the Gunners riled the German giants into dishing out some retribution.

There are some differences to insert into this depressing equation though. These would be the absences of Koscielny, Bellerin, a recognised right winger and Theo Walcott. Even with these players included in the side, the Gunners wouldn’t have left the Allianz Arena with a win, but they would have left with a scoreline that was a little closer.

This match also had the misfortune of being in the shadow of a domestic game that carries much heft. The North London Derby on Sunday looms large on Gooner’s minds and a loss can never be contemplated, so a spot of rotation in the side which has its hand forced in terms of selection would not have been completely scoffed at. Some players would be playing their third game in eight days with this fixture and a well deserved rest could prove vital with the visit of tottenham impending.

Arsene Wenger named a strong side, as Ozil, Sanchez, Giroud and Campbell made up the attacking portion of the team. The midfield partnership of Coquelin and Cazorla was again the fulcrum of the side and a defence formed of Debuchy, Mertesacker, Gabriel and Monreal with Cech in goal made the last line of resistance.

A line of resistance that was to be breached far too easily.

Robert Lewandowski and Douglas Costa – as in the first match – were the duo that were to cause the Arsenal defence problems, but instead of drawing a blank as in the tie at The Emirates two weeks ago, it took only ten minutes for the prolific Pole to break the deadlock. It was his first goal that he had ever scored past the Czech stopper. Brazilian Gabriel completely lost track of Lewandowski to leave the hitman completely unhindered to nod home at the far post.

Then, a glimmer of light. Nacho Monreal fizzed in a ball and Ozil was on hand ( ahem ) to put the ball in from close range. An equaliser that was chalked off even though the fourth official was completely oblivious to the limb that put the ball in the net.

Bayern then compounded the misery, with another dose of aid from the Arsenal defence. A Debuchy woefully short on confidence fluffed his lines and allowed Thomas Mueller time to slot home. 2-0 and Pep’s men weren’t finished wreaking revenge.

David Alaba capitalised on some uncharacteristically slack tackling from Santi Cazorla and carried the ball forward a little before unleashing a curling shot which hit the top corner, leaving Cech with no chance.

The half time whistle blew shortly after and the respite would have been welcome for not only the Arsenal players – whose work rate in pressuring the Bayern men was the overriding reason why they were three goals down – but also for Arsene Wenger, who had to endure the turgid display from the bench.

The second half carried on in the same theme, but this time Arsenal at least looked a threat in an attacking sense, with Cazorla, Giroud and Ozil guilty of profligacy in front of goal and wasting a chance to save a little face.

Second half substitute Arjen Robben punished these spurned chances after he had been on the pitch less than a minute, with a simple cutback not being snuffed out and the hairless Dutchman snaffling up the chance from close range.

4-0. Shellshocked Gunners looked to each other, but they could only find blame in their lackadaisical approach to defending.

Olivier Giroud, who had barely touched the ball, gave travelling Gooners a little something to cheer about, with fantastic control to trap an airborne ball and then volley it past Manuel Neuer.

The comeback started? Not a chance.

Arsenal continued to create chances and had no choice but to attack with the deficit being so large, but Bayern reclaimed possession after an Arsenal move broke down and gave the ball to Douglas Costa. He fizzed past stationary looking Arsenal resistance and then passed to Thomas Mueller, who finished precisely into the corner to heap the shame on the men from London and leave Gooners with a miserable trip home. 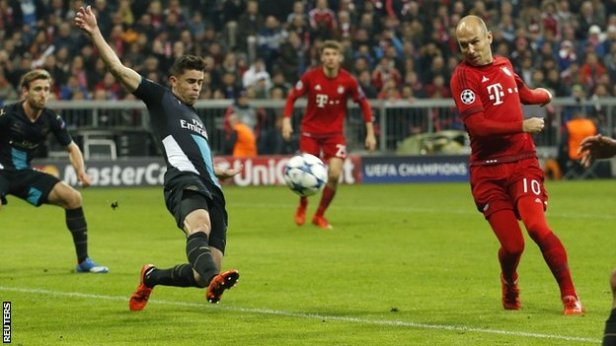 The game finished and with Olympiacos grabbing a winner against Dynamo Zagreb, it leaves Arsene with little manoeuvring. A win against Zagreb at The Emirates leaves a winner takes all showdown in Greece in the final group game if Olympiacos fail to pick up a point in Munich. It is nigh on Mission Improbable, but if qualification cannot be gained, then the feeling from Gooners is that bottom spot in the group is preferable to finishing third and taking part in the second tier of Europe – the Europa League.

Much of fans focus is also on Sunday’s game against their hated neighbours. This tie takes a backward step in priority in comparison with a chance to remind tottenham where they reside in terms of North London power struggles.

This hammering – much like the Sheffield Wednesday Capital One Cup debacle – will be quickly forgotten, or at least heal some wounds, if Arsenal defeat tottenham in the weekend and keep up the pressure at the top of the Premiership.

The European adventure may look perilously close to ending prematurely this season, but the Premiership is the focus, the aim. Three points on Sunday and redemption is achievable.

If Europe is over, there is one silver lining. Less appearances for that abomination of a kit.