This tie was meant to be an audition of sorts for Arsenal’s future. It was meant to represent a chance for Gooners to see the supposed depth that their team possessed. It was a stepping stone for the more frustrated players of our squad to showcase their abilities and reassure Arsene Wenger that they are more than ready if called upon to slot back in to the first team.

A combination of Sheffield Wednesday, a disturbing lack of a competitive edge and defensive naivete put paid to any hopes of an exhibition for Gooners to enjoy. Instead, they made the long trip back to London all the more torturous.

At the start of the game, the lineup seemed a good mix of youthful exuberance and experienced grit. The exciting Alex Iwobi was given a starting berth on the left of the attack and Glen Kamara was the partner of Mathieu Flamini – the hero of the previous round. 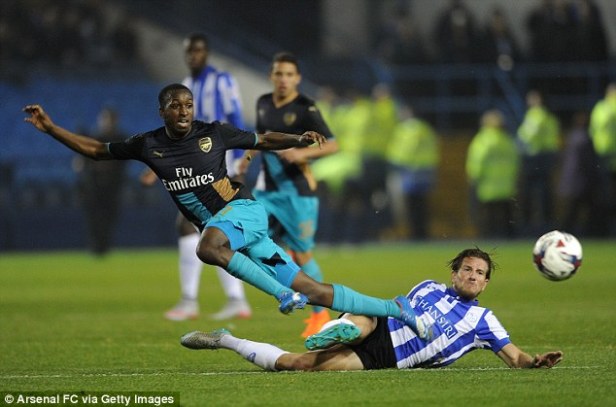 The Arsenal team still had a recognisable feel to it though, with Petr Cech in goal and Mertesacker, Debuchy, Gibbs and Chambers making up the defence. Aside from the big German, the other three can count themselves firmly in the backup category this season but are also considered to be more than satisfactory should their positional usurpers become indisposed.

In attack, the Gunners had Oxlade-Chamberlain given another start after being in the first eleven for the match against Everton in the weekend, as well as Costa Rican Joel Campbell behind the man in form Olivier Giroud.  This side should have had enough to rip the wings off the Owls……

The home team however, didn’t approve of the script. Not having lost since September meant that confidence was running high at Hillsborough – and they had nothing to lose.

From the first whistle, this was abundantly clear. They snapped, harried, chewed at the Gunners ankles. Sheffield Wednesday pressed effectively and whenever Arsenal had possession past the centre circle, blue and white striped jersey’s harangued the man with the ball until he either passed it back or gave the ball away cheaply. This was alarming to see for Gooners, who will have expected far more composure for such an established team.

This pattern continued until the inevitable occurred. A cut back to Ross Wallace who was lurking 18yds out was sidefooted home with aplomb, leaving Cech with no chance and Arsenal looking at a cup exit.

It wasn’t the goal which gave Gooners everywhere cold sweats. It was the injuries to Alex Oxlade-Chamberlain and his replacement, Theo Walcott.

Oxlade-Chamberlain lasted a mere ten minutes before being taken off as a ‘precautionary measure’. The Ox being a replacement in the side in the last two games himself as cover for the normal right-sided incumbent Aaron Ramsey, this will have troubled Wenger.

More distress to come for the Arsenal boss.

Walcott was called into action to take the place of his England comrade but five minutes into his tenure on the pitch and the rapid striker was also injured. The severity of both ailments remains unknown to all – including Wenger himself – until scans have been taken, but Arsenal will be looking to the weekend’s vital game with Swansea City and questioning who will fill the gaps. 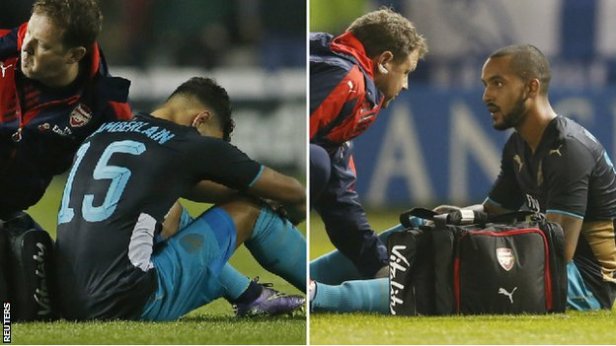 Young Frenchman Ismael Bennacer was the substitute for the substitute and showed flashes of great control but opportunities to embellish were few and far between. Alex Iwobi had the occasional cameo but didn’t do his great talent justice and Glen Kamara was part of a midfield which was overrun by the tenacity and hunger of an Owls midfield. Kamara can count himself unlucky to have made his bow in a game that Arsenal were ridiculously far from winning.

When the second goal went in, courtesy of Lucas Joao’s header, it was no less than the Yorkshire side deserved. First to every loose ball – of which there were many thanks to some errant passing under pressure – and maintaining a high level of concentration throughout was the spanner which caused the Arsenal Cannon to misfire, splutter and ultimately fall apart.
Talk about adding insult to injury…. 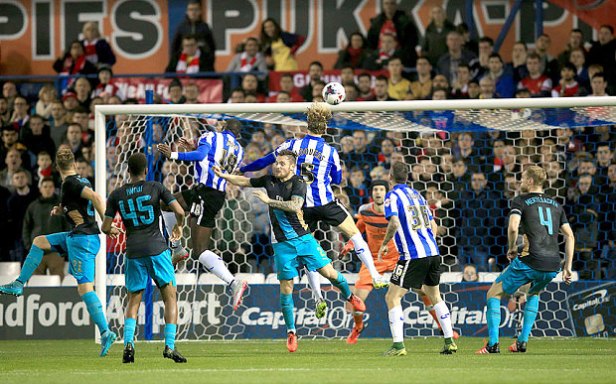 The third goal was another perfect example of woeful defending, with at least three of the Arsenal defenders caught in no-mans-land when Sam Hutchison bundled the ball in after Glen Loovens headed the ball into the danger zone. 3-0 was a fair result for Sheffield Wednesday, who earned the plaudits that will come their way.

What of the Arsenal debacle though?

The bottom line, is that Arsene Wenger included seven current international players in his starting line-up. That isn’t including World-Cup winning Per Mertesacker. He must have felt that this side shouldn’t be overly troubled by the opposition and from the antics on the pitch, it was clear that the players he picked felt the same way. It was woeful at times – only one meaningful attempt on target all game was all Arsenal had to show for their caps and glamour. They were taught a harsh lesson in work ethics during this match and undoubtedly, Wenger will have more than a few concerns he wants to share with the culprits.

Aside from the injuries to Walcott and Chamberlain, forgetting the humbling scoreline, what will have lost Arsene Wenger the most sleep overnight will be the fact that some of the players were so woefully short of what is expected of them.

Olivier Giroud didn’t have a whiff of goal all match. After playing the whole game and with striking rival Walcott injured, a now potentially jaded Giroud will have to play against Swansea, with no chance of rotating the striking options. Joel Campbell huffed and puffed, but on the few sightings in an Arsenal jersey, looks to be a mark below what is required at The Emirates thus far.

The midfield was of a diabolical standard. Mathieu Flamini looked a shadow of the man who took North London rival tottenham to the sword in the previous round of this competiton. The young Iwobi, Bennacer and Kamara can avoid the burning glare of the focus from fans and the media due to their inexperience, but surely more was expected of these young men? With players like Hector Bellerin tearing up the rulebook when it comes to age, will parameters change for these kids? Do they have to show that they can mix it with the best from an even younger age? Whatever the answer, they can wipe this game from their own personal highlights reel.

Most worrying of all, for fans and Wenger alike, will be the men who made up the pitiful resistance that was meant to be the Arsenal defence.

Since Mathieu Debuchy’s injury last term, his return can only be viewed upon as a watershed moment, as ever since then, his performances have been insipid. This game saw him get schooled by a Championship team, which will do nothing for his flaky confidence. The Frenchman is not a bad player, but a run in the side cannot be further away as on this form, he cannot be trusted to keep his opposite number quiet.

The same can be said for Calum Chambers – who now appears to be going backwards in his development. Shaky under pressure, liable to errors and with a weakness at holding the line, the Englishman must now be taken under the wing of Koscielny and Mertesacker and more importantly, he must listen and soak up every word they offer him. His age can no longer be used as a shield when barbed comments are flung at him. It is high time to reveal the player he could be – potential is no longer enough.

Kieran Gibbs is another like Debuchy who has suffered in the shadow of another. Nacho Monreal’s constant reassuring performances are the one thing that Gibbs cannot offer. The Englishman has plateaued recently and must show more improvement if he isn’t to be forever consigned to the bench and forgotten in the minds of fans.

This match hasn’t derailed any title bid, nor has it ruined any of the confidence the Gunners have cultivated in recent matches. What is has done, has been to clear away any misconceptions in regards to squad strength. Our ranks were believed to be a little stronger than they actually are. On this showing, they are nowhere near what they are perceived to be and this creates a miasma of problems if injuries continue to persist.

If Bellerin or Monreal were to succumb to injury for a three week period, would Debuchy or Gibbs patrol their respective position with as much efficiency as their cohort? Would Chambers be able to stay watertight?

Sheffield Wednesday are to be congratulated for a fantastic performance. They warrant every compliment and Wenger rightfully commented on the Owls terrific showing;

They were faster, sharper and more decisive than us.

He should also thank them for highlighting some potential deficiencies in his squad that this result made painfully aware to him. They may be out of the Capital One Cup, it may be hazardous to read some of the headlines in the papers, but the focus remains the Premier League. A win at the Liberty Stadium in the weekend and this will be soon forgotten of.
The fans who travelled are worthy of a refund, they might not forget so easily.