Some players were born to lead their fellow man. Some have that special strand of DNA that is intrinsically linked with earning respect. That talismanic effect is absolutely vital in team sport and is mandatory if glory is to be achieved.

Our greatest ever Skippers are remembered thusly due to what they won. Tony Adams of course won nearly everything on offer and his effigy outside the Emirates is a reminder of what he did for the club. There is another that is hewn from the same granite though. Whilst his tenure at Arsenal was not the same length, the Double he helped win in 1971 helped to sculpt the club into what it is today and ended the clubs longest wait for a domestic trophy.

Ladies and Gentlemen, I present to you, an interview with Frank McLintock. 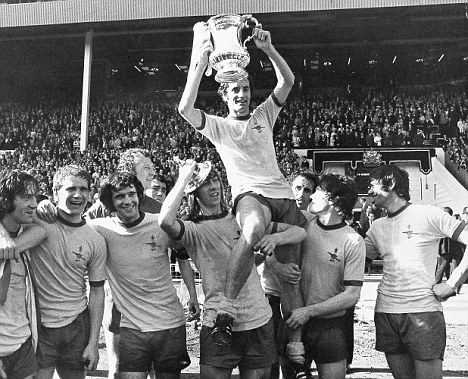 Q – You started your career with Leicester City, was there a reason your pro career began south of the Border?

Frank – Well, when I was 16 in a youth side in Scotland, I was five feet and two inches! I just felt that I would get a better chance in a youth team in England and work my way up.

Q – You suffered a terrible run at Wembley before 1971 changed that! Which final defeat would you say hurt the most?

Frank – When we lost to Swindon Town, they were in the 3rd Division at the time, but they had a really good team! Don Rogers was a part of that team, but there were reasons we didn’t play well. Prior to the game, there was a horse show on the Wembley pitch which cut up the turf and also, not using this as an excuse, but six of us had the flu just before the game. It was 1-1 and it went into extra time, but that’s when my legs went. I couldn’t go on. Swindon though, played really well.

Q – Who were you closest to in that excellent Double-winning team? Who organised the nights out?

Frank – George Graham and I roomed together for years. We were like twins, but he was so laid back it was ridiculous.  We’d be at training and he’d be taking the piss out of me when I spoke to the team. I never thought, out of any of them, that he’d end up being a manager! Especially the type of manager he became, he just never seemed the sort. He started at Millwall before coming to Arsenal and he was brilliant. I still play golf with George twice a week.

Q – Simpson, McNab and Rice were your partners in that watertight defence of 1970/71. All excellent defenders, but, if forced to choose, who would you go for?

Frank – Oh, that’s tough. Bob helped my transition from midfield to defence and would bark orders at me. Pat was only young and a bit inexperienced but his fitness was brilliant, he just kept going. Simpson was the most negative man I’ve ever played with, at training he was always like, ” Oh, Frank, we’ve got City next week and they’ve got Frannie Lee, Summerbell. We’re going to be right up against it.” Then we’d play them and he’d be immaculate! Our whole defence was quite small, but we all worked together and knew our jobs.

Q – Only nine caps for Scotland, despite all you achieved. Why did you not get the recognition on the international stage?

Frank – It was mostly the Glasgow Press. There were a few of us Anglo-Scots, who played in England. Denis Law, Ian Ure, Alan Gilzean. There were headlines like ” These men must go “. They wanted the players who played for Scottish teams to play instead. I should have risen above it, but I loved playing for my country, so it hurt. I can also say I never played my best for Scotland as I was so tense, expecting the criticism after every game.

Frank – Exactly what I thought. I mean, Ray Kennedy, he was so young when he was sold. That side still had so much left. Maybe Mee thought it needed freshening up? I didn’t think so. Don Howe had left and maybe Bertie missed that guidance that Don had given?

Q – Your replacement in the side, Jeff Blockley, was brought in during your last season. Was he as bad as all the fans thought?

Frank – I can’t answer that!! I was surprised!

Q – You had nine years at Arsenal, but no testimonial was awarded. It appears that you’ve been given short shrift by the club throughout. What is your perceived reason for the frostiness?

Frank – Well, Bertie Mee was like Captain Mainwaring ( Dads Army reference for all you kids ), he was very formal but that was his generation, but I was quite outspoken! At the end of my stay at Arsenal, I could’ve been sold on a free transfer and then get a signing on fee, but Arsenal wanted twenty-five thousand. I was 34 at the time! Just things like that really. There was no need. I loved the club.

Q –  Your QPR swansong nearly ended with the league title. Was Stan Bowles one of the best players you played with?

Frank –  Very much so. He was at Manchester City but fell out with them. He ended up at Carlisle before joining QPR. That side was brilliant. We had Gerry Francis, Davey Thomas,Dave Clement, Don Masson, Dave Webb, Gillard, Givens. We were so close!

Q  – You were one of the original faces of the Sky Sports News gang, fronted by Jeff Stelling. You were on camera for the match against Liverpool in the Champions League, the one where Ryan Babel dived to earn the winning penalty. How much did you want to punch Phil Thompson!?

Q – The 100 Club is the brainchild of you and Bob Wilson. How difficult was it to set up with the club?

Frank – I originally set it up and then Bob got on board. Other clubs looked after their ex-players better, but some ex-players, they earned little during their playing career and have nothing to show for it and are in their eighties. They can’t then help themselves. They certainly can’t afford £60 for a match ticket. The help we can give them is deserved after what they did and what they achieved.  I mean, when I was at Leicester, I was on £12 per week! Myself and Gordon Banks were the internationals, so we went to the bosses and demanded more money as we deserved it! We got it, but then the rest of the squad got a rise the next week and they all came to me and Gordon and thanked us for what we did! The money was vastly different. Eddie Kelly has been allowed a testimonial game at The Emirates on the 8th October. It’s a whole night and should be great fun, Arsenal have been very accommodating and have given us a Directors Box for the event and also put up two tickets for a Directors Box on a matchday, so it should be a great night.

Q – Frank, this has been fantastic, thank you. One last question before I let you go. What would you do to improve the current Arsenal side, including management?

Frank – Well, I watched them recently against Zagreb. The pressing game wasn’t good enough. At Barcelona, players are given 6 seconds to close the player down and if you watch them closely, it’s normally three players who do it to close down all avenues for the player to pass, so they eventually just lump it upfield in a panic. I would also have gotten a top class centre-forward if it was possible and cover for the boy Coquelin. I don’t think there was much out there though. Wenger I don’t think will change his policy but a little more defensive focus is needed I think. We’re now one of the richest clubs in the world, there should be no limits to what we can do. I don’t want Top 4. Wenger though, has so much faith in his players. In my opinion though, Arteta should maybe have gone in the summer.

I then expressed my thanks to him and that was that. I had just spoken to an Arsenal Double-Winning Captain! I do hope you all enjoy the interview, he was brilliant to speak to and I hope that comes across.