Four visits to Wembley and four losses. With a record like that, Francis McLintock could be forgiven for seeking the services of a soothsayer to remove whatever curse that may have been ailing his quest for glory.

But Frank didn’t look to superstition for answers, nor did he let these blows define his career. He relied on the asset that made his switch from defensive midfielder to centre-back so successful. His determination finally reaped dividends in 1970 and in 1971, he was the Leader of a team that made history for Arsenal.

Francis ‘Frank’ McLintock was born on the 28th of December 1939 in Scotland but started his career with Leicester City. Two of the four Cup Final losses were with the Foxes but his displays were impressive, earning him a move to Highbury in 1964. Frank had a choice to move to a powerful Leeds United side ( a team which had beaten him at Wembley ), but McLintock made the decision to come to Highbury. He was yearning for more successful climes. It would ultimately yield dividends in a gargantuan manner but he would have to bide his time before silverware was served.

Arsenal in the 1960’s though, were far removed from the team that was constructed by Bertie Mee. Poor League finishes, no Cup glory to speak of, Arsenal were floating in mediocrity. Manager Billy Wright had no discernible tactics according to McLintock, which saw a poor start for the Scot to his career for the Gunners. McLintock never rested on his laurels however, and rightly or wrongly, looked to change a cog or two at the club in order for a smoother running and eventual success. Engulfed in shadow by the Arsenal teams of the 1950’s, McLintock suggested they play entirely in red and remove all comparisons to the teams of the past. He also at one point put in a transfer request which was denied by the Board. 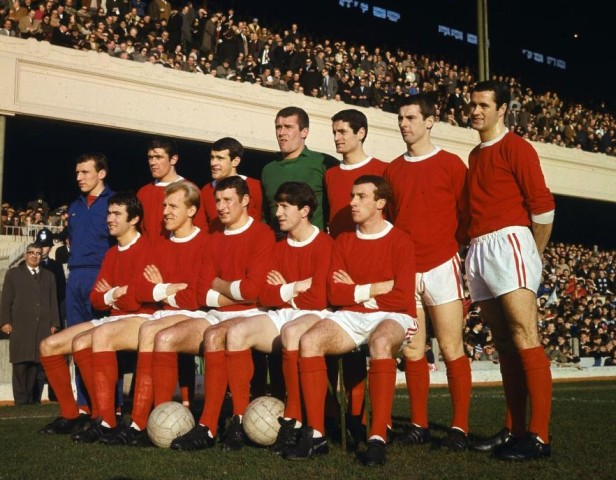 You couldn’t accuse Frank McLintock of being a yes man.

The changes geared towards distinction started when Bertie Mee took the reins and Don Howe became coach. They worked perfectly in tandem, utilising each others strengths and improvement happened, slowly but surely. McLintock was awarded the Skippers Armband and walked out as Captain at Wembley twice more, this time in red and white, but lost twice more – to Leeds Utd and agonisingly to 3rd Division Swindon Town.

Despite those painful defeats, Arsenal’s league placing had risen which saw them earn an Inter-Cities Fairs Cup place. This European campaign went all the way to the Final, in which the Gunners played Anderlecht in a two-legged affair. Despite a 3-1 loss in the first leg, a heroic 3-0 2nd leg win saw Arsenal and McLintock end a 17yr hiatus for silverware at Highbury.
This incredible comeback can be perceived as a cornerstone to the success achieved in 1971, and a large slice of credit can be attributed to McLintock. 3-1 down from the first leg, McLintock was the man who believed that it could be possible to still win. After the mauling the Belgians had given the Gunners, few thought it could be done, but when a man of McLintock’s stature states something, it must have been very easy to light the fires of motivation in the face of such insurmountable odds. My good friend and excellent researcher Les Crang told me that it was McLintock’s defining moment.

There was more to come from this side however.

The 1970/71 season and its subsequent success was built on a backline hewn from granite. The previous season saw Frank tried in the centre of the back four and his displays were so assured that he was to stay there, forming a bond with Peter Simpson that was watertight. Simpson was another Arsenal stalwart who was snubbed criminally for international recognition for England ( see Geordie Armstrong and Paul Davis ). Simpson was an excellent ally for McLintock as was Bob McNab and when you throw in Pat Rice, a clean sheet was nigh on expected every game.

Arsenal went on to win the Double and thus end McLintock’s wait for a trophy at Wembley. A more perfect fairytale you couldn’t write. After such an excruciating wait, watching as four teams held aloft the Cup as Frank resigned himself to another loser’s medal, this domestic campaign heralded the end of his torment and was testament to the grit the man possessed. He never gave up and he marshalled the teams defence expertly. Such was his fine craftsmanship that season, he was awarded the FWA Footballer of the Year.

After such a glittering season, the next few campaigns were never going to match the highs of 1971. McLintock eventually left Arsenal to join QPR in 1973, seeing out the remainder of his career at Loftus Road, before retiring from professional football in 1977. McLintock’s replacement at Arsenal was a certain Jeff Blockley, who is widely regarded as one of the worst signings the Gunners have made and Bertie Mee himself admitted he was a mistake. Large shoes to fill for Blockley made even more cavernous by the fact he was a travesty of a defender who inspired nothing like the confidence his Scottish predecessor did.

He wasn’t long away from football though, becoming manager of Leicester City and Brentford for a time. He was also Assistant Manager at Millwall and for a spell, became a football agent. A wide range of roles for a man who adored the game but not the trivialities that came with it.

McLintock is one of the 32 ex-players who are on the outside of The Emirates stadium for a reason. Every one of these greats etched their name into the annals of not only Arsenal history, but footballing tapestry. Arsenal’s Captain for their greatest success at the time. A true leader of men who let nothing stand in his way.

Obstacles were merely a distraction for McLintock. They may have led to run-ins with management and heated debate, but Frank and his steely gaze were not to be denied. The man was unbowed by Cup Final tragedy four times – a lesser player would be haunted perennially by such occurrences. McLintock though, was derived from the same stock that Tony Adams was borne from. Both were made to be leaders, both could muster bloodlust from their team even in the harshest of circumstances. The Armband they wore was not only a symbol of the respect they carried within the ranks, but also of how they both would have done anything to win for their beloved side. Unfortunately though, they both shared another similarity – they were dire managers and should now have high profile roles at Arsenal but have been overlooked thus far.

McLintock was chosen to lead the team which won the Double in 1971. That alone can never be overlooked. A total of 314 games, each played with the same desire as the last, which couldn’t be matched by most. 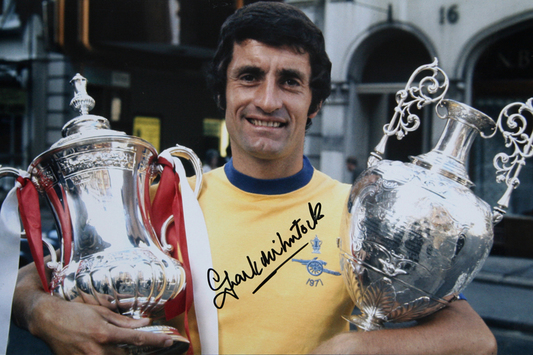 A lionheart at the back for Arsenal and a man who it must have been a pleasure to follow.