This match was the key.

What every Gooner across the world sought after was improvement. The purchases of Mesut Ozil and Alexis Sanchez brought excitement, but with an expectation of success. Top talent such as these players expect silverware and so do the fans.

On Saturday the thirtieth of May 2015, improvement was achieved. 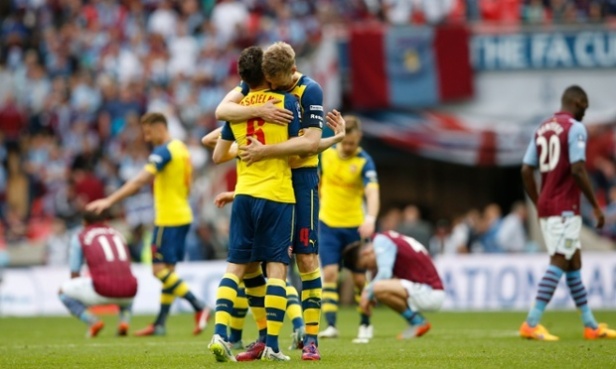 Seeing as ticket allocation was once again sparse – a twenty five thousand allocation to a club who has over forty thousand season ticket holders alone – it meant other avenues had to be pursued as Wembley was unavailable. Most chose Arsenal pubs and the photos that accompanied the tweets announcing this showed various watering holes colourfully adorned with red and white or yellow and blue decorations. Others teamed up with like-minded individuals and watched the cup final at home. I, along with thousands of others, bought a ticket to watch this titanic tussle at our home of football – The Emirates.

This enabled me to once more partake in my beloved match-day routine. This consists of a meal at Piebury Corner – pies to take your tastebuds on a joyride – and then on to the Tollington pub for a few whiskies. Normally refraining from imbibing alcohol, the Final inevitably heralds nerves that can only be quelled by a skinful

I met up with a few mates who were fantastic company and endured my repeated hugs and blatherings – thank you @Greenebantern – and after patiently waiting outside the stadium for a few minutes we were ushered in.

Every single spectator was handed a free yellow and blue commemorative scarf and we picked our spot. We discussed the inclusion of Theo Walcott over the powerful Giroud and then, the whistle peeped and we were off. 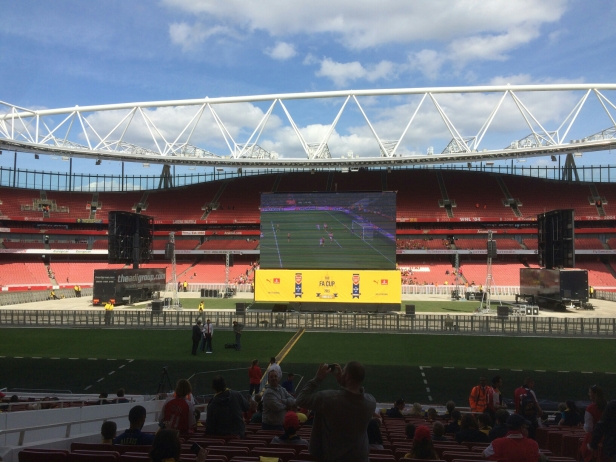 A lot of comparison was made with last years harrowing Cup Final Vs Hull. Pundits, writers and fans all were of the same opinion – we had more than enough in our armoury to win the Cup at a canter – but the longer the game dragged on without a goal, Villa would slowly come out of their defensive mindset and look to nick a goal from the lurking Christian Benteke.

Images of the first fifteen minutes from last years final swam across my vision. No doubt this was an affliction shared by all Gooners.  Would we make such a meal of affairs this time around? Would we ignore the pertinent lessons that needed to be heeded?

The players and Wenger before the Final insisted that we would employ our thrusting attack which has put many teams to the sword this season. Forget the insipid results that saw us end our season ( with the exception of the last game of the season of course ), we would employ pace, passing and speed of thought. Great soundbites on the eve of such an important fixture, but would we see the promises carried out?

From the off, we looked sharp. Alexis was at his hustling best and put himself in every position in order to affect proceedings. Mesut Ozil floated from flank to flank but more promisingly – when in possession – he was in the number 10 slot which allowed his eagle vision to be fully utilised. Theo Walcott looked like he had a point to prove. A hat-trick in the last game of the season Vs West Brom was enough to persuade Wenger to give him the nod over Giroud and if it weren’t for the flying body of Keiran Richardson early on in the first half blocking a Walcott goal-bound volley, Theo would have been celebrating opening the scoring.

He didn’t wait long though. A cross headed down by the effervescent Sanchez evaded the ball-watching Villa backline and an onrushing Walcott thumped a half-volley past an impressive Shay Given. All the more impressive is the fact that he smashed the ball home on his weaker left foot. Theo roared with delight and so did millions of Gooners. At the Emirates, my throat erupted in a cacophony of nonsense as all coherent thought left my brain. Could this be the start of a tension-free Final? the anti-thesis of the drama of last year?

Aside from a cross that caused Szczesny to stretch every sinew of his nicotine-addled body and clatter into the intended target – who else but Benteke – Aston Villa caused little problems to our rearguard. This allowed us to put the onus on attack.

The second half started much the same as the first. Arsenal in the ascendency and looking to land the telling blow on an increasingly punch-drunk opponent. Make no mistake, Villa were poor and their tactics – whilst necessary – were ill-advised. No matter what team they chose or formation they selected, they were going to be beaten. Not one of their players could cope with the rapier rapidity of our movement and it was no surprise when we got our second with just five minutes expired of the second half. The manner of the goal though, sparked a frenzy amongst fans.

Sanchez jinked and shimmied and when roughly thirty yards away from goal, launched a howitzer of a shot that Given could only flail at. It fizzed over him and struck the underside of the crossbar. The replays were cheered for as nearly as much as the goal due to most being unable to track the movement of the ball thanks to its speed!

Tim Sherwood ( he is a Gooner don’t you know ) decided it was now or never and made two substitutions. Agbonlahor, the shock exclusion in favour of Charles N’Zogbia, swapped places with his replacement in the starting line-up and Villa fans could be excused for renewed optimism. It changed nothing. Arsenal probed and pressed and had the scent for goals.

For our Captain to score the third was poetic justice for our lanky German. He has faced criticism, calls for him to be chopped and he still performs all extra-curricular activities with the same enthusiasm as when he sets foot on the pitch. He rose highest to nod home past a now hapless Given and he sped off toward the corner of the pitch – or at least as fast as he can manage – and his teammates swamped him in congratulatory embrace. It was an emotional sight and  – despite being soaked with beer from the clumsy oaf behind me – my cadre and I all matched the emotion unfolding on the pitch by hugging with glee.

This was turning into the perfect Cup Final. Far removed from the angst-filled 3-2 victory last season, the Arsenal swagger and bravado had returned. Ozil put clean through evidenced this perfectly by choosing to evade two challenges rather than run toward goal. We were toying with them, like a cat pawing at a bewildered rodent.

We soon tired of the fun of the kill. We wanted to end their suffering, swiftly.

Before the coup de grace, a handful of exuberant Gooners stormed the pitch. This was followed by a larger pocket of fans following suit. We had discussed with each other the prosepct of setting foot on the hallowed turf of The Emirates and share the footsteps of our heroes as fans did last year. We didn’t want to get our hopes up throughout the game but as more and more gleeful Gooners ran past the now futile stewards, we saw our chance to steal a memory that could be used in the future to shed light on darker days upon recollection.

I set my phone camera to video and started recording as I sped toward the pitch. I passed the steward and thanked him for my unhindered progress from stand to grass. He smiled and with that, I was on the pitch. We sang. We rejoiced. It may sound cliche, but joy was everywhere. On every face, in every gesture. It was unbridled happiness and for once during the game, I stopped singing. I stopped to take in every angle and then stooped to kiss the blades of grass that were lovingly brushing at my footwear. Shades of Henry in the last game of Highbury peppered my brain. I am not ashamed to admit I became a little overwhelmed. Then, a brainwave came to me. A moment of inspiration. I was on the pitch that was the stomping ground of footballing iconography. How else could I stamp this moment into my conscience? What else could I do whilst the opportunity was with me?

I ate some pitch. I devoured some turf. I munched on the grass. My thinking, whilst undoubtedly skewed by several whisky and lemonades and the pure exultation of the day, was that the Emirates grass would be digested and would transfer the nutrients to my body. It would forever become a part of me, I would always have the Emirates pitch with me.

Great sentiment, but chewing it was a tough job. I decided to sing once more, with a raspy rendition of ‘She Wore’ the lucky people around me would be privy to. I lay on the pitch and belted out every word. As I did this, second half substitute Olivier Giroud employed his predator-like front post finishing skills with aplomb. 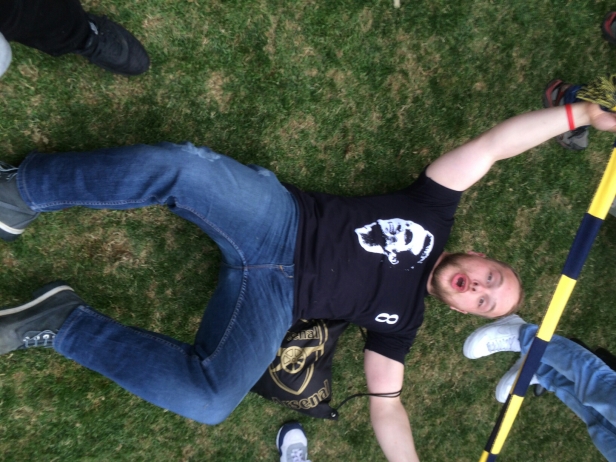 A fourth goal. An F.A Cup win and here I was, lying on the Emirates pitch. My mind, realising that I’m meant to be a dour Scot, switched swiftly to stereotype and reminded me that this was probably the pinnacle of fandom – so what if this is as good as it gets? Will anything match up to this?

Probably not. I have these precious memories to hold on to though. We have won a record 12th Cup. We are the most successful club in this historic competition. An epic day I will always cherish. Thank you Arsenal. 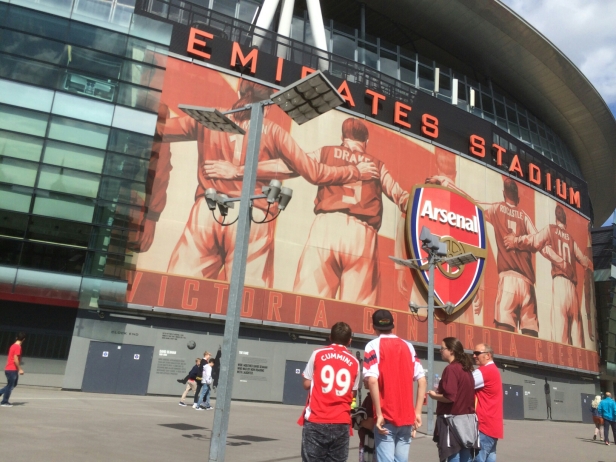