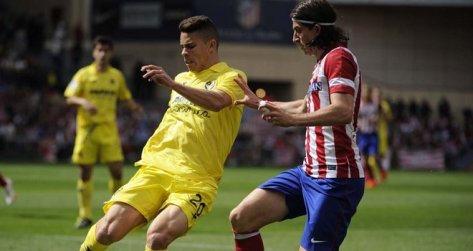 So it has been confirmed – work permit aside – that Gabriel Paulista of Villarreal has signed for Arsenal and therefore bolstered our defensive ranks. Before Transfer Deadline Day and Jim White has hoovered the last remnant of Bolivian marching powder from the Sky Sports News desk. Cripes.

This also brings in the welcome news our glorious leader Arsene Wenger can actually acknowledge a weakness and move swiftly to address them. Even better than that, he has tied in Joel Campbell within the framework of the deal. Campbell, who was used less than that can of pickled herring at the back of your cupboard. Or used less than Jose Mourinho’s brain-to-mouth filter. Whichever you prefer.

Poor Campbell. He blazed a trail at the World Cup for his country and waltzed back to The Emirates fully expecting Wenger to high-5 him and unfurl a scroll of the finest parchment which enclosed details of a lucrative contract with promises of a first-team slot. Instead of this, he has proceeded to build the finest rapport with Vik Akers on the sub’s bench and play approximately 26 seconds of football. He now gets the same deal our beautiful Sanogo gets. Perform well at your loan club or you can say goodbye to that wonderful match day suit. This may seem a little cut throat but he do want ply his trade at Greenock Morton. Each decision Wenger makes has the potential to propel the team faster towards etching their name on more silverware or lurching Arsene towards more vilification. He cannot allow a capacity for empathy. He must do what is right for the team and Olly, Welbeck and Sanchez have earned the right to be looking back at Joel in the attacking queue.

Anyway, back to Gabriel Paulista.  He was left out of the latest match day squad and since that moment, at least fifty overweight men who are too dependent on their mother have been sitting on the edge of their novelty Wolverine pants. Waiting with putrid breath for the confirmation that they “broke”. Well now they can celebrate because he is now Arsenal bound. The fee has been bandied around and is anywhere between £11m and £13m. For a defender who has the second highest amount of interceptions in La Liga, it doesn’t seem like an overspend.

To put that into a little more perspective – that was achieved before the Brazilian hits 25. A few months to learn the pace of the League and glean the vast experience of his defensive cohorts Koscielny and Mertesacker and that stat will be accompanied by bottles of Man of the Match bubbly. He’s been scouted extensively so he should be a great fit.

Back to the point about Gabriel acclimatising – Gooners need to exercise the rarest of all traits……patience. Much like Ozil and his baptism of fire – it will be a slow burner. He may fit in our back line like a Duplo block at a Lego party. The point is though that he has a huge amount of talent that if we nurture, will come to the fore and we will benefit from that.

Seeing as our back line has seen so many combinations due to injuries, we may need our Gabriel to fit in quicker than he may be comfortable with. He will be gently dipped in and out of the side – much like when you run a bath that’s too hot – but an enforced run in the team cannot be too far away when you have opponents like Stoke.

Let’s concentrate on the positives though. We’ve signed a promising defender that solidifies a weakness that enemies could have targeted. All for a price that didn’t involve a loan from Sugar Daddy Kroenke.  I think Wenger has done well. We do have history with defenders and Villarreal though. Can we trust a team who think its a good idea to buy Pascal Cygan from us?