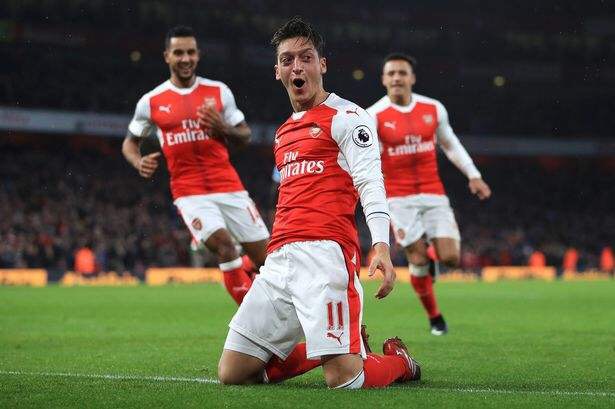 Forget about our recent thumpings of West Ham and Basel; if Arsenal fans are looking for real reasons for optimism – THIS win showed that the Gunners are up for the fight.

A goal down and an injury to one of our starting defenders put us in an awkward position, but we pushed on to grab victory.

Goals from Theo Walcott, Mesut Özil and Alex Iwobi saw Arsenal come back from a goal behind to emphatically grab all 3 points – and go top of the Premier League in the process.

The match began well, with the home side bossing possession, and Stoke looking to utilise Arnautovic and Shaqiri on the break. The Gunners were edging the game and going through the gears, before Shkodran Mustafi went down with a suspected hamstring injury.

Only just declared fit, Hector Bellerin came on and replaced Gabriel on the right of defence, who took the spot vacated by Mustafi. Three minutes later, Stoke were ahead.

Against the run of play, Stoke were gifted a penalty, as Joe Allen ghosted into the box ahead of Xhaka, who was set to clear. Allen was brought down, and Charlie Adam converted from the spot.

Arsenal were behind, and had only been behind for 73 minutes this season in total. This was proving to be a crunch match, a decisive moment.

Bellerin made an instant difference, and it was his first time ball into the box which saw a vibrant Theo finish well and equalise. It was Walcott’s 100th goal for Arsenal, and his 50th at The Emirates.

The second half saw the Gunners bring extra gunpowder. The Ox and Theo in particular, were terrorising Stoke’s backline, and they had the Potters stricken in their own last third.

It took only three minutes for Wenger’s side to convert their dominance into the lead, and it was a thing of beauty.

The Ox had the ball in the centre of Stoke’s half and picked out Özil who had made a run into the box. He then proceeded to lob the ball over Lee Grant, the away keeper, with his head and the ball sailed over the timewasting keeper and into his goal.

It wasn’t over though. Arsenal were playing well and toying with Stoke, who did have a few chances but Cech was equal to them.

Alex Iwobi tied up the points, as referee played advantage with Sanchez being fouled. Iwobi had continued his run and a low finish across Grant made it 3-1.

The game had ample chances and lots of incident, so here are the 5 key points from the 90 minutes;

Before the young Spaniard was introduced, Arsenal were having the better of the game. Upon his arrival, he found his team a goal down instantly, but Bellerin showed no signs of rust after his layoff. His constant availability and running was a nightmare to track and it was his ball that brought about our equaliser. Gabriel has been solid, but my, how we’ve missed Bellerin’s fizz.

Özil operates on a different stratosphere

The special players of this world are capable of magic, and Özil’s header was certainly that. Not many players would have opted for his lobbed heads finish, as it was technically difficult, but Mesut made it look like child’s play. Time seemed to stand still, but it certainly wasn’t and he had milliseconds to first decide, and then implement, his plan. Wonderful.


A tip of the hat to the referee.

The match officials get a crapload of stick, so when they make a correct decision that the majority of their colleagues would fail on, it is important to commend them. Lee Mason saw the obvious foul on Alexis as he was looking to get into the box, but had enough savvy to see Iwobi could pick up the pieces of the attack. Fair play.


Stoke may be prettier, but they’re still the kings of Gamesmanship

They may not play constant 80yrd passes, but the fact that Stoke were persistently wasting time – in the first half – tells you all you need to know about their game plan. Arsenal heads kept cool though, which is another plus.

We have been in promising positions before, but regardless, we sit top of the Premier League until Chelsea play later. We have also banged in more goals than any side, and our current league run is the best we’ve enjoyed for six years. If we can’t enjoy being a Gooner now, then when can we?

There was a lot more to write about as well.

Alex Oxlade-Chamberlain is showing consistency and lowering his rate of error, and he was excellent in this game. Coquelin kept it simple, and Xhaka was the bridge between defence and attack. We coped ever so well with whatever Stoke threw at us and we looked like we could break them open at will.
Oh yes, I also called the correct score line in my match preview. You may call me your oracle now.

Next up is a trip to Goodison Park on Tuesday. On this form, we will be a real test for anyone. 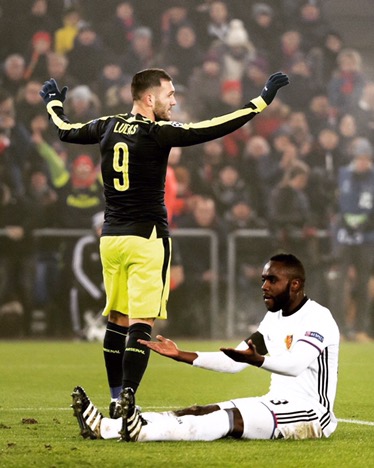 This match was set up to be the typical Arsenal Euro tie.

A necessity for rotation would see a weakened side rock up to St Jakob Park and lose with an insipid performance – only to see the result they were hanging on for come to fruition.

Well, the script didn’t come into play, as the Gunners ran riot and won handsomely – all while rotating the squad just enough to rest some first teamers.

Not only that, but Ludogorets defied the odds and grabbed a point in Paris – thus handing the Gunners top spot in the group. 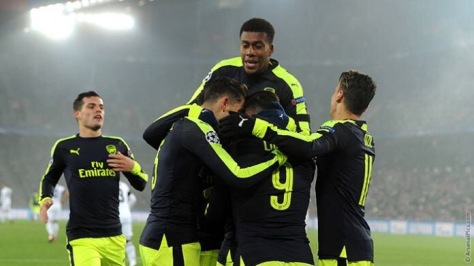 Bayern Munich and Real Madrid may lay in wait in the knockout stages, but Arsenal have finished top of their group for the first time in five years.

A hat-trick from Lucas Perez and a fourth from Alex Iwobi earned the win in Switzerland, and the potentially tricky match against Stoke on Saturday will be a lot easier knowing Mustafi, Cech, Theo and a few others will be far fresher than if they were to have played against Basel.

Also, confidence will have been imbued within some of our players who have flitted in and out of the side.

Here are 5 key points from the 90mins:
Lucas Perez up to speed 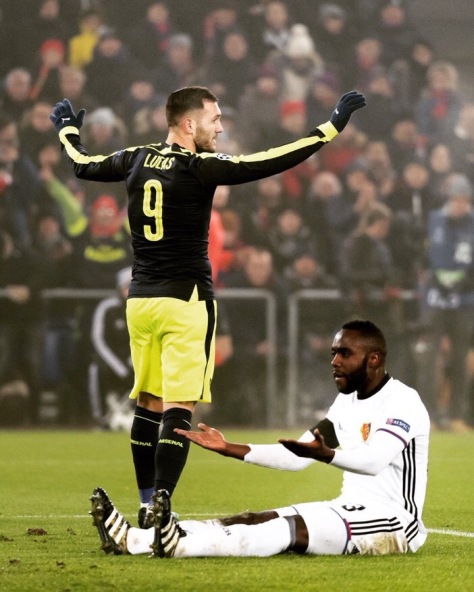 The Spaniard was only declared fully fit last week, and played in the EFL Cup loss to Southampton. Yet he showed great instinct to score his first two and grabbed his Hattrick with his right foot with a smart finish. Lucas could be a great option with so many fixtures coming up.
Gibbs with 3 assists

Gibbs has been the epitome of professionalism while Montreal has been enjoying first choice status, but he hasn’t been resting on his laurels. The Englishman has improved, and his final ball and attacking runs caused havoc against Basel. Great to see.
Alexis and Özil given 40winks

Much of the talk before the game was whether our two star players would be given a rest. They weren’t, as Wenger chased the unlikely prospect of top spot in the group. It paid off, and the two players were taken off in the 74th minute. Not much, but better than the whole 90. Every little will help with the slew of games coming up.
Holding highly regarded

Rob Holding was given another start, and the young lad continues to impress. Alongside Koscielny, he showed excellent positioning and aerial prowess. If he continues this progress, what a player we will have in the future.
Top spot matters

People will deride the fact that we have finished 1st, stating that we will still likely get a tough draw with Bayern Munich and Real Madrid potential opponents. What does come into play will be home advantage – the second leg will be at home. A slim plus, but a plus nonetheless – and any advantage is a good one in the knockout stages.
There was more to take from the game, such as another solid game from Gabriel and Iwobi looking a little more assured than of late, but the above really stood out as the big talking points of the game.

We took top spot, we won convincingly again and we took care of our squad.

Good times. As Arsenal fans, we should enjoy them when they’re here. That’s why we are fans.

Onwards to the Stoke game!

A look at this weekends massive match between two of the leading contenders for the title.

At the start of the season, many would not have believed that Arsenal’s home clash against Leicester City next weekend would have so much riding on it. Leicester are flying high at the top of the league but the Gunners remain hot on their heels after a much-needed win over Bournemouth. 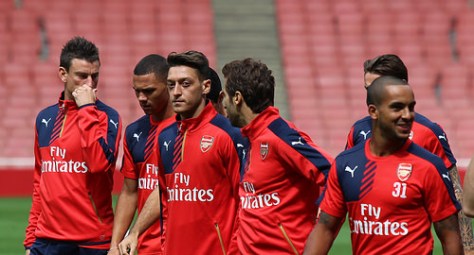