For fifteen years, Paul Vincent Davis was a Gunner.

From his debut in 1980 – in a derby no less – all the way to his injury hit last year in 1995, Davis embodied the drive, hunger and above all, class, that is synonymous with our club. The phrase, ‘The Arsenal Way’ could well be written within every DNA strand of the man.

Davis signed as an apprentice in 1977, and it didn’t take long for him to start pushing toward the first team. The central midfielder built a reputation for his patrolling of the centre of a pitch, and his Swiss Army Knife-like set of skills. 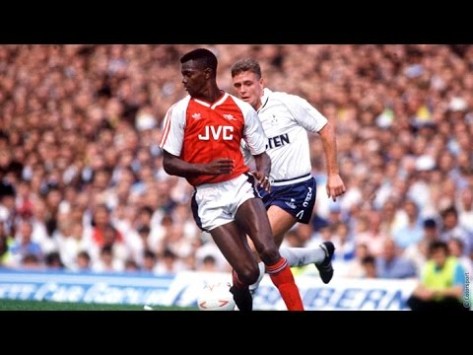 You needed a pass? No problem. Tracking back? He’s got it covered. Tackling? Those telescopic legs were made for hooking the ball back. Davis had it all, and a player doesn’t become a mainstay of a top-flight club for such a long time without earning it.

No matter who he partnered, he moulded himself to fit the strengths of his other half in the centre. Most famously was perhaps his iconic duopoly with Mickey Thomas. Whereas Mickey had a great ability to ghost into the box to aid our attack, Davis knew when to stand sentry, and when to pivot. They dovetailed perfectly, and in 89, their partnership was the ideal platform for the most dramatic title triumph.

It was no coincidence that an injury to Davis coincided with a faltering of Arsenal’s title charge. Dropped points to QPR, Coventry, Millwall, Forest and Charlton saw Liverpool claw their way back, and upon Davis’ return – the draw versus the Addicks, we started to claw our way back from the brink.

Two title wins, four cups and earning more appearances than the majority of our past and current crops, Davis may have fought his fair share of injuries, but he was one of our own.

Not only that, but he was one of the flagbearers for racial equality within football – a battle that is still being fought. He, with a select few others, showed that Arsenal saw no colour, only talent, and Davis never let the bias get him down, as he steamrollered opponents no matter where or when.

He was a soldier for race and for Arsenal, and it was absolutely criminal that Davis never established himself on the England scene. Davis made 11 England Under-21 appearances, but not one cap for the full side. Davis would no doubt have added to England’s cause during his time at the top, and his pedigree of passing was difficult to match in the top-flight.

Davis continues to fight racism as an ambassador for ‘Give racism the red card’ and ‘Kick it out’ but it is his displays in our title winning teams of 89 and 91 that we will always hold dear and ensure Davis is and always will be, considered one of our Greatest Gunners.

Davis was a Gunner for fifteen years, helped bring glory to the club through silverware, and never let his standards drop throughout that time. He was a fine example to those younger than him of what it takes to make it. Tenacity, a thirst for betterment and a will to win that is never dampened throughout the years.

Can we say that Davis is one of our finest? Of course, there aren’t many in the modern era that can hold a candle, Vieira aside. Davis ticked all boxes.

Davis in non-Arsenal circles will always be remembered for punching Glenn Cockerill, but we will remember him for much more than that.

A bona-fide Arsenal legend, who bleeds red and white.