Not a ratio to be sniffed at, but at the base level, this is what Olivier Giroud brought to the table for Arsenal.

We overlook the way he held the line valiantly, alone, for so many seasons.

We miss out on him holding up the ball not only with his physical edge, but his nous in and around the box.

We also miss out on the fact he tarnished his Arsenal legacy with his actions in a Chelsea shirt.

Giroud came so close to cementing his reputation as a Gooner favourite. While we lamented the fact he was never a 20 goal a season man, the majority of us saw him and his talents as precious – he helped the team with his actions.

He wasn’t just about goals, but the above ratio is not poor. Upon joining Arsenal, he had just been the talisman for Montpellier winning their first Ligue Un Championnat. He joined in the same window as Santi Cazorla, Lukas Podolski – we had signed attacking players that would boost our threat.

This was certainly true for the three above, but Giroud never materialised as we thought he would. He scored valuable goals and always earned a respectable number, but he was never a goal machine. Still, his biggest asset was that his touch and awareness led to him being part of some magnificent goals and moments.

In his career in our red and white, his highlights reel will live on. Some truly breathtaking goals were bagged, and his part in Aaron Ramsey’s late winner in the 2014 FA Cup Final cannot be overstated. Giroud loved the club while he was here and never wanted to leave, but squad competition meant if he wanted regular gametime, he would need to find pastures new.

His move to Chelsea was a stark reminder that professional football is still, at the bottom line, just a job to the majority of players. He made the right choice as his modus operandi in choosing a new destination was that he wanted to stay in London for family reasons.

Chelsea needed a frontman, and Giroud embarked on a trip to West London.

This was more than enough for some fans to cut the ties we had with Giroud, but his over-exuberant celebrations after one of our worst days on a football pitch – the 4-1 hammering at the hands of the Blues in the Europa League final – was the straw that broke the camels back in terms of his Arsenal legacy.

Olivier Giroud, if he had kept his nose clean and performed in the respectful manner that he did in his time with us, would have always had a home with the Arsenal faithful. We would always remember his efforts kindly. He stayed while we struggled. He gave his all for us and left us with some truly treasured memories.

Instead, he is now just remembered as being part of the Arsenal framework that led to our slide out of the Champions League. Even looking back at his famous, Puskas-winning scorpion goal doesn’t do it anymore. Giroud has burned the nerve endings. 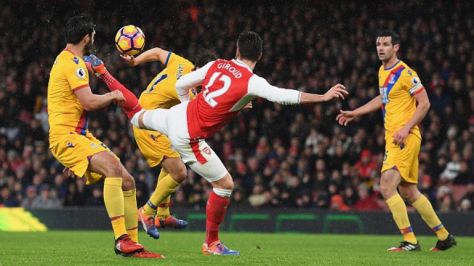 It isn’t as bad as the likes of Ashley Cole, Robin Van Persie or Adebayor – those players ended up being panto villains. But where there was real affection for the player – now there is just a vacuous space.

Oivier Giroud could have left something truly special, but in his job search and his antics thereafter – he tainted what he had left us.